The Dark Net aims to examine the most innovative and dangerous online subcultures: trolls and pornographers, drug dealers and hackers, political extremists and computer scientists, Bitcoin programmers and self-harmers, libertarians and vigilantes. Ian Hargreaves finds that some of Jamie Bartlett’s arguments seem out of tune with the times, though the book remains an illuminating read.

Before dimming the lights for Jamie Bartlett’s Dark Net show, let’s deal with the starter question: what exactly is it, the Dark Net?

Bartlett’s definition is broad. It starts with the cypherpunk’s encrypted world, where anonymised online activity passes through a browser called TOR (‘the onion router’) and extends to the realm of password-protected pages, unlinked websites and intentionally harder-to-find content, before reaching the land of Dark-lite, where most of us live our online lives and where Dark Net villains conduct their scams and pseudonymous trolls dish out verbal abuse.

Bartlett is an amiable guide. He is not blind to the morally disturbing characteristics of virtual homo sapiens, but he sets out chiefly to report rather than to judge.

His tour takes us into the world of racist politics, inhabited by the likes of Anders Behring Breivik, the Islamophobic Norwegian who shot dead 77 people in 2011. We witness a live web-cam show where three young women perform sexual acts in return for tips. Their disruptive business model, we are told, helps explain a 50 per cent drop in the ‘official’ porn industry’s takings. We hear about a website where visitors consider fantasy assassinations and others which specialise in suicide. Here we encounter the story of a 19-year-old Canadian woman who in 2008 killed herself to contract, watched and encouraged by her female co-signatory to a suicide pact, who turned out in reality to be a middle aged family man. William Melchert-Dinkel has since been convicted of two offences involving the encouragement of suicide.

We also meet some of the people – here presented as hard-working anarchists – behind the online currency Bitcoin, which promotes the goal of anonymous financial transactions. Even as Bitcoin edges its way towards a potentially mainstream role, these pioneers continue to dream the libertarian dream of ‘a decentralised net that no-one can censor.’ Moving along, we experience the Dark Net version of e-commerce on the infamous Silk Road. The author, having checked out consumer advice on the dark equivalent of (sorry) Trip Advisor, buys marijuana and finds it to be of good quality.

Anyone not already familiar with this virtual Hieronymus Bosch landscape will find Bartlett’s tour informative. We cannot understand the internet, or think about how we would like it to develop further, without taking into account its darkness. Bartlett himself, however, is inclined to look on the bright side. Without making claims for his work as structured social science, he mentions data obtained from various studies to support his view that the Dark Net should be seen primarily as a resource rather than a threat to civilised values.

He argues that social networks devoted to suicide are, on balance, a good thing, providing informed and empathetic conversation for the mentally ill, which may well mean that they prevent more suicides than they motivate or assist.  He notes that suicide rates in the UK have maintained their long downward trend during the internet’s first quarter century.

He also draws upon empirical research about the incidence of self-harm to support his view that ‘pro-ana’ websites which discuss, and arguably ‘thinspire’ mostly female anorexia, are better seen as a point of collaboration for more mainstream interventions and care strategies (e.g. Samaritans) than places to be shunned or destroyed. ‘Self harm and suicide forums,’ he concludes, ‘are filling a gap in health provision.’ Given the lamentable state of mental health care in many countries, that may represent a valid insight.

Not so Bartlett’s encounter with a British political activist, supporter of the English Defence League and admirer of Breivik. This man spends many hours online every day violently abusing people whose ethnicity, religion or views he dislikes. In the flesh, Bartlett finds the uber troll a shy man who talks enjoyably about football. The reader is left unclear whether online crimes are mitigated by offline personality.

Bartlett also thinks that Vex, a star of the subterranean world of live webcam sex shows, is a ‘motivated, self starting entrepreneur who has found a clever way to create a successful business at a time when one in five people her age are unemployed.’ Then, having bagged a little weed on the Dark Net’s Silk Road, he declares that his over-riding reaction is to admire ‘one of the most resilient dynamic and consumer friendly marketplaces I’ve ever seen.’

It is hardly surprising then that when Bartlett sets himself the standard exam question of what might be done to curb or regulate the online monster which stalks living rooms and our children’s smart phones, he emerges as the Master of Chillax. He writes: ‘Whether it was anarchist Bitcoin programmers, trolls, extremists, pornographers or enthusiastic self-harmers, all were more welcoming and pleasant, more interesting and multifaceted, than I’d imagined. Ultimately, the dark net is nothing more than a mirror of society.’ This is a worrying cliché, much used in a vanishing age by over-aggressive journalists to disown moral responsibility for the consequences of their work.

Because the Dark Net, in Bartlett’s view ‘fosters breathtaking creativity, ’ it follows that ‘rather than spend our energy on trying to censor, regulate and close these sites we would do better to learn from them and work out how we might use the technology they have ruthlessly exploited for good.’

In a world increasingly alarmed by a fragmenting global order and fitful economic growth, this libertarian strand of thought, reaching back to the infancy of the internet, is increasingly out of tune with the times. It is an argument impossible to imagine being made today by any mainstream politician on the continent of Europe.

Yet Bartlett is surely right that we should not imagine monsters where none exist and that we should treasure the creativity of the internet. His book does not deal with the trade-offs which must now be negotiated between privacy, free expression and competitive commercial markets. In all of these areas, there is much to learn from the Dark Net.

Ian Hargreaves is Professor of Digital Economy at Cardiff University.  He is co-author of A Manifesto for the Creative Economy (Nesta 2013) and author of Digital Opportunity: a Review of Intellectual Property and Growth (HMG 2011). Read more reviews by Ian. 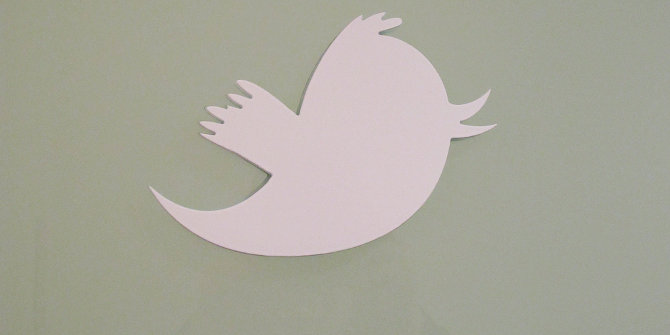