The Meaning of Matrimony attempts to capture the key arguments for and against marriage for gay couples in England and Wales. The contributors consider whether the Government’s legislation for same-sex marriage is liberal or illiberal; whether marriage should embody ‘tradition’ or social change; who speaks for the support and opposition of same-sex marriage; and importantly, the function marriage performs in society. Sneha Knrishnan feels that a more diverse selection of voices should have been included, and that issues intricately connected to the debate on gay marriage – such as immigration and social welfare – should not have been sidelined. 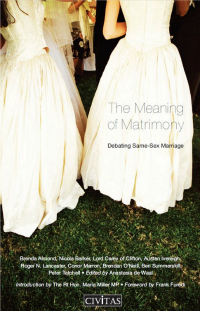