Alastair Hill finds Peter King‘s book to be an excellent exploration in to the threads of Conservative thinking, showing how Cameron’s Conservatives feasibly fit into the wider tradition. 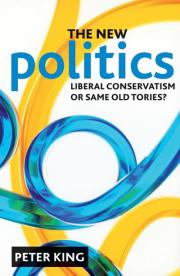 Many commentators remain unconvinced about David Cameron’s labelling of his party as ‘Progressive’ or ‘Liberal’ Conservatives. To the sceptics they remain the ‘same old Tories’, who are not that ‘new’ at all. But what do these criticisms actually mean, and how substantial are they?  Peter King’s book sets to explore these two questions by exploring the place of Cameron’s 2010 Conservative party with reference to both wider conservative political philosophy and the party’s recent history in government.

King first focuses on conservative philosophy, asserting the often neglected view of conservatism as a disposition rather than an ideology or body of normative recommendations. In societies and the activity of politics, change is inevitable, and in this sense politics is always ‘new’ by its very nature. What is crucial for the conservative however is what role government should play in addressing change. Government for conservatives, writes King, should be viewed simply as a means to a given end, but rather as a distinct end in itself. Borrowing the conservative philosopher Michael Oakeshott’s useful terminology, government is not an ‘enterprise association’ in which a particular goal is pursued, but rather an activity with no end in itself other than its own maintenance. Those of a conservative disposition will act in government to manage the circumstances of the day as they arise, rather than predict change in accordance with a wider ‘enterprise’, or ideological goal.

King sees Cameron’s conservatism in much the same philosophical terms. Rather than being based on a more cynical ideologically-motivated attempt to debilitate the Tory right as well-known commentators such as Simon Heffer have suggested, Cameron’s decision to join the Coalition can clearly be viewed as a non-ideological response to the economic circumstances of the day to maintain the activity of government in the national interest. Thus King’s fundamental argument is that Cameron’s Conservatives are both ‘new’, because the political circumstances of the day clearly require novel responses, but they are also just the same old Tories in that they are reacting to the challenges at hand rather than pursuing wider ideological goals.

King’s book is excellent in exploring the threads of Conservative thinking, and makes a powerful argument for how Cameron’s Conservatives can feasibly fit into the wider tradition. Nevertheless, the  prevalent debate at present is not about  the wider philosophical underpinnings of the 2010 Conservative Party, but rather the specific policy reactions it is currently deploying to ‘remake’ to the present circumstances. The clear question for many commentators remains to what extent his party have broken from an adherence to Thatcherite economics.

King is acutely aware of this, and he goes on to address the similarities between Thatcher’s 1976 and Cameron’s 2010 Conservatives in the fifth chapter of his book. The similarities which he sees are not ideological however, but the manner of reaction to certain circumstances. Like Cameron, Thatcher’s Conservative Party represented both new politics, in that the set of political circumstances facing the 1976 Conservatives were distinctly novel, but also they were the ‘same old Tories’ because they sought to react to the present set of circumstances rather than follow a distinct ideology. Both the Conservatives of the 1970s and 2010 called for change in response to the political situation as it stood, but not alongside an overarching vision.

A weakness of King’s analysis is that it is essentially based on what was written in campaign manifestos rather than the policy. Although he suggests it would be difficult to compare the two policy-wise given historical circumstance, it stills seems to me a more fruitful line of inquiry. In fact he clearly notes the quip by Mario Cuomo, former New York Governor’s that “Politicians campaign in poetry but have to govern in prose”, without realising the potential shortcomings of an analysis of the similarities of Thatcher and Cameron’s Conservatives largely based on manifesto documents. The clear theme apparent in the “prose” of Thatcher’s government was a policy adherence to neoliberal economics. King is right that politics is almost always about reacting to change, or “events, dear boy, events” as MacMillan put it, but the charge of ideology is still relevant depending on how parties react to such change. Perhaps tellingly, Oakeshott himself was particularly critical of how Thatcherism on the basis that it was too overtly ideological.

Although Cameron’s Conservatives have only been in power just over a year, there is little in the “prose” to suggest that his government has eschewed it’s adherence to old Conservative economic policy, despite the recent failings of neoliberalism. The ‘Big Society’ policy umbrella by which Cameron seeks to define himself, as articulated by its chief theoretical architect Phillip Blond, actually offers a critique of the pernicious effect of both neoliberal Thatcherism, and Labour state largesse. Despite this, Cameron’s government’s uptake seems to largely ignore the former. ‘Same old Tories’ can thus still be easily interpreted as a critique of a party failing to accept the bankruptcies of old neoliberal economic ideology, rather than just a pragmatic party in coalition purely to govern as an end in itself to uphold the national interest.

Alastair Hill graduated from the LSE in 2010 in MSc Political Theory, and now works for a political consultancy company.