In the context of the continuing global Occupy movement, The Tyranny of Choice adds an eloquent voice to the growing expression of dissatisfaction at the lack of any real democratic social choice and an increasing sense of the need for an alternative social system, finds Kalim Patel in his review of Renata Salecl’s recent work. 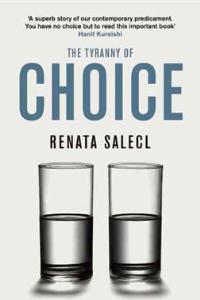 Whether it be the imperative to pick one’s ideal identity and lifestyle, or simply agonising over selecting from the latest smartphones, holiday deals, or Starbucks coffee combinations, there is an awful lot we are expected to choose from these days. Renata Salecl, visiting professor at Birkbeck College School of Law, analyses this superabundance of options and the role it plays in post-industrial capitalist societies in her compelling new book The Tyranny of Choice.

The idea that we can and must choose who we want to be comes at us from every angle. Slogans telling us to ‘Have It Your Way’ and magazines proclaiming ‘Become yourself – only a better version’ all feed into the myth that we are entirely at liberty to decide how our lives unfold. This is of course exemplified in the consumer marketplace where we are presented with an almost infinite amount of choice in phones, foods, clothes, service providers and so on.

But the supermarket-shelf mentality, Salecl argues, has also permeated many other aspects of our lives. The consumerist emphasis on the importance of choice now equally applies to decisions regarding lifestyle, career and indeed partners. (Salecl can perhaps be forgiven here for breaking her own rule regarding the switching of partners, given that she was formerly married to the brilliant but no doubt impossible Slavoj Zizek).

Yet far from allowing us the freedom to fashion perfect lives for ourselves, Salecl argues, the obsession with choice instead burdens us with feelings of anxiety and guilt. If we are unable to achieve financial success or a position of status in the eyes of others, we feel we that we must simply have failed to choose successfully.

As individuals become increasingly wrapped up in their own choice-related anxiety and the constant desire for ‘self-improvement’ they lose the broader perspective necessary to instigate any social change. In Salecl’s words, ‘the feeling of shame for being poor or not getting further up the ladder of economic success has replaced the fight against social injustice.’ This attitude can be traced back to Margaret Thatcher’s famous declaration in 1987 that, ‘there is no such thing as society. There are individual men and women, and there are families’.

Salecl’s argument no doubt provides at least some of the reason behind the widespread political disengagement observed in recent times. Concerned only with ourselves and our own choices, we become disengaged from politics and blind to the possibility of social change. Being unemployed or having little money results in feelings of inadequacy and a knee-jerk attack on the self rather than individuals challenging the inherent inequalities of the social context in which they feel they have failed.

Moreover, this apparent surplus of choice masks the fact that when it comes to how our societies are organised or how different forms of society may develop in the future, we are given little to no choice at all. In this way modern day capitalism wraps up its subjects in the illusion that they are masters of their own lives, burdens them with the sole responsibility for their success or failure, and all along denies them any real choice when it comes to social change.

In the context of the continuing global Occupy movement, The Tyranny of Choice adds an eloquent voice to the growing expression of dissatisfaction at the lack of any real democratic social choice and an increasing sense of the need for an alternative, or at least significantly altered, social system.

But regardless of whether one accepts Salecl’s book as a call-to-arms for serious engagement with the possibility of alternatives to post-industrial capitalism, or whether it simply functions to enable in its reader a critical distance from our obsession with a highly individualistic conception of choice and the anxieties that this obsession brings, The Tyranny of Choice represents a powerful and concise insight into the social and ideological context in which we lead our lives.