Mark Williams looks at how occupations relate to the massive rise in British wage inequality between the mid-1970s and mid-1990s, finding that growing inequality is largely between groups and is driven by a small handful of occupations.

That Britain has become hugely unequal over the last few decades is a well-known fact. How inequality has grown is less well known. My research examines how occupations relate to trends in wage inequality. I found that the single-most important factor accounting for growing inequality was that the wages of already high-paying occupations increased the most, ahead of the changing relative sizes of occupations, and inequality within occupations.

Looking at what occupations people do could provide a promising avenue for policy makers, the general public, and academic research in understanding how the massive rise in wage inequality unfolded – and continues to unfold.

The LSE economist, Henry Phelps Brown, once remarked that

“the pay of any two persons may differ for many reasons […] but the most conspicuous reason lies in differences of occupation. It is these that come first to mind as the source of systematic differences in pay” (1977:28).

Occupations as a unit of analysis since fell away in wage inequality research – so little is known about how occupations relate to the massive rise in British wage inequality between the mid-70s and mid-90s. This is what I investigated using a classification system of 366 occupational groups.

How can occupations shape trends in wage inequality? Occupations can affect inequality in three ways: 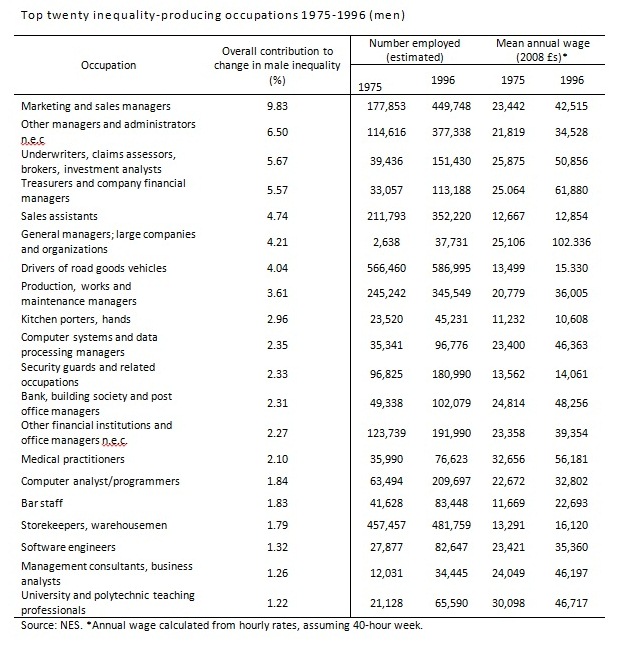 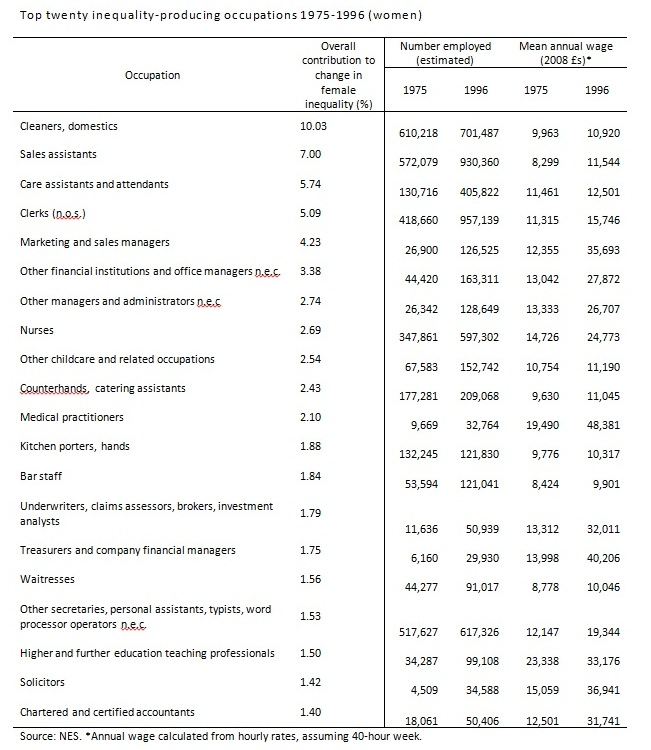 For men, most are managerial, including the top four – with marketing and sales managers being the most important – accounting for almost 10 per cent of the growth in wage inequality alone. Not all the inequality-producing occupations are highly-paid, however, such as goods vehicle drivers, kitchen porters and cleaners. This is especially true for women where cleaners are the most important occupation. So when we think about growing inequality we should also think about what is happening amongst low-paying service occupations as well as high-paying managerial occupations.

Implications
As Phelps Brown noted, occupation is the first reason to come to mind when considering pay inequalities. This is because occupations relate to skills and aspect of employment relations such as span of control or position within the organisational hierarchy.

Conclusion
My research adds to the wage inequality story by examining the role of detailed occupational categories – which have been oddly overlooked. My research has established that a between-group story is the more accurate one when groups are defined in terms of detailed occupations. My research points to the highly concentrated nature of growing wage inequality and to particular sections of the labour market that warrant further investigation. Moreover, the between-occupation story gives policy-makers something tangible to work with if tempering growing inequality is to be a policy goal.

Dr Mark Williams is a Fellow in the Employment Relations and Organisational Behaviour Group at the LSE. He recently completed his DPhil at Nuffield College, Oxford, where he also obtained an MSc in Sociology (Distinction). In addition to doctoral work he has conducted several other pieces of research including a government report on the role of workplace practices on mediating the quality of employment and an article on how country-level employment regimes shape the vulnerability of the low-skilled across Europe.

The two Coalition parties are sorely at odds over human rights