One interesting finding to emerge from the literature on the US Congress is that Republican legislators retire from office earlier in their careers than their Democratic counterparts. Not only has this pattern persisted for decades, but it has significant partisan consequences, with higher rates of retirement among Republicans hindering their ability to achieve and hold on to a majority in Congress.

In our forthcoming article in Political Studies, we test whether the phenomenon of partisan differences in retirements can be found in other legislatures. To do so, we analyse retirement patterns among MPs in Canada and Britain. While these two countries use similar electoral systems to the US (first-past-the-post), differences in the types of parties in each case allow us to parse out some of the ideological and personal motivations guiding retirement decisions that are more difficult to isolate in the two-party system of the US.

In studying the retirement patterns in these two countries, we test several explanations for why partisan differences in retirements might arise. One is that politicians holding a less favourable view of federal power and preferring that policymaking be devolved to lower levels of government will quit office earlier than politicians more favourably disposed to centralised government. A second is that, as a consequence of their preference for free markets, conservative politicians retire earlier than those on the left because the former are less interested in legislating economic intervention. A third is that, independent of their constitutional or economic ideologies, legislators holding less favourable views of government more generally will retire earlier than politicians who (like the Democrats in the US) have greater ambitions for office.

We found that, even after controlling for several alternative explanations potentially motivating retirement decisions, MPs from parties favouring devolution (or even independence)—the Bloc Québécois in Canada and the Scottish National Party in Britain—were significantly more likely to leave Parliament for other offices (primarily in the devolved legislatures) than other MPs. This suggests that, like some Republicans in the US, politicians favouring devolution of decisionmaking are more likely to retire early from legislatures.

Perhaps even more instructive were the retirement patterns of Conservative MPs in Britain. In keeping with the notion that conservative politicians distrusting of government intervention are more likely to retire early because they find the business of legislating less rewarding, MPs placing themselves to the ideological right had significantly higher probabilities of retiring than MPs placing themselves in the centre or on the left (see Figure 1). What is more, after controlling for MPs’ left-right ideological self-placements, Conservative MPs become significantly less likely to retire than Labour MPs. 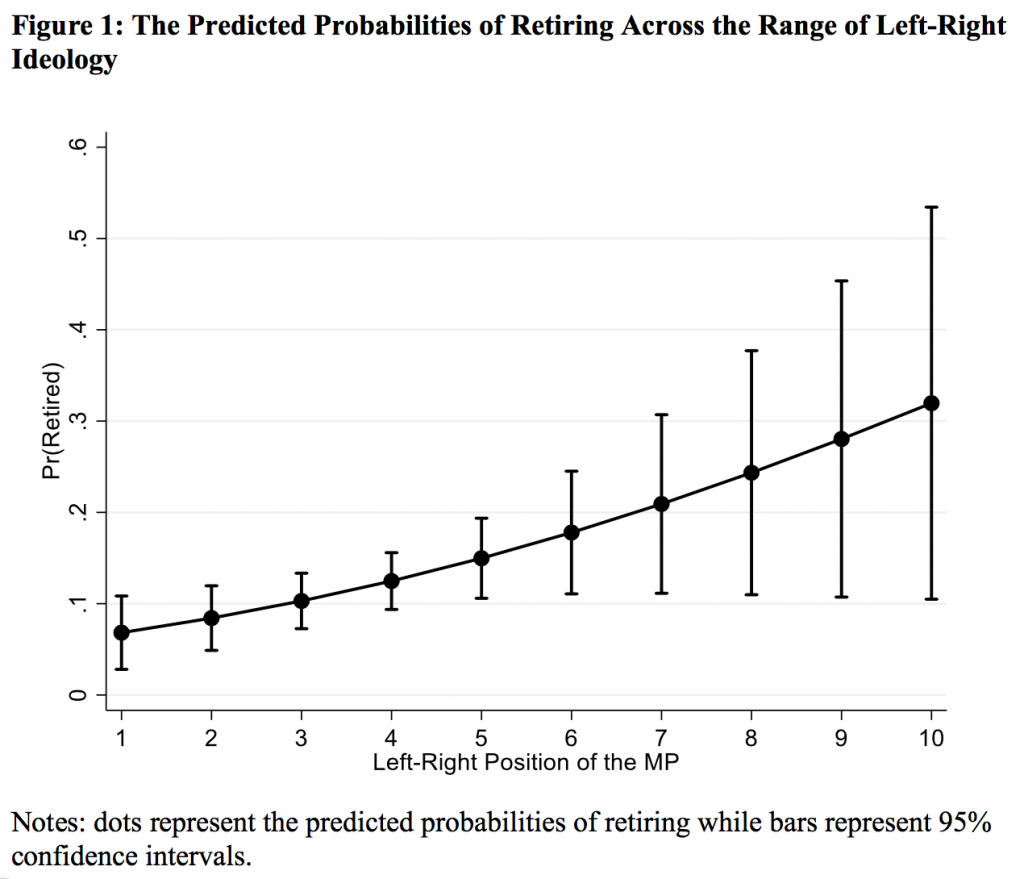 These findings support previous explanations for the appearance of partisan differences in retirements from the US Congress. Not only do conservative politicians seem to retire early because they find the work less rewarding, but politicians belonging to parties commonly as being the ‘natural’ party of government seem to be more likely to try to hold on to their seats.

Beyond the theoretical ramifications for the literature on legislative retirements noted above, our findings have important practical implications that raise normative questions. Namely, our results suggest that some parties face important electoral disadvantages. Because incumbency carries electoral benefits, parties comprised of politicians preferring devolved and/or less government may have a tougher time holding on to their seats than other parties. This has implications for the ability of some parties to participate in government and policymaking. Whether this electoral disadvantage is overcome by other benefits enjoyed by these parties is a question for future research.

Marvin Overby is Professor of Political Science at the University of Missouri.