Does the place we live in shape our national identity? John Denham presents data on how identities vary across six different types of community. He demonstrates that although in almost all areas the largest single identity is ‘equally English and British’, the gap between the ‘more English’ and the ‘more British’ varies across communities of different size.

For many of us, the place we live in is an important part of our identity. It may be a very local community – a village or a few streets in a town – but ‘our place’ can be as large as a global city like London. Surveys usually suggest that local identities are shared across communities that might otherwise be divided by ethnicity or faith.

Usually, we can’t know and will probably never even meet most of those who also identify with ‘our place’. Our ties are not just shaped by geography but by shared symbols (sports teams, for example), shared histories of war and of peace, iconic landscapes and buildings, and the imagery of political representation, amongst others. The idea of an ‘imagined community’ – a sense of fellowship with others we think share those same stories – underpins these identities. That’s as true of local identities as it is of national identity.

But does place also influence our national identity? At first sight, that seems unlikely: shared national stories surely embrace many different types of community and all the places within a nation. On the other hand, national identities, like local identities, comprise the stories that people tell about who they are, what they share with people like themselves, and how they see the world they live in.

There is a well-established cultural divide between the liberal, cosmopolitan, metropolitans, and the more socially conservative communities. How people see their national identity may reflect different views of the way the world is changing, and whether people feel that they are recognised and have agency in that world. If that’s the case, we would expect people’s sense of national identity to vary by the type of community.

At national level, the pattern of self-declared national identity in England is becoming quite well established. Asked to choose on a range between English only and British only, the largest group of people – around 40% – say they are equally English and British. To either side, most surveys show an emphasis on English identity: about 30% say are English only or more English than British, compared to the about 20% who say they are British only or more British than English. Given only one choice of identity, English wins out. In other surveys, English identity tends to be held more intensely than British identity (although a lot of people hold strongly to both).

This might be of only passing cultural interest if it wasn’t for a marked correlation that has emerged between national identity and political choices. Over 70% of ‘English not British’ voters supported Leave: a similar proportion of ‘British not English’ voters chose Remain. Labour support lags amongst English identifiers to the extent that may have cost the party power in the 2017 election.

This a fairly new development: in 2001, the last time Labour won the popular vote in England, there was little pattern to the party choice of voters with different national identities. Other surveys also show that national identity can be a strong predictor of how satisfied people are with the governance of England and the relationships between England and the rest of the union. If the balance of national identities does vary by type of community, it will have implications for how those areas might vote in future elections.

The distribution of the most intensely cosmopolitan and socially conservative constituencies has already been mapped across cities, coastal communities, and former industrial towns. 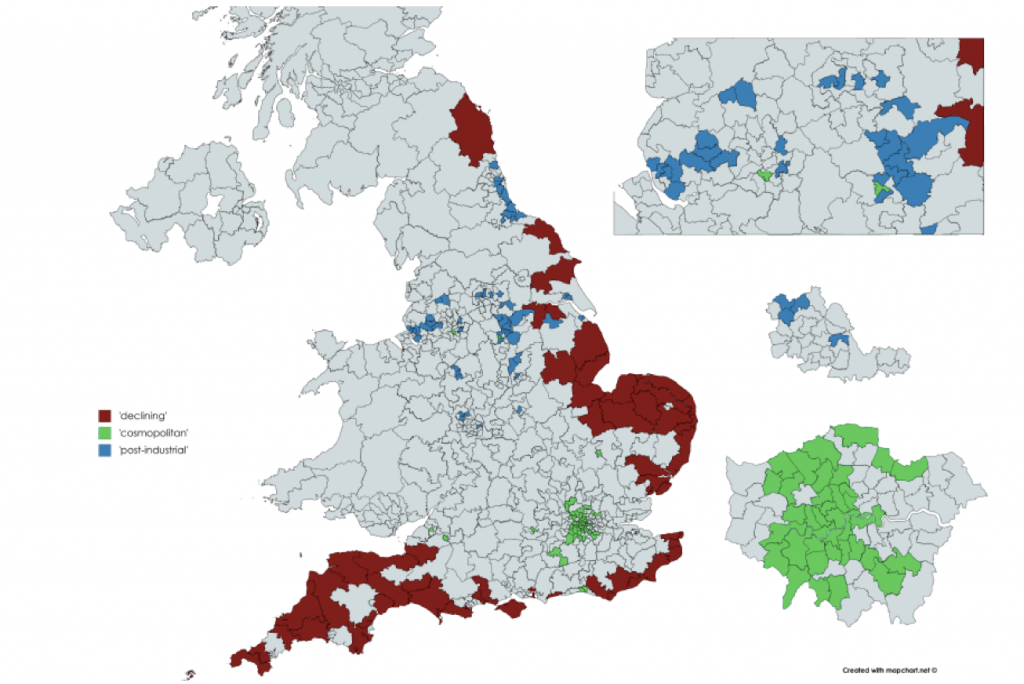 Map drawn by the author

We have now explored the patterns of identity from a different angle. Using the postcodes of 6000 English residents who participated in a YouGov survey[1], we can see how identities vary across six types of community:[2] core cities, large towns, medium-sized towns, small towns, ‘communities’, and ‘others’. For simplicity we looked at ‘more English’ (English only plus ‘more English than British’), and ‘more British’ (‘British only’ and ‘more British than English’).

In almost all areas, ‘equally English and British’ is the largest single identity or very close to it, in line with national surveys. But it is striking how the gap between the ‘more English’ and the ‘more British’ varies across communities of different size. The ‘more English’ lead is just 7% in the core cities, rising to 27% in villages. Indeed, the core cities stand out; even the large towns have 20% more emphasising their English over their British identity. 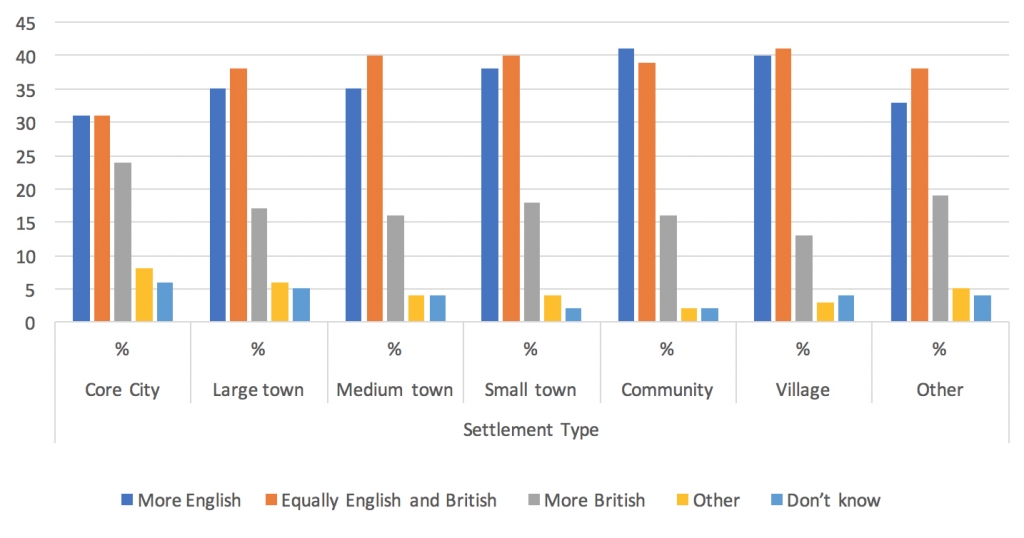 Many British identifiers will be surprised how few people in any areas identify as ‘more British’; the highest is 24% in the core cities, falling to just 13% in villages.

In a separate analysis of the same survey (Denham and Webber, forthcoming in Demos Quarterly) London, which is often thought to be much more British than the rest of England, is actually revealed as more polarised than other regions. A distinctive feature, shared by the core cities here, is that there are fewer ‘equally English and British’. This should be a healthy corrective warning to those who assume that our diverse metropolitan areas are forging a strong common identity. This may be true around the city identity but is not necessarily reflected in national identities.

The same survey provides the balance of identity by region. ‘Equally English and British’ is again the most common identity in all regions. In every region save London, ‘more English’ significantly outweighs ‘more British’. However, there is a broad trend for the emphasis on English identity to be more marked in the south: the southern and Midlands regions have the larger gaps between ‘more English’ and ‘more British’, and the northern regions the lowest differences. These variations do not necessarily indicate that regional identities predominate – the English standard regions do not map well onto historic regions – but they do suggest that the perceptions of Englishness and Britishness are influenced to some extent by regional perspectives.

Despite the correlation between national identities and political choices, we do not fully understand how they are linked. Voters did not usually describe voting ‘Leave’ as the English thing to do, or ‘Remain’ as the British option. It is therefore hard to draw firm political conclusions from this analysis. But, to the extent to which political parties want voters to identify with them, the evidence suggests that a sensitivity towards the strength of English identity outside the core cities would be sensible. Certainly, it would be best to avoid the mistake of the Remain campaign whose slogan in England, in contrast to the national campaigns in Wales and Scotland, was ‘Britain stronger in Europe’. On the other hand, the regional variations also suggest that sensitivity towards the layering of local, regional, and national identities will be important.

[1] The survey was conducted in December 2016. The survey showed a slightly higher emphasis on English identity than other surveys in 2017, but this is unlikely to affect the balance of identities across different types of constituency.

[2] The English core cities are Bristol, Birmingham, Leeds, Liverpool, Manchester, Newcastle, Nottingham and Sheffield and London. We have used the communities defined by the Centre for Towns.

Note: the author is grateful for comments from Will Jennings and Ian Warren on earlier drafts of this article, but remains responsible for the final version.