When David Cameron and Nick Clegg brokered the Conservative-Liberal Democrat coalition agreement in early May 2010 they made history, as the UK has not had a formal peacetime coalition government for more than 70 years. British politics has changed in many ways since the 1930s, and it is certainly true that some of the most dramatic developments have taken place in the realm of political communication. In 1931, Stanley Baldwin explained the terms of the coalition through Pathé, whereas Cameron and Clegg gave their now famous (or infamous, depending on perspective) Rose Garden press conference in the full glare of the 24 hour rolling news – and that’s not to mention the internet.

So at this junction, it seems like a good idea to ask how the media and coalition government as co-existing, and if any patterns are emerging.

The language of ‘coalition’ remains contested

What gives a particular government a mandate to rule? In the past, this seemed an easy question – gaining a majority of MPs in the House of Commons (of course, this answer does neglect the matter of the popular vote). However, the 2010 results, and post-election negotiations raised important issues – had David Cameron “won” the election, and earned the right to form a government? Could Gordon Brown stay as Prime Minister despite Labour “losing” the election?

This contestation over language has continued, most notably in Labour spin doctor Tom Baldwin’s call that the media to refer to a “Conservative-led government” rather than a “coalition”. This request has gained some traction, as Figure 1 shows, with the term cropping up a couple of times. Interestingly, although perhaps predictably a significant division across the political spectrum emerged here, with The Mirror, The Guardian and The Morning Star being the dominant users of the term. 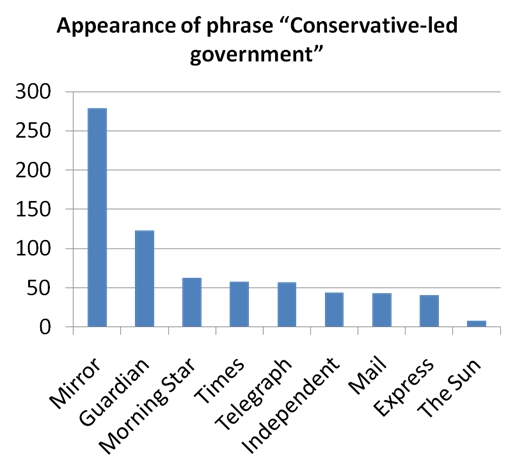 I was very struck by the BBC College of Journalism website page which offers guidance on reporting the coalition, touching on how to cover dissenting voices within parties and the idea of ‘division’. On the one hand, the very existence of this page points to something out of the ordinary which requires consideration. However, many of the videos and some of the guidance stress the need for journalists to concentrate on time-honoured values of the profession.

The Liberal Democrats are getting a lot of coverage

As the Figure 2 illustrates (constructed by searching five national newspapers for articles that reference his name more than three times), Nick Clegg is mentioned frequently in the media. I do not have comparative data, but I suspect that his name appears more than previous Liberal Democrat leaders in the first year of any new parliament. The bad news for Clegg though is that he gets far more coverage when things go wrong – such as the start of protests over cuts in October 2010, or following the AV defeat and local election losses in May 2011. 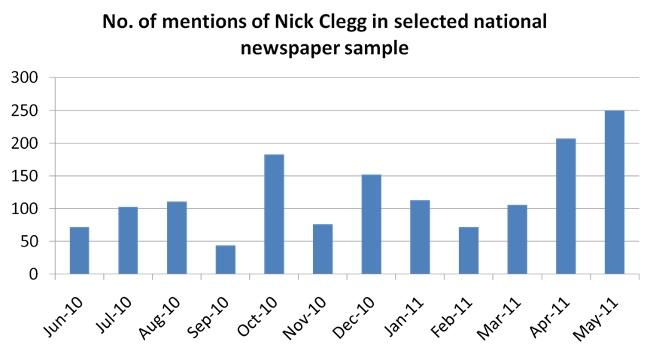 That said, I would be cautious about assuming all the coverage of the Liberal Democrats is bad news. Using the same search criteria, I pulled up newspaper articles for the week before the conference and put them in a tag cloud (Figure 3). Of course, without a proper comparison, we have no way of knowing if this is a typical week, but the words that I had expected to see – maybe “unpopular”, “disliked” etc – were not there. Instead, there is a picture painted of Clegg being at the heart of government and being written about as important to the various policy debates that are on-going. 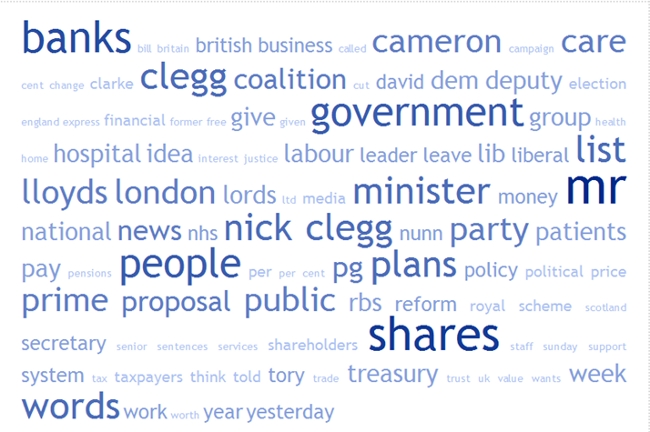 Following the election campaign, journalists regularly asked questions on policy items that were present in the party manifestoes but were then dropped from the coalition’s platform. There is a line of argument which suggests that such questioning is the product of a failure to understand coalition politics. However, it could be argued that the “but it was in your manifesto” question could be re-interpreted to make it relevant during a coalition administration.

Ultimately, the actual text of a manifesto is not what is important when the public make their judgements on politicians. What is rather more important is how politicians seek to communicate their political positions through sound bites and images. Essentially, we are dealing with mediatized manifestoes. To take an obvious example, Liberal Democrats may claim that they went into negotiations with the Tories aiming to achieve their four key manifesto goals (namely fair taxes; a fair chance for every child; a fair future, creating jobs by making Britain greener; and fair deal for you from politicians). By implication, issues to do with higher education funding are excluded from being a top priority in the discussions that led to the formation of the government. However, such an argument is tenuous, given the way in which the Liberal Democrats’ positions were presented by the media (with, it should be noted, the complicity of the party). I suspect far more of the public would have associated the Liberal Democrats with the pledge to end tuition fees than with any of their top four manifesto pledges, simply because of how the message was disseminated. This must be near the root of the party’s current problems.

A new form of questionning

What does all this mean in practical terms? In part, the style of questioning journalists adopt needs to change. Instead of saying that something was “in the manifesto” when policies are cut adrift, they should be asking politicians before an election which policies are non-negotiable. Afterwards, they should hold them accountable not just for the content of their manifesto, but also for the images and tone used to convey it. If – as I would suggest is likely – coalitions are going to become a more prominent part of our political landscape, then this is a form of questioning we will have to think about.

State of the Race 16 March