Director of the Centre for Economic Performance at the London School of Economics,  John Van Reenen, gives his reaction to the Autumn Statement. Whilst the U-turn on tax credits might appear to be the big story in the short term, the longer term plans continue to represent a shrinking of the state on a spectacular scale.

Credit where tax credit’s due

The sexy centrefold of the Autumn Statement was a naked reversal of Chancellor George Osborne’s attempt to cut in-work tax credits. He was lucky to receive fiscal cover from the Office for Budget Responsibility (OBR) who now forecast that the public finances will be £27bn better in 2002/21 than previously thought due to higher expected tax receipts. This turns out to be mainly due to revisions in the way the OBR forecasts VAT receipts and National Insurance Contributions rather than any improvements in underlying economic growth (see Figure 1). 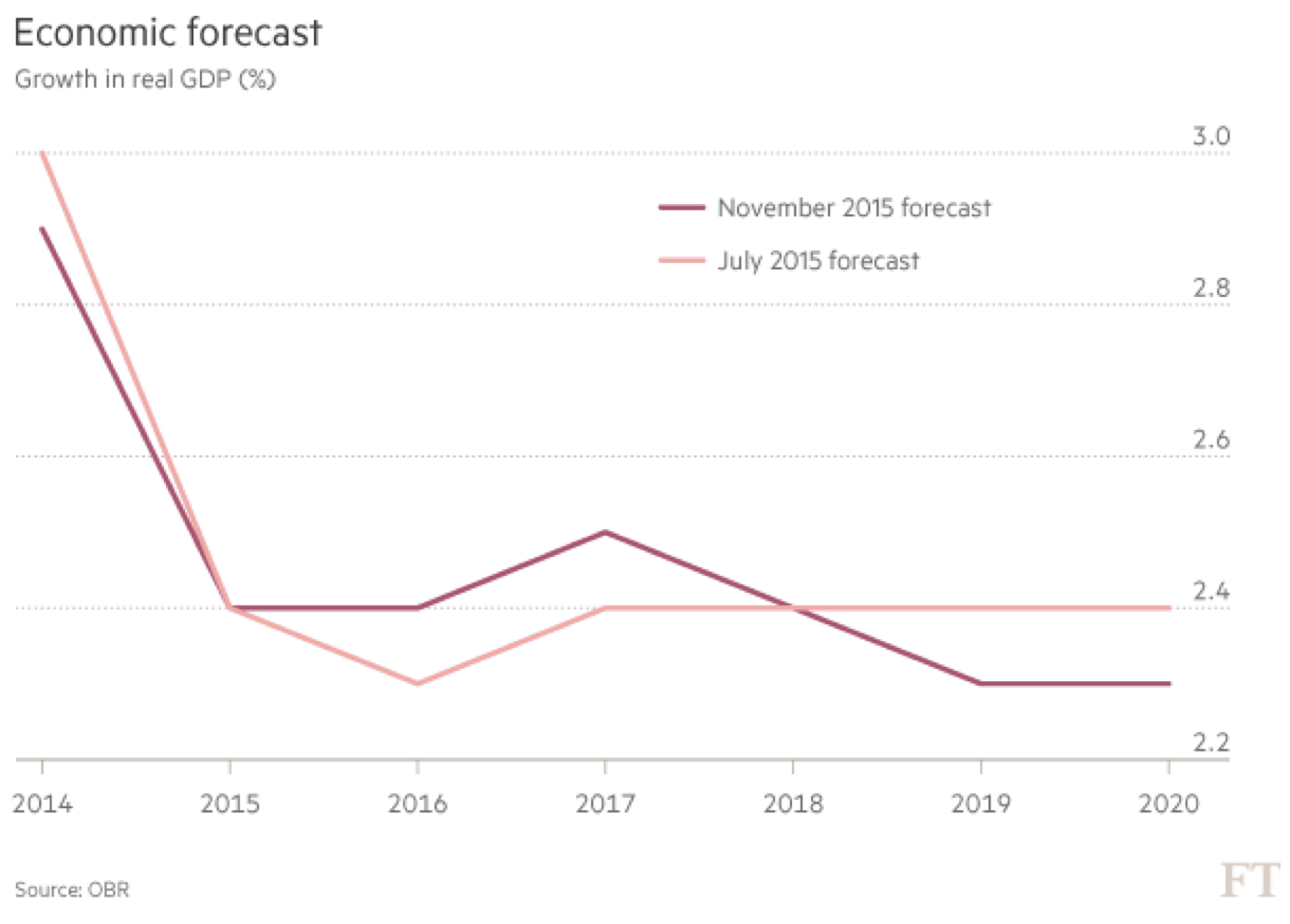 But what really killed the tax credit changes was the rebellion in the House of Lords. This brought home the fact that the move to take away money from the poorest working families was both economically and politically toxic. Even under the heroically incorrect assumption that an enormous hike in the minimum wage would have little effect on jobs, the new Living Wage would not go anywhere near compensating the losers. What’s more, the reduction of cash top-ups for employment would erode the incentives to move off welfare into work.

Given the absence of evidence that tax credits depress wages, can we thankfully wave ‘goodbye and good riddance’ to this sorry episode? Maybe, but remember that tax credits are due to be replaced by Universal Credit in about three years. It is unclear what this will mean in practice – it’s entirely possible that if funding remains low, the same issue will rear its ugly head further down the road.

The Autumn Statement outlines where public spending changes are going to take place over the next four years. There are going to be swingeing cuts in some departments. For example, real-price spending in Transport is down 37%, Business down by 17%, Energy down by 22% and Culture down by 22%. This comes on top of big cuts to these ministries in the last Parliament; the Ministry of Justice, for example, has already had its day-to-day budget cut by a third since 2010/11.

Two big decisions set by the pre-election budget frame these changes. First, the government pledged – and has now legislated – to have a surplus on total public expenditure by 2019/20. This pledges makes little sense. There is no good economic rationale to insist on a total budget surplus. The old fiscal mandate was more sensible: balancing the current structural budget over five years. The new Charter for Budget Responsibility law treats borrowing to invest in infrastructure in the same way as borrowing to raise the Prime Minister’s salary. Figure 1 below shows that little has changed in the overall fiscal stance since the July Budget – the Chancellor is still aiming for a surplus of around £10 billion by 2019/20. 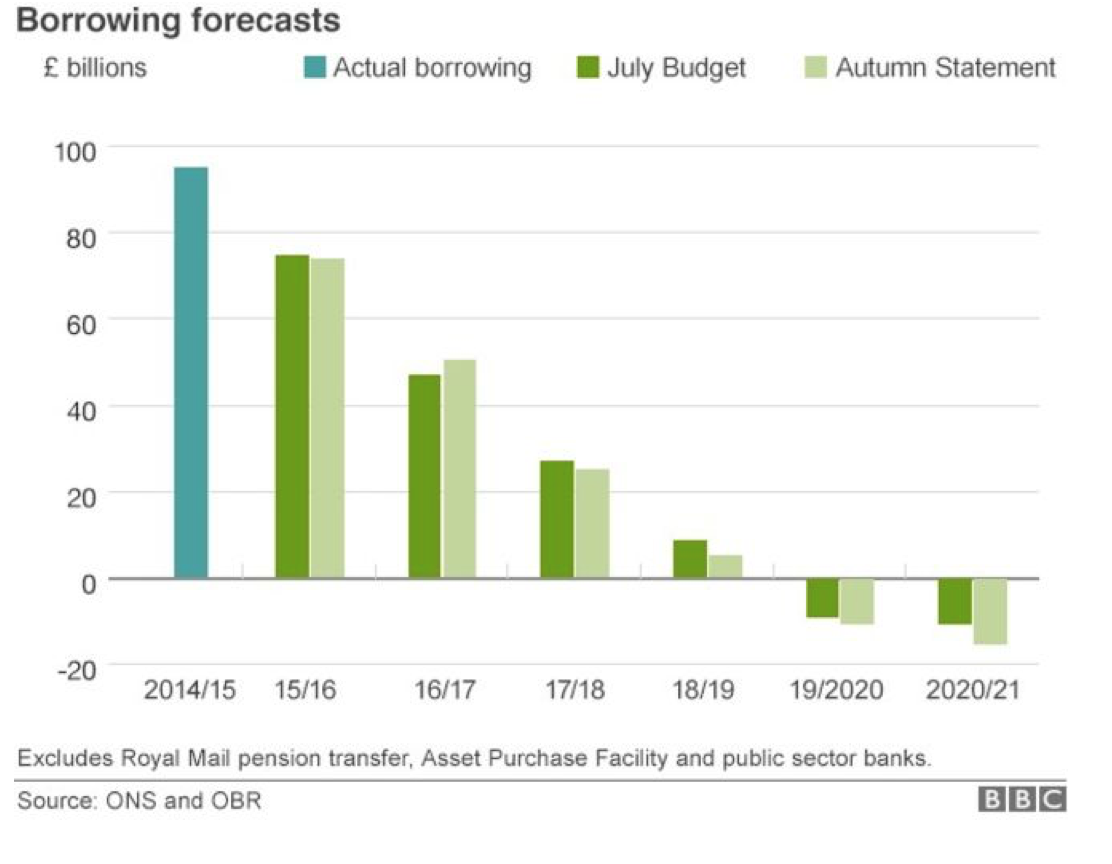 The second pledge was that the deficit would be bridged by spending cuts rather than tax rises. This is over-hyped though. Mr. Osborne has quietly introduced a large number of ‘stealth taxes’. The biggest is the apprenticeship levy (a whopping £3bn a year), followed by stamp duty on buy-to-let homes (about a billion a year), a social care levy that could bring in another £2 billion and an end to the freeze on fuel duty levy (£2.3 billion). Altogether the OBR points out that this amounts to a net tax increase of £6.5bn a year by 2020/21. Increases of similar magnitudes were announced in the July Budget.

These tax increases coupled with the OBR’s more optimistic revenue projections has given the Chancellor greater room to slow down the planned public spending cuts. Figure 3 shows how the public service cuts over the next four years have mellowed from the March to July Budgets and now to the Autumn Statement. 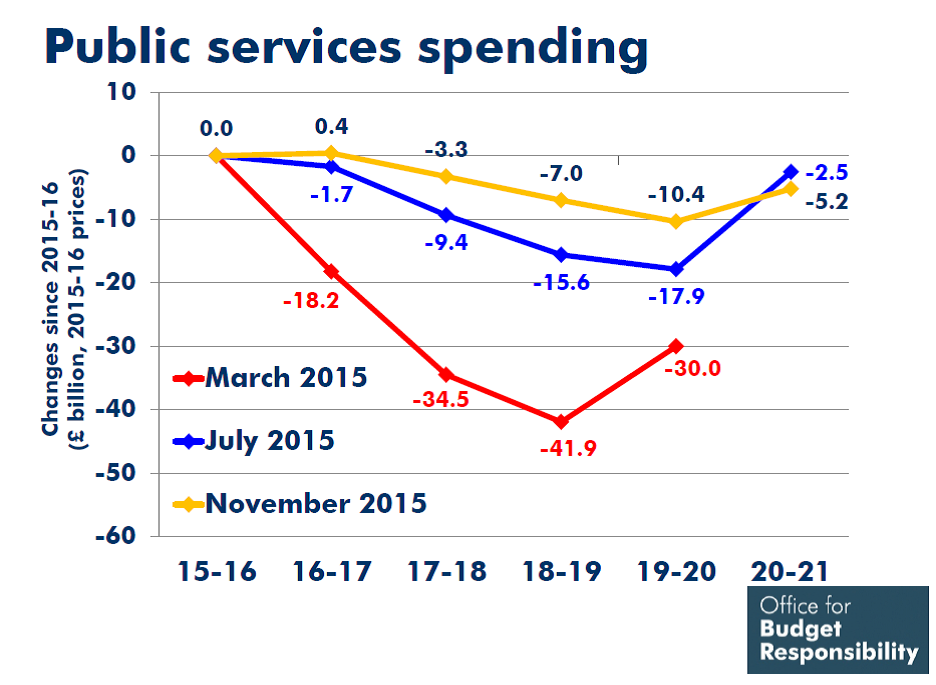 Although these pledges set the parameters for the overall fiscal envelope, together they only imply that public spending shrinks as fraction of national income – real spending will still rise slightly. Unfortunately, welfare spending is pencilled in to rise considerably, driven by the government’s largesse to the Tory bloc vote commonly known as pensioners. Even factoring this in means only something like a 3% real cut in departmental spending over four years.

It is further choices that drive the scale of the cuts to specific departments. First, large parts of government expenditure are ‘protected’ in real terms – the NHS, schools, overseas aid and now Police and Defence. Second, since public investment is due to increase by 11%, ‘day-to-day’ spending must pick up the biggest falls. These choices explain why some departments are looking at such eye-watering cuts.

The government won the May elections on the back of the economy. They blamed the worst recovery in a century on Labour’s fiscal incontinence in the 2000s, despite the fact that the financial crisis was a global shock that had nothing to do with the small fiscal deficits pre-crisis. Moreover, the Chancellor argued that his unbending economic plan was working despite the fact that the deficit was not eliminated as promised in 2010, but remained at 5% of national income. And far from being inflexible, fiscal consolidation slackened considerably after the damaging consequences of the acceleration of austerity in the first half of the Parliament.

The reversal of some of the public investment cuts and the recent announcement of an Infrastructure Commission – as recommended by the LSE Growth Commission – are welcome developments. This kind of pragmatism is a good sign. I sincerely hope – and expect – that other unwise commitments are also jettisoned as economic reality intervenes over the next four years.

Please note: The article represents the views of the author and not those  of British Politics and Policy, nor the LSE. Please read our comments policy before posting.

Posted In: Economy and Society | Uncategorized

Growth, Graphs and George: Top 5 blogs you might have missed this week

Immigration, Inconsistencies and Privatisation: Top 5 blogs you might have missed this week

Flashback to the 1980’s or a way forward for UK politics? Top 5 blogs you might have missed this week