The issue of Britain’s relationship with Europe was a significant factor in the downfall of both Margaret Thatcher and John Major. Could the same come to be true of David Cameron? Pete Dorey reflects on the Conservatives and Europe in 2012 and what the future might hold in 2013.

In one particular sphere of policy, David Cameron must recently have experienced a disconcerting sense of déjà vu, for he ended 2012 in a rather similar manner to how he ended 2011; facing a sizeable backbench rebellion over his stance towards the European Union. Having seemingly neutralised ‘the European Question’ when he was leader of the [Conservative] Opposition, the issue of Britain’s relationship with the EU acquired increasing toxicity for Cameron during 2012, as Conservative Eurosceptism swiftly degenerated into consumptive Europhobia. This seemed both to reflect and reinforce a rapidly increasing hostility towards the EU among the British electorate, as evinced by sundry opinion polls, and the advances attained by the UK Independence Party (UKIP) in the by-elections held in 2012.

As 2012 progressed, the problems of Party management which Cameron experienced over the EU began to summon forth memories of John Major’s ill-fated premiership, when refusal to accede to Eurosceptic demands for a tougher stance were condemned as a ‘sell-out’ to Brussels, whilst ceding ground to the Euro-sceptics was interpreted by them as legitimation of their stance, and thus prompted yet more demands for retreating from the EU. As such, Britain’s increasingly fraught relations with the EU provided Cameron with some of the toughest challenges of his leadership and Party management skills since May 2010.

Emboldened by the embarrassment they caused Cameron in November 2011, and cognisant that there were few feasible sanctions he could impose by way of retribution, Conservative Europhobes were afforded further opportunities to challenge Cameron’s own pragmatic Euro-scepticism, especially as they were convinced that they reflected, or were leading, public opinion.

First, in a general sense, some Conservatives have readily blamed the crisis in the Eurozone for the failure of the Coalition Government’s austerity measures to yield quicker or stronger economic recovery. Rather than acknowledge the impact of expenditure cuts, job losses and pay freezes in pushing the British economy to the brink of a double-dip recession, many Conservatives have sought somehow to blame the Eurozone crisis for the flat-lining of the British economy, the implication being that Britain’s extensive exports to Europe are being affected by the crisis afflicting many other member states, and thus choking-off a nascent recovery in Britain. Thus did Chancellor George Osborne claim, in June 2012, that: ‘Our recovery – already facing powerful headwinds from high oil prices and the debt burden left behind by the boom years – is being killed off by the crisis on our doorstep.’ This, of course, rather assumed that there had been an economic recovery to be killed off in the first place.

Second, the summer of 2012 also heralded a letter to David Cameron, signed by 100 Conservative MPs, demanding legislation to guarantee, after the next general election (assuming that the Conservatives won, of course), a referendum ‘on the nature of our relationship with the European Union’, although this did not specifically call for outright withdrawal. However, in October, Douglas Carswell presented a Private Members’ Bill which did demand Britain’s withdrawal from the EU, this to be effected by repeal of the 1972 European Communities Act (aka the Act of Accession), although like most Private Members’ Bills, Carswell’s Bill did not reach the statute book. However, his avowed purpose was to promote the case for British withdrawal from the EU, and thus apply further pressure on Cameron to pledge a straightforward ‘in/out’ referendum.

Third, the end of October entailed a defeat for the Coalition Government (or, rather, David Cameron) over a parliamentary vote on the EU Budget. The Cabinet had urged Parliament to endorse its demand that the EU Budget should be frozen at its current level for the foreseeable future, whereas the EU Commission was proposing a 5% increase from next year until 2020. However, hard-line Conservative Euro-sceptics tabled an amendment demanding actual cuts in the EU Budget; this was endorsed by 307 votes to 294, with 53 Conservative MPs supported it in defiance of a three-line whip, along with the Labour Opposition – the latter clearly unable to resist mischief-making.

Although not binding on Cameron, his subsequent failure to achieve real cuts in the EU Budget (albeit an unrealistic goal given the stance of most other member states and their leaders) merely increased the contempt of hard-line Conservative Euro-sceptics both towards Cameron, and his Liberal Democrat Coalition partners – the latter believed (erroneously) to enjoy far more influence in the Cabinet than their electoral support and parliamentary strength warrants. Indeed, a constant low-level complaint of some Conservative Europhobes is that Cameron has been in thrall to the pro-European Liberal Democrats – the Clegg tail wagging the Cameron dog.

Fourth, sundry opinion polls during 2012 consistently revealed that a majority of British people would vote for withdrawal from the EU if given the opportunity in a referendum; barely a third would vote for Britain to remain in the EU. Of course, how people say they would vote in a hypothetical poll is not a reliable guide to how they would actually vote if such a referendum was held, especially as the arguments in favour of continued membership might finally be heard more clearly, and people’s minds were thus a little more focused on the serious implications of exiting Europe (a point well made by Andrew Rawnsley in The Observer on 25 November 2012; ‘Those who want Britain out of Europe are raising a glass to themselves far too soon’).

Fifth, in the context of rapidly increasing Euro-scepticism among the British public, UKIP has enjoyed a steady increase in support, both in several opinion polls, and in various by-elections held during 2012. In so doing, further pressure has been placed on Cameron by many deeply Eurosceptic MPs, not only because UKIP’s increased electoral support is viewed as a barometer of deepening public hostility towards the EU and a consequent desire to quit, but also because many Conservative MPs now fear that UKIP might deprive the Conservatives of several marginal seats in the next general election. It is not that UKIP are thought likely to win any seats, but where the Conservatives are defending narrow ‘majorities’, it might only require a few hundred disgruntled erstwhile Conservatives to switch to UKIP to enable Labour or the Liberal Democrats to win such constituencies – as was the case in 21 seats in the 2010 election.

In response to UKIP’s steadily growing support, a Conservative vice-chairman, Michael Fabricant, urged Cameron to craft an electoral pact, whereby UKIP would agree not to contest Conservative marginals if Cameron gave a cast iron promise of an in/out referendum on Britain’s continued membership of the EU. Cameron, however, was totally dismissive of such a proposition – as was the leader of UKIP, Nigel Farage.

Sixth, UKIP began posing challenges to David Cameron on non-EU issues. For example, in December 2012, UKIP declared its intention to exploit Conservative divisions over the Coalition Government’s plans to legislate to permit gay marriages. Although UKIP do not have any MPs, and so cannot oppose the proposed Bill in Parliament, Farage has vowed to appeal to grass-roots Conservative Party members and erstwhile Tory voters who, he believes, will turn away from the Conservatives over this issue. Farage has thus declared UKIP’s intention to make this a key issue in the 2014 European Parliament elections, and especially in rural areas, where attitudes on moral and sexual issues are apparently more conservative or traditional (i.e., pre-1960s).

This threat provides an example of how UKIP intend to expand and intensify their campaign against David Cameron’s Conservative Party between now and the 2015 general election – assuming the Coalition lasts the full five-year term. If the economy fails to show clear signs of recovery in 2013, and this leads to a continued decline in the Conservatives’ opinion poll ratings, then UKIP might well attract further support, especially as disillusioned Conservatives are no longer likely to switch to the Liberal Democrats (as they might have done before 2010).

Cameron is thus caught between a rock and a hard place. If UKIP’s 2012 support is sustained, or even increases, then he will face mounting pressure from a growing number of frustrated or panic-stricken Conservative MPs to adopt a more hard-line stance over the EU, preferably by pledging an ‘in/out’ referendum. Yet if Cameron did respond in such a manner, then relations with the Liberal Democrats would probably be strained even further, possibly placing the future of the Coalition itself in serious jeopardy.

Such a response might also encourage the Party’s few remaining prominent pro-Europeans (such as Michael Heseltine and Kenneth Clarke) to speak out, having generally kept quiet over the EU since 2010, in order to maintain a semblance of Party unity. If they perceive Cameron to be caving-in to hard-line Euro-sceptics, then pro-European Conservatives might feel entitled to abandon their de factovow of silence.

The issue of Britain’s relationship with Europe was a major factor in the downfall of Margaret Thatcher in 1990, and then her successor, John Major, in 1997, neither of whom had to contend with the growing threat posed by UKIP in Tory marginals. It is thus not inconceivable that the issue of the EU could well fatally undermine David Cameron’s premiership too during the next couple of years. If so, this would be recent Conservative history repeating itself, not as tragedy, but as farce. 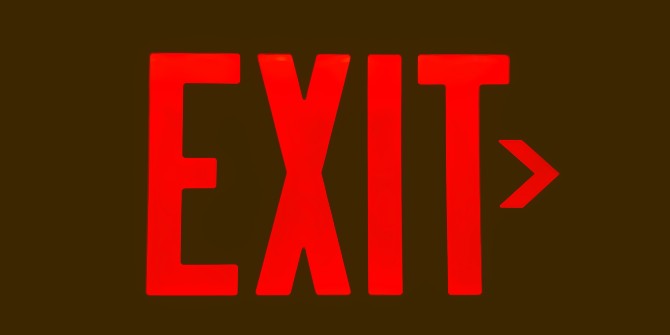