Across the eurozone, central bankers and politicians advocate reducing taxes in order to reduce government deficits. But are lower taxes the key to deficit reduction? Craig J. Willy looks at evidence from across the OECD and finds that higher taxes tend to be correlated with lower levels of public debt, and greater fiscal sustainability. In addition, greater levels of income equality in countries are also correlated with fiscal sustainability.

This was originally posted on the LSE Europp blog.

In the face of weak economic growth and demographic aging, developed countries across the world are debating how to achieve immediate and long-term budgetary sustainability. This article does not look at the current, often acrimonious and sometimes amusing, debate on the short-term impact on growth of fiscal consolidation. Instead, it looks at the overall debt levels that developed countries have built up over the years and their correlation with tax levels.

Early into his term as President of the European Central Bank, Mario Draghi aroused controversy when he told the Wall Street Journal that “[t]he European social model has already gone.”Less noted was the fact he had expressed a desire to see tax rates reduced in Europe, apparently and paradoxically as part of the effort to reduce government deficits:

The bad consolidation is actually the easier one to get, because one could produce good numbers by raising taxes and cutting capital expenditure, which is much easier to do than cutting current expenditure. That’s the easy way in a sense, but it’s not a good way. It depresses potential growth. […]

The zeal of EU officials for deficit reduction is well-known and is well within their role as the guardians of the European Treaties (which theoretically limit deficits to 3% of GDP). More surprising is seeing Europe’s most powerful official arguing for the same budgetary theories as the “radical” Tea Party wing of the U.S. Republican Party: the best way to reduce budget deficits is to cut taxes.

This means, according to Draghi, that the entire budgetary adjustment should be achieved through reductions in public spending. In the European context, with already low defense spending, this implies very significant cuts to pensions, unemployment benefits, healthcare, education and/or other public services and welfare spending. A major difference between Draghi and the Tea Party is context as in Europe the tax burden is far higher than in North America. But we can still ask the question: What is the relationship between high taxes and fiscal sustainability?

This article uses public data to look at the correlations between tax levels and public debt-to-GDP. It therefore takes partial account of both the possibility that high taxes might reduce revenue (leading to higher debt) and that they might reduce growth (leading to lower GDP).

I have limited my analysis to the “traditional” developed countries of Western Europe, North America, and Oceania, and Japan. These countries have had to try to limit public debt in the difficult context of low growth of the past thirty years. It is far easier to limit debt-to-GDP growth for countries in the “catch-up” phase of rapid growth and development. As such I have not used data from “emerging” countries. The total tax revenue data for countries that are members of the Organisation for Economic Cooperation and Development that I have used is available here.

The smaller euro-crisis countries tend to have lower tax-regimes (Ireland, Greece, Portugal) while the more sustainable “core” or near-core countries tend to have high-tax regimes (Belgium, France, Finland, Austria). The most-heavily taxed countries, the Nordics, also tend to be most fiscally sustainable and economically dynamic. There is considerable variation however and clearly many other factors are at work: Spain, the United Kingdom, Germany and the Netherlands all have middling taxation, but their economic and fiscal performances vary wildly.

If we look at the total tax burden and general gross public debt, we observe a “funnel-shaped” correlation between higher taxes and lower public debt. Low-tax countries include both those with the highest and the lowest public debt. In contrast, high-tax countries both tend to have lower debt and their performance tends to be more consistent. 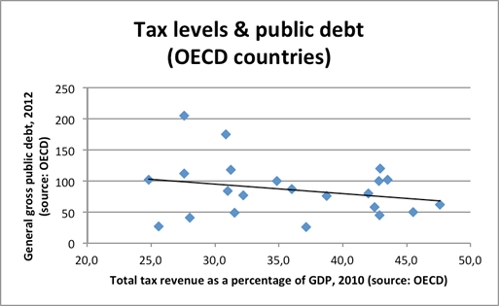 Public debt is an insufficient measure of fiscal sustainability as one also needs to include current deficits(very significant in the U.S., the UK, Japan and some eurozone countries) and weak banking sectorswhich may require eventual bailouts at taxpayer expense (the case of many eurozone countries).

This requires aggregation of a number of factors, one attempt at which is the Sustainable Governance Indicators’ budgetary policy index. It aggregates scores in terms of budgetary policy, soundness of banks, debt-to-GDP and refinancing costs. Countries are scored from least to most sustainable (Greece = 1, U.S./Japan = 3, Sweden/Switzerland 10, etc). We again find a correlation, this time between higher taxes and fiscal sustainability. 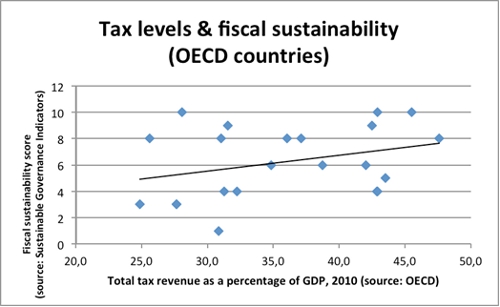 Another attempt at measuring fiscal sustainability in aggregate has been done by the OECD. It calculated the scale of primary deficit reduction necessary today, as a percentage of GDP, to bring public debt down to 50% of GDP by 2050.

There are some perhaps surprising results: given their substantial existing consolidation efforts and small-to-non-existent primary deficits, many crisis eurozone countries need in principle to implement only minimal further deficit reduction. In contrast, Japan, the U.S. and the UK need to engage in significant consolidation due to high public debt and significant current deficits. Charted with the overall tax revenue we obtain: 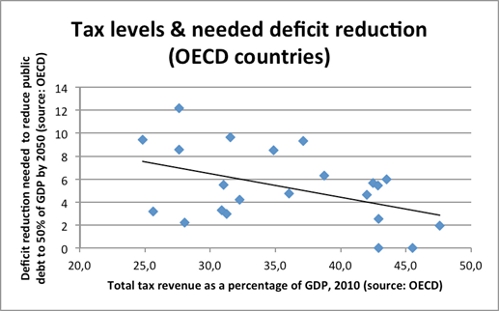 Correlation is not causation. Apparent correlation of tax levels with fiscal sustainability may be a proxy for other indicators. A final insight can be obtained by correlating “fiscal indiscipline,” as calculated by the OECD, and income inequality:

We observe an even stronger correlation: countries with higher income inequality are far more likely to have unsustainable budgetary policies. 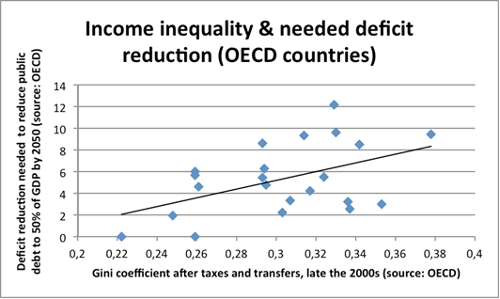 There are a number of plausible reasons for these correlations between high taxes/income equality and fiscal sustainability. First, countries who adopt low taxes often do so with a view towards “tax haven” status or developing financial services. This strategy appears to work in the short-term, but often makes the country particularly prone to financial speculation and to massive increases in debt-to-GDP when bubbles pop (Ireland, Britain, Cyprus…). High-tax countries, by adding friction to capital’s activity and greater focus on “real” economic activities, may be less prone to such dramatic boom-and-bust cycles. In addition, in more equal societies political leaders may be under less pressure to artificially sustain economic activity through deficit spending as the social costs of unemployment are lower (the jobless are less likely to be poor, the poor likely to be less vulnerable).

Whatever the causes, what is clear is that the idea promoted by EU central bankers and U.S. Tea Partiers – that taxes must be lowered as a part of reducing government deficits – contradicts the economic data and national experiences we have. The correlation is exactly the opposite: higher taxes tend to coincide with low deficits and low debt. In addition, many high-tax countries have among the best general economic performances, while many low-tax countries are among the worst.

If a low-growth developed world is here to stay, and demographic and environmental factors suggest this is likely the case, political leaders would be well-advised to take the potential benefits of adequate revenue and income equality into account if they want to achieve budgetary sustainability for the long-term.

Craig Willy is a freelance EU affairs writer. His work includes political research and analysis (notably for EU news site EurActiv and the Bertelsmann Foundation), and editoprial advice and translation. His bilingual blog on EU politics is available on his website.

State of the Race for 30 April

The London Olympics – making a ‘piece of city’