Recessions typically lead to an increase in youth unemployment rates, leaving young people to face more difficulties in finding jobs. Concerns about the long-term impact on young people arise when youth unemployment rates are very high. One prominent example is the current policy debate about the Great Recession’s ‘lost generation’ – single, jobless and often still living with their parents. We know, for example, that unemployment at young ages can have persistent negative effects on future wages and career progression.

Our research shows that recessions have a more disturbing and substantial impact in that they initiate and form a higher proportion of criminal careers: young people who leave school during recessions are significantly more likely to become involved in crime than those who leave school while labour markets are more buoyant.

So why is it that young people who join the labour market during recessions are more likely to engage in crime? Those who leave school during a recession, when youth unemployment rates are particularly high, struggle to find a job and do not yet have financial insurance. Hence, following the notion from Gary Becker’s seminal work on criminal choices, low expectations on returns to legitimate activity (in terms of both job quality and wages) may lead to initial involvement in crime and subsequently to a first encounter with the criminal justice system.

Knock-on effects can then lead to criminal careers for the young. On the one hand, those who initially get involved in criminal activity learn the ‘criminal knowhow’. On the other hand, those who have criminal records early on in their career may reduce their job opportunities and expected returns in the legitimate labour market.

There is a substantial body of criminological evidence that illustrates the importance of young people’s experiences for our understanding of crime. In particular, research has established a strong age­crime pattern with crime rates typically peaking during the late teenage years. Yet crime is not only a feature of the teenage years – crime rates decrease with age but do not disappear subsequently. This suggests that there is an initial effect but criminal activity is somewhat persistent over the lifecycle.

Can that persistence be explained by the long-term impact of recessions? A typical recession leads to an unemployment rate that is five percentage points higher than normal. What is the long-term impact of leaving school in such economic conditions? Our empirical analysis of the link between crime and unemployment at labour market entry is based on a variety of US and UK cohort and individual-level data sources.

We analyse cohort-level data for both countries to estimate the average effect of initial labour market conditions on the criminal activity of cohorts that enter the labour market at different points in time, taking account of differences in cohort composition.

For the UK, we use data on conviction rates from the Offenders Index Database and the Police National Computer. We find that the average conviction rate for a cohort entering the labour market during a recession is 4% higher than for an otherwise similar cohort.

How should we understand these results? Our results refer to the effect on the average cohort arrest and conviction rates. Presumably, a large share of individuals in a cohort never get involved in crime, independent of initial labour market conditions. A much smaller share is actually at the margin of becoming criminal, and in that respect, these are the individuals affected by economic conditions when first entering the labour market. The average effect is a combination of the effects for both groups, which implies that the effect on young people at the threshold of criminal activity may be even more substantial than the average effect suggests.

Studying individual-level data adds to that picture. Using data from the US Decennial Census and the American Community Survey, we find that entering the labour market during a recession increases the probability of being incarcerated at some point over the next two decades by 5.5% in the United States.

Using data on self-reported arrests from the British Crime Survey and taking account of an extensive set of individual characteristics such as family background, education and geographical location, we find that entering the labour market during a recession is associated with a 5.7% increase in the probability of ever being arrested in life.

In both cases, the effects are even stronger for young people who leave education early and are less qualified for the labour market. This confirms the notion of the average effect being a conservative estimate.

What about the persistence of the effect of recessions and the forming of criminal careers? Figures 1 and 2 show the estimated effects by year since labour market entry for the United States and the UK. Albeit slightly decreasing, the effect of entering the labour market during a recession is indeed persistent, with the initial unemployment effect pushing some young people towards a criminal career, implying sizeable and long-lasting effects. 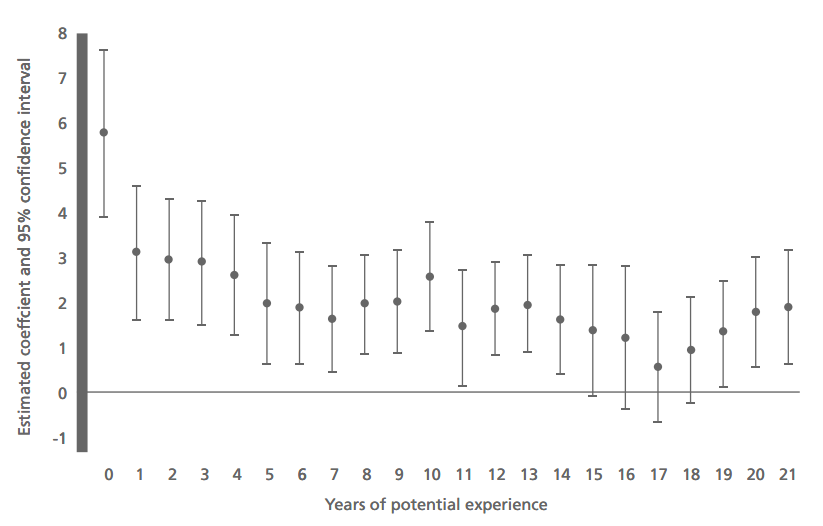 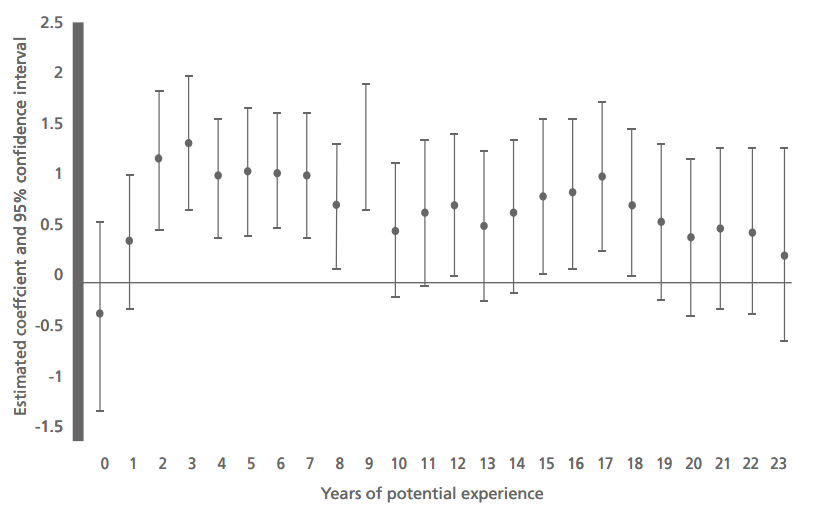 Our results have important implications that contribute to the current policy debate about the long­term impact of recessions on young people. We demonstrate a disconcerting long-run effect of economic downturns. Recessions not only lead to short-term negative outcomes in the labour market but can produce career criminals. This suggests the need for an increased focus on policies that help young people get a step on the employment ladder and keep them out of trouble.

We find robust evidence of an initially strong and eventually long-lasting detrimental effect of entering the labour market during a recession for individuals at the threshold of criminal activity. These effects are economically substantial and potentially more disturbing than short-run effects.

This article was originally published in Centrepiece, the CEP’s magazine, and summarises ‘Crime Scars: Recessions and the Making of Career Criminals’ by Brian Bell, Anna Bindler and Stephen Machin, CEP Discussion Paper No. 1284.

Brian Bell of the University of Oxford is a research associate in CEP’s productivity and innovation programme.

Anna Bindler is a research assistant in CEP’s education and skills programme.