On Wednesday, David Cameron delivered his long awaited speech on the UK’s relationship with Europe, guaranteeing a referendum on the country’s EU membership should his party win the next election. Simon Hix gives a critical reading of the speech, noting that the content was far more pro-European than might have been expected. He argues that there are strong reasons to support a renegotiation of the UK’s position inside the EU and that a referendum on this new agreement could re-engage British citizens with the European project.

This article was first published on LSE’s EUROPP blog

I read the complete text of David Cameron’s speech before reading any of the commentary in newspapers, on the various blogs or from the usual twitterati. And I’m so glad I did. I came away from an unadulterated reading of the speech pleasantly surprised. This surprise in part reflects my prior fears that Cameron would deliver the most anti-European speech of any British Prime Minister. Instead, the speech is remarkably pro-European given current domestic circumstances – especially the shrillness of the anti-European tabloids, the Europhobia of some Tory backbenchers, and the rising UKIP tide.

The Prime Minister made the case for Europe, for the EU single market, for Britain as a European power, and even for deeper integration in the Eurozone. Admittedly he wants a somewhat different EU: less federal and more intergovernmental, and a more ‘free’ and less ‘social’ single market. But, these preferences are identical to those of his predecessors, including Thatcher, Major, Blair and Brown (just read Sir Stephen Wall’s excellent A Stranger in Europe to see the common thread).

Now the PM did say some silly things, such as claiming that there’s no Single Market Council. There is exactly such a Council, but it was renamed the ‘Competitiveness Council’ at the insistence of the previous British government (are Cameron’s speechwriters really so ignorant ? Yikes!). He also said some things I very much disagree with. He trusts national parliaments to hold politicians to account and to represent citizens’ interests far more than I do. Most national MPs are more beholden to their parties than MEPs are. I also disagree that there can never be a European demos. There certainly isn’t one now. But this assumption underestimates how fast allegiances can shift. Twenty years ago most commentators thought fans would stop supporting Arsenal or Man United if their teams were full of foreign players! I can imagine that 20 years from now people will have no trouble identifying with politicians from other countries in a battle for an EU Presidency.

But, these disagreements are on abstract or marginal matters. On three issues that really matter, I am broadly in agreement. First, I agree there needs to be new guarantees for the states that have not adopted the euro, so that their interests will be protected from potential spillover effects of deeper macroeconomic integration in the Eurozone. For example, there could be a treaty protocol or European Council declaration which guarantees that no decision can be made by the Eurozone states that potentially damages the interests of the other states in the single market: a sort of new Luxembourg Compromise.

Second, I agree there needs to be more strategic thinking about how Europe can remain competitive in a globalising world, via reform of single market rules (does anyone really support the working time directive?), reform of the common agricultural policy, and further liberalisation of the services sector and energy markets. With a guarantee to protect the interests of non-Eurozone states and a commitment to economic reform in the single market, this might just be enough for Cameron to claim a “new deal” for Britain in the EU. Britain already opts-out of most other things, such as justice and home affairs and police and judicial cooperation.

Third, if he can secure such a deal, I agree this deal should be subject to an in/out referendum. Referendums are the only way to legitimise major constitutional changes, and what has happened in the EU over the past few decades has been a major constitutional change: the creation of a new continental-scale supranational polity. We should have had a referendum on the Single European Act or the Maastricht Treaty. And, there is plenty of evidence from countries where referendums have been held that these votes have fostered debate, transformed public understanding of the EU, and provided new legitimacy for the project.

Contrast the trajectory of public support for the EU in Britain and Denmark over the past 30 years. When the UK and Denmark joined in 1973, Brits and Danes had similarly low levels of support for the EU (and similarly high levels of anti-German sentiment). After several EU referendums, the Danes are now strongly pro-European. This change is not solely a result of referendums. But referendums have played a major role in promoting public debates, public understanding and a new confidence in Denmark’s position in the EU.

So, my optimistic scenario is that Cameron has been sufficiently pro-European and vague about what he wants that Europe can agree a “new relationship” between Britain and the EU, and that this is then backed by a majority in a referendum. No doubt, many Eurosceptics will claim that anything less than a repatriation of a shopping list of EU policies will mean we have ‘sold out to Europe’. But, when push comes to shove, I am confident that the average British voter is sufficiently intelligent, economically self-interested, open-minded and worldly-wise to see that it is in our collective economic and political interests, and the interests of future generations of people born on these islands, that Britain remains part of what is the most successful project in supranational institution-building, peace-making and prosperity-promotion in human history.

And if the British people vote No, so be it. It would be a democratic choice, and in the end we’ll survive.

Simon Hix is Director of the Political Science and Political Economy Group at the LSE and is the co-editor of the journal European Union Politics. Simon has extensive consultancy experience, including for the UK Cabinet Office and Foreign and Commonwealth Office, the European Parliament, the European Commission, the European Policy Centre, and has given evidence to the European affairs committees in the House of Lords and House of Commons. He has written several books on the EU and comparative politics, including most recently “What’s Wrong With the EU and How to Fix It” (Polity, 2008).

New houses, unfair pay, and vegetarians eating kebabs: round up of political blogs for 19 – 25 November 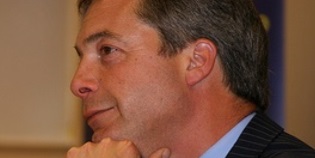