With the deepest cuts to public services since the war looming, commentators are predicting a raft of strikes by public sector workers across the UK. Richard Hyman looks at how laws regulating strike action across Europe may affect how this plays out.

When looking through the papers on days following industrial action, it would appear that the press believes if strikes are to be allowed at all they should only take place between consenting adults in private. Anything that the public might notice is a strike too far. But of course, the whole point of a strike is to cause inconvenience. It’s a sign that employees want their interests taken seriously and that they feel their views are being ignored. To be unable to withdraw one’s labour is the condition of the slave.

All countries have laws regulating strikes. Those in the UK are among the most restrictive in the world. Most legal systems define a right to strike, in some cases it is  enshrined in the constitution. Britain has no such positive right, only a bounded liberty the limits of which have become increasingly narrow. The rules on strike ballots are so complex and intrusive that almost any action can be invalidated on a technicality (and there are specialist law firms doing good business pursuing these), as British Airways proved recently when it stopped one round of cabin crew strikes using these arguments.

The issues over which a strike may be called lawfully are also tightly circumscribed. In particular, the prohibition of solidarity action – which is legal in most of Europe – gives employers an incentive to hive off or subcontract functions that are part of its core business. Rupert Murdoch exploited this ruthlessly when he moved his newspapers’ printing operations to Wapping. We saw another example recently with the Gate Gourmet dispute, involving workers who had previously been directly employed by British Airways; BA staff could no longer lawfully support them. Secondary action also raises the overall number of disputes. In 2006, the UK has nearly 160 individual disputes whereas Belgium had 952, Spain has 779, Denmark had 476 and Italy had 459.

Where a positive right to strike exists, stopping work does not usually constitute a breach of contract. In Britain it does. The corollary is to render strikers liable to discipline or dismissal, and though legislation has placed some limits on such sanctions, the protections are weak.

What about essential services? Rules vary considerably. Indeed, in a few countries, firefighters are not allowed to strike. In others, conversely, there are fewer restrictions than in the UK. In Sweden, for example, all public employees – including police and armed forces – have a right to strike. It can be difficult to compare strike rates in the public and private sector across Europe. In the UK, a relatively high proportion of the most strike-prone industries are, or previously were, in the public sector.

Generally in countries where the right to strike in particular categories of public services is limited, functional alternatives are provided to resolve disputes, such as independent arbitration. Or else there are general rules that changes in working conditions must be negotiated with employee representatives, in works councils for example.

These restrictions may in part explain why the UK has fewer strikes, and fewer working days lost due to strikes, than either the EU or OECD country average (although the number of comparative strike days are growing): 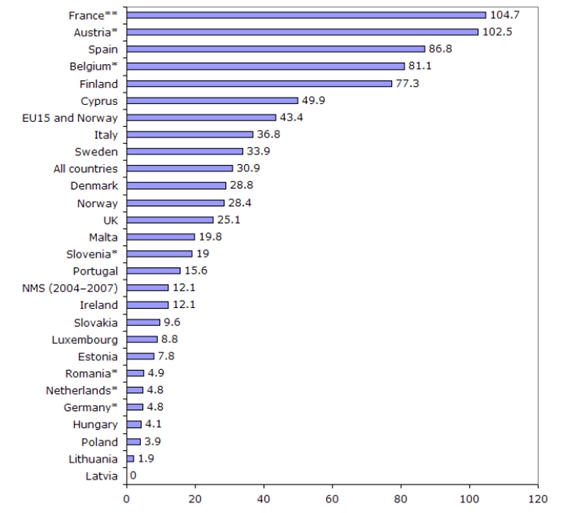 From recent arguments in the press, one would not imagine that the strike rate in Britain is below the average in the European Union or in industrialised countries more generally. But as the graphs indicate, this is not the message of the official statistics

Additionally, in the UK, the mechanisms in place to resolve disputes generally mean that although a relatively large number of strike ballots are called, many fewer are actually held:

Those who demand even tougher restrictions on strikes in this country usually want to have their cake and eat it too. In their view, management should be free to make unilateral changes to work practices, staffing levels or safety procedures, but employees should be prevented from reacting collectively. In a phrase familiar at the LSE, this is the road to serfdom.