Does devolution bring welfare improvements? Joan Costa Font argues that evidence from the devolution of traffic responsibilities to the Basque Country and Catalonia by the Spanish government, suggests that decentralisation has managed to significantly reduce traffic accident deaths. Such a change in the UK, where lower speed limits and safety regulations have not yet garnered a great deal of support, could be beneficial if implemented by the devolved countries.

Processes of devolution are becoming more common in the western world. These processes are primarily justified when policy preferences differ between territories, most typically because of differences in cultural backgrounds and social identities.  In some cases different preferred policy strategies can be implemented to deal with common problems (e.g., traffic accidents), which in turn allow for experimentation and, can actually benefit the country as a whole if successful innovations end up being disseminated across the board. Spain’s devolved regions of Catalonia and the Basque country have been given traffic responsibilities, which have led to a considerable fall in fatal accident mortality. Could we follow the same example in the UK to reduce the nearly 2,000 annual road accident deaths?

The result of devolution was the establishment of the Basque and later the Catalan Road traffic services, including a separate police organization. In the case of the Basque Country, specific committees that evaluate specifically road traffic in the area were put in place from 1993.  Specific policies have been implemented to set different speed limits, conduct awareness campaigns, inspection and controls and territorial coordination, especially during the second quarter of 1990s.  Policies to change speed limits are especially relevant in the context of the UK, as has been previously discussed on this blog; they can have a huge influence over the number of road deaths.

Possibly, the most clear-cut outcome in evaluating devolution of road traffic responsibilities is the fatal road accident rate. The latter should be sensitive to investment in new policies to enhance safety, identify red spots and reduce speed in urban areas.  Figure 1 shows that the fatal road accident mortality exhibits a considerable drop in Spain, rate especially after the year 2000, but both the two region states with devolved road traffic responsibilities exhibit a widening a with the rest of the country which reflects a return on the specific policy strategies in those areas. 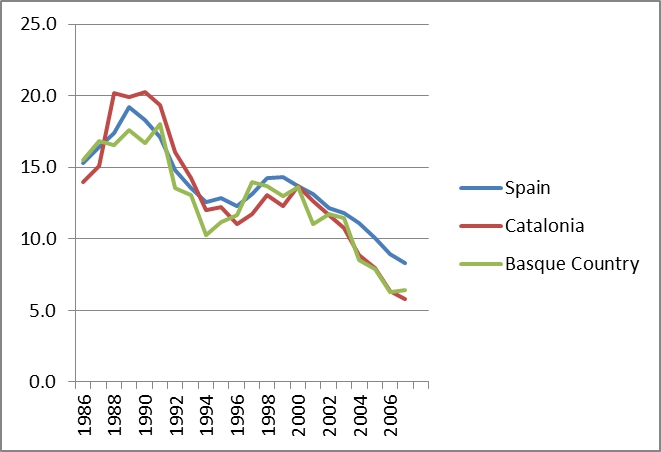 Devolution can potentially influence policy outcomes by not only responding to differences in policy priorities within a country, but especially to allow policy experimentation in regions. The Spanish case suggests that devolution in Catalonia and Basque Country pays off by reducing the rate of fatal traffic accidents. Other Spanish region states such as Galicia, Navarra and Madrid have requested the devolution of the traffic responsibilities based on such evidence, yet still with some reluctance by the central government.

This evidence speaks to the UK and more generally, as a country that already has policy devolution in unitary states such as Scotland and Wales.  Devolution can offer an opportunity to introduce policy reforms that aim at improving safety such as furthering speed limits, and more generally raising awareness and further coordination between different subnational governments. In the UK, some road traffic legislation issues are reserved for the UK Parliament, though road traffic accidents are a matter of legal controversy. Allowing the UK’s devolved to set out fully their own road traffic policy could bring further reductions in the number of fatal accidents in the UK.

An additional article on this subject is, Costa-Font, Joan and Salvador-Carulla, Luis and Cabases, Juan and Alonso, Jordi and McDaid, David (2011) Tackling neglect and mental health reform in a devolved system of welfare governance. Journal of social policy, 40 pp. 295-312.

The Profumo affair 50 years on: The collapse of the old establishment has not brought enhanced democratic participation

The House of Commons’ Select Committees are now more independent of government. But are they any better informed?