Nearly as old as the internet, the peer-to-peer file sharing of music online has been a constant bugbear for the music industry, with claims of billions in lost revenues over the past decade. Bart Cammaerts and Bingchun Meng have found that despite these assertions, incomes from innovative online products such as LastFM and Spotify are complementing a resurgence of interest in live music and are driving up industry revenues.

Since the late 1990s peer-to-peer (p2p) file sharing networks have become ubiquitous. Over the past 15 years, law makers and the music industry have tried repeatedly to curtail music downloads citing breaches of copyright and massive impacts on industry revenues. The 2010 Digital Economy Act (DEA), which mandates Ofcom to set up a code to regulate the role of Internet Service Providers (ISPs) in curtailing online copyright infringements, is the latest in a line of governmental efforts aimed at preventing file-sharing, at a time when the music industry is actually finding new ways to engage and make money from online audiences.

In its first phase, the new DEA approach is dissuasive. Copyright holders can notify ISPs of IP addresses from which they suspect downloads or uploads of copyright protected content are originating. ISPs are then required to send warning letters to customers who are suspected of infringing copyright law. If the level of copyright infringement associated with file-sharing online is not declining, on the advice of Ofcom, the Secretary of State is mandated to bring a second – more repressive – phase comes into force which allows for persistent infringers to be disconnected from the internet.

Across the political and legal spectrum it is acknowledged that the DEA was rushed through Parliament without giving adequate consideration to the interests of various stakeholders, to the complex implications of its provisions for changes in cultural production and consumption, or to the changing technologies to produce, distribute and copy cultural content. The Act has been challenged in the UK High Court of Justice by ISPs on the grounds of its disproportionate response to online copyright infringement and its legality. The judicial review of the DEA is being heard in March 2011.

Is the music business really doing so badly?

The International Federation of the Phonographic Industry (IFPI) figures for music sales confirm a considerable decline in sales of recorded music over the last decade (figure 1). In the period 2004-2010, the music industry declined in value by 31 per cent. However, the  evidence is inconclusive as to the cause of this decline. 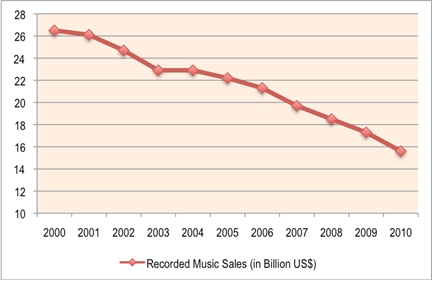 The claims by the music industry regarding the detrimental impact of infringing file-sharing on sales are flawed. According to the international industry lobby group, the music industry and its artists lost out on more than US$ 40 billion in revenue in 2008 because of piracy including (illegal) file-sharing. Claims about piracy and revenue losses are often based on the wishful thinking of rights holders. They assume that most unauthorized copies would be replaced by the sale of a legitimate product if file-sharing was effectively controlled. However, as Oberholzer-Gee and Strumpf  point out:

While downloads occur on a vast scale, most users are likely individuals who in the absence of file sharing would not have bought the music they downloaded.

In recent decades, music consumption and the role music plays in people’s lives have changed drastically. For music audiences, music has increasingly become something immaterial or “ephemeral, its duration becomes compressed, and it becomes more of a process than a finished product”.

The IFPI figures exclude income from music publishing and live music performances. Revenues from live performances/DJing have increased considerably in recent years. In 2009 revenues from live music outperformed recorded music sales for the first time in the UK. While the recorded music industry was worth £1.36 billion, the value of the live music industry in 2009 was estimated at £1.54 billion. This includes a staggering £957 million in primary ticket revenues (up 5.8 per cent), £172 million in secondary ticketing revenues (up 15 per cent), and £408 million in additional receipts on the night (up 16 per cent).

Income from the sale of digital music is rising rapidly

In 2009, global sales of physical products – mostly CDs, but also vinyl – declined by 12.7 per cent. However, the sale of digital recordings through online platforms rose by 9 per cent, while the revenues from performance rights rose by almost 8 per cent. In the UK, total recorded music sales were up 1.9 per cent due to growth in digital sales and performance rights. Digital revenues from recorded music rose by 47.8 per cent last year in the UK from £127.8 million in 2008 to £188.9 million in 2009. Furthermore, total digital revenues, which also include online license fees, account for ‘a quarter of record labels’ revenue base’ and one in six albums in the UK were bought online. Internationally, a similar picture emerges for online sales of music. Growing from a small base, the value of the global market for digital music increased by 1,000 per cent in the period 2004 to 2010, and by 2010 represented 4.6 Billion US$ (Figure 2).

These rises in revenues from digital sales and online license fees do not fully compensate the industry for the decline in sales of CDs, but the decline in the sale of physical products cannot be exclusively or even in large part attributed to file-sharing of copyright protected content. 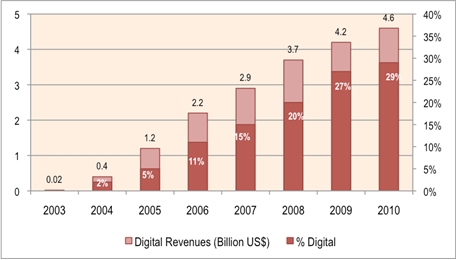 Innovative responses by the music industry

In recent years, the music industry has started to embrace the online sale of recorded music, witnessed by the steep rise in revenues from digital online sales (see Figure 3). Some artists and music labels are making full use of file-sharing and the participatory culture it sustains rather than rejecting it and alternative models for revenue generation are being developed.

The music industry’s recent strategy of providing consumer- and user-friendly alternatives enabling legal downloading and licensed streaming services such as LastFM or Spotify are proving attractive to those who might previously have engaged in file-sharing of infringing content. In the UK, a survey of teenagers indicates that increased use of licensed streaming services is displacing file-sharing as a way of accessing music.

Innovative music industry strategies are especially visible in the independent and alternative music segments of the industry. Revenues from live performances are being shared between artists and record labels; many labels are acting as booking agents for their artists and the proceeds are flowing into new releases. Some labels are publishing music exclusively online under creative commons licenses and accepting donations; a good example is the Sheffield netlabel Planet Terror Records, and there are many others.

Compared to the value of the mainstream music market, dominated by the ‘big four’ (EMI, Sony, Warner Music Group and Universal Music Group), these are relatively marginal activities, but the independent segment is connected to the mainstream players industry in many ways. Independent labels and artists serve as research and development divisions for the major labels, testing innovative models, identifying emerging (sub-)genres and upcoming talent.

By embracing the online participatory culture (some) artists are developing close relationships with their fans by connecting with the innovative potential of this vibrant participatory culture. Positive exposure online promotes brand recognition, notoriety and fame which draw potential music buyers to concerts. Online music sampling through downloading also encourages music purchasing by file-sharers.

Innovation in copyright is needed

The societal costs and the financial costs of enforcing copyright law in the digital services era, where consumer and citizen practices online diverge from legal expectation, are very high. It is imperative to revise copyright enforcement provisions in view of changing cultural practices and rapid technological innovation. The legal framework for copyright needs to be better aligned with the potential of innovation in the online everyday practices of consumers and citizens. Some contribution to the production of creative industry content is also needed so that creative talent is supported. This means that the policy agenda should be:

The music industry may not yet be fully engaging in the online participatory culture, but efforts to discipline a growing mass of online copyright infringers are inconsistent with the industry’s interests, with citizen and consumer interests, and with the goal of stimulating the creative industries’ contribution to economic growth.

This article is a version of a longer paper by the authors, Creative Destruction and Copyright Protection: Regulatory Responses to File-sharing.

We need fundamental innovation and change in local government