Experiments in the US consistently find that Get Out The Vote campaigns boost participation at election time. Is the same true for Britain? Using a field experiment carried out in cooperation with the Liberal Democrats in May 2017, Joshua Townsley finds that leaflets and canvass visits did boost turnout, but that postal voters were unaffected by campaign contact.

At election time, local parties dedicate a great deal of time and energy pounding the pavements in an effort to encourage fellow citizens to vote. For years, volunteers have delivered leaflets, knocked on doors, and made telephone calls on behalf of candidates. But do these efforts actually get voters to the polls?

We know that citizens are more likely to vote, generally speaking, if they are contacted by campaigns. A wealth of research, including numerous Get Out The Vote (GOTV) experiments based largely in the United States, backs this up. These studies find, on the whole, that face-to-face appeals (i.e. canvass visits) urging someone to vote are far more effective than less personal methods such as leaflets or phone calls. But there are two key limitations.

Firstly, we know less about the effect of such efforts when they come from political parties rather than from non-partisan, ‘civic’ organisations, especially here in the UK. Does party campaigning really increase voter turnout in Britain? A handful of existing experiments in the UK have found mixed evidence so far, suggesting more studies are needed to draw firm conclusions.

Secondly, virtually all GOTV experiments exclude ‘postal voters’ (those who are registered to vote by post a few weeks prior to polling day). For researchers, the reasons for this are largely logistic. Postal voters and in-person voters tend to cast their ballots at different times, making it problematic to time experiment treatments. But this is an important gap in existing research. Postal voting is on the rise, and due to their very high turnout rate, postal voters are a major source of potential support for political parties. Despite this, however, we know little about whether the way in which voters cast their ballots impacts on the effectiveness of parties’ campaign efforts.

To test whether people contacted by a political party are more likely to vote, I carried out a field experiment in co-operation with the Liberal Democrats in East Anglia during the 2017 local elections. The area itself – Thedwastre North in Suffolk – is a Conservative stronghold. I randomly assigned 3,371 households containing 6,525 registered voters to receive either a) a Lib Dem leaflet or b) the same leaflet followed by a canvass visit from a volunteer. The rest were assigned to a control group. This process was replicated among those households containing postal voters as well as those containing no postal voters, in order to compare how the campaign affected each. The figure below illustrates this process. 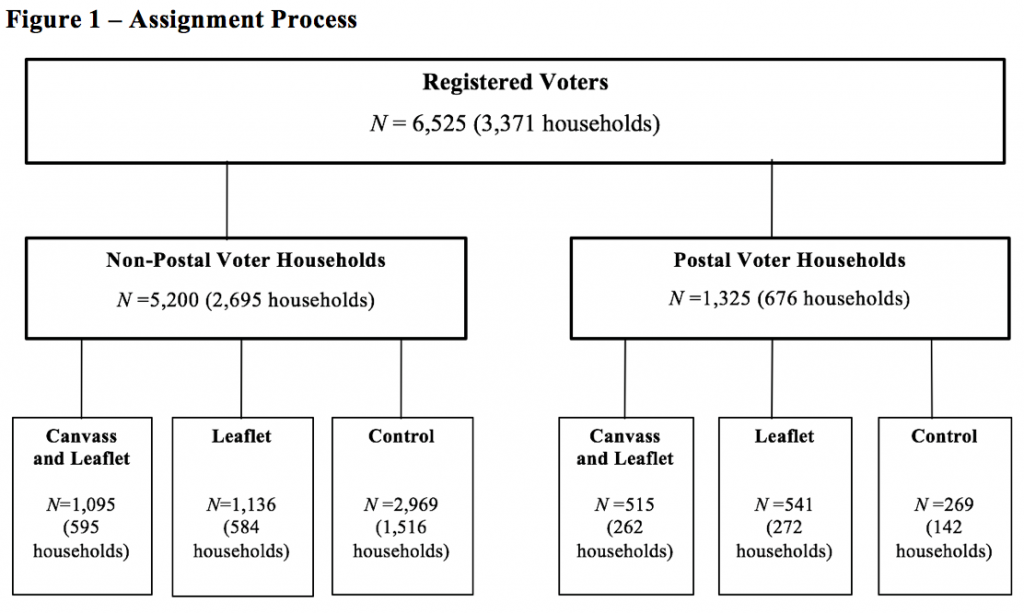 The leaflets were partisan in nature, mentioning local issues and manifesto commitments that covered areas under the remit of the local council, (e.g. libraries, transport, and schools). They were kept as ‘authentic’ as possible. The canvass scripts, too, mentioned local issues, introduced the candidate, and urged the recipient to vote. 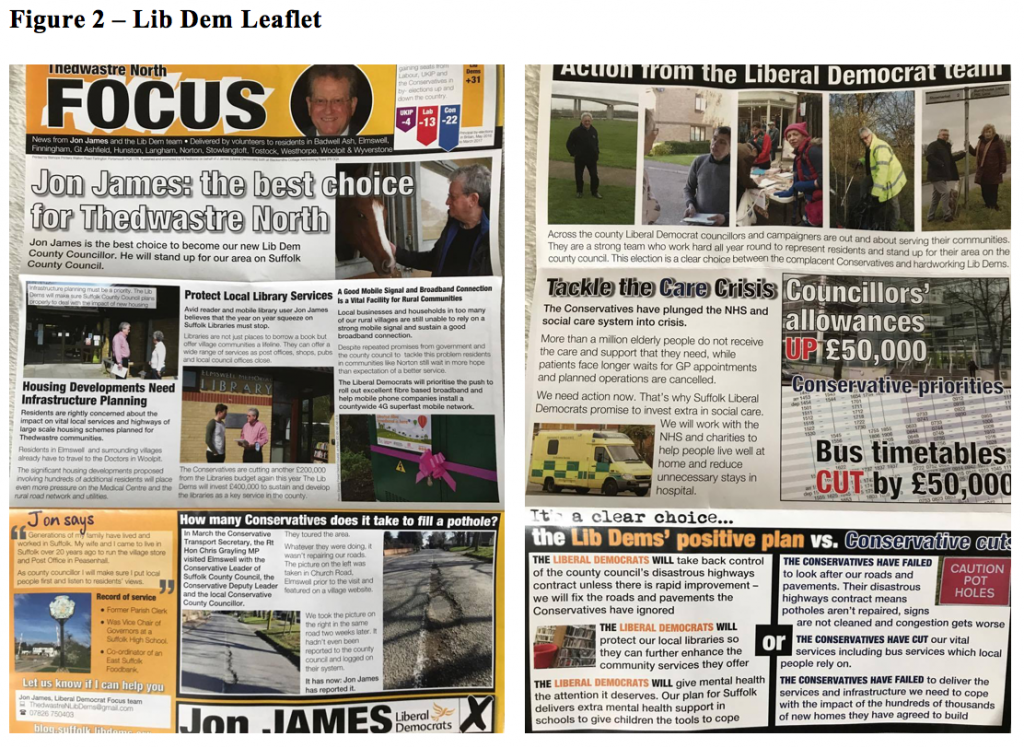 After the 2017 local election, the marked registers in the area were obtained from the local council (literally the register of names against which marks are made when individuals vote). These were then matched to the experiment records to measure the differences in turnout between the assigned groups.

The results revealed that those who were assigned to some form of Liberal Democrat campaigning were 3.6 percentage points more likely to vote, after controlling for other information about the voters including previous turnout and age. In experimental research, this is known as the ‘Intent To Treat’ (ITT) effect, and represents the effect of being assigned to receive that particular treatment.

But the ITT effect differed substantially between postal voters and non-postal voters. Among the latter, assignment to some form of campaign contact raised turnout by 4.6 percentage points. Among postal voters, who were already voting at a much higher rate – around 70% in the area – the effect was negligible. While people who were contacted by the party during the campaign were more likely to vote, those who were already highly likely to vote were largely unaffected. In essence, there was a ‘ceiling effect’.

Did the leaflets and the leaflet/canvass visit combination have different effects? In Figure 3, I plot the estimated effects of the two treatment combinations on the different types of voters (non-postal voters – left, postal voters – middle, and both combined – right). The horizontal line represents the ‘base’ turnout of the control groups, while the plots show the effect that the treatments had in relation to this. The vertical bars represent the 95% confidence intervals surrounding the effect estimates. 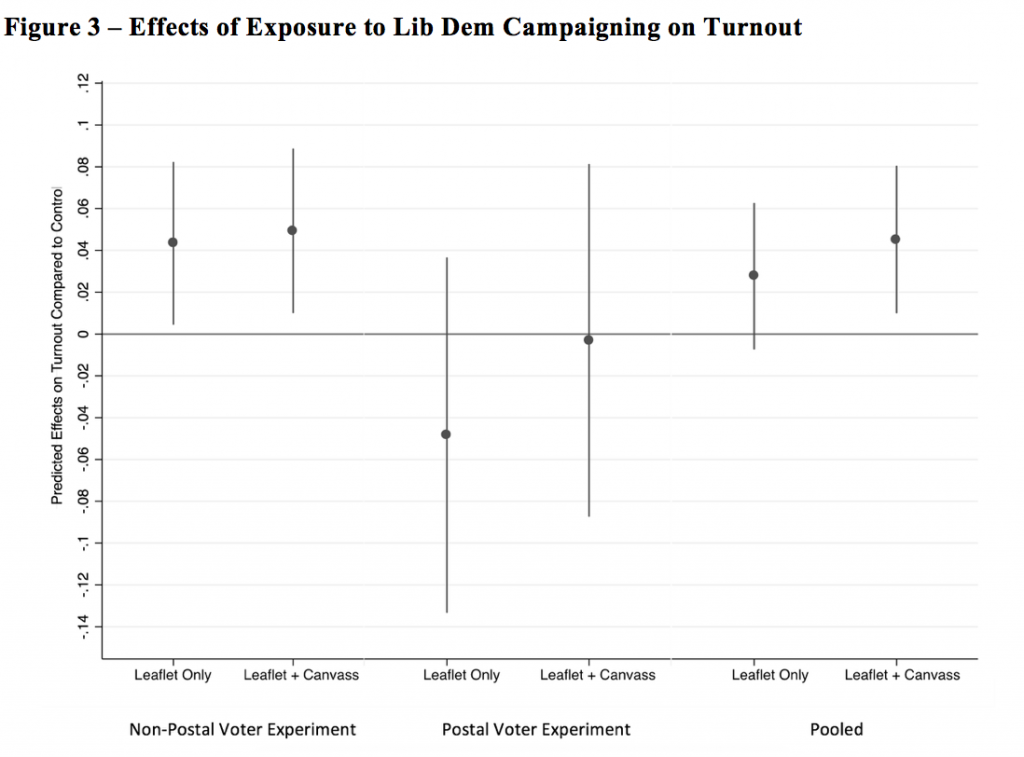 Overall, the study shows that traditional party campaigning does increase turnout at a local election – especially among those who are registered to cast their votes in-person. Postal voters, while unaffected by campaign contact in this study, merit further research. Postal voting is on the rise, and in some parliamentary constituencies, almost half of votes are now cast by post. Studying how best to gain their support is a worthwhile endeavour for political parties.

The effect of the leaflet is somewhat surprising, given what we know from non-partisan GOTV experiments conducted so far, which tend to find that leaflets have only minimal effects on turnout – if any. Face-to-face interactions with voters usually have more powerful effects. The effect is particularly surprising given the fact that in this particular part of East Anglia, the Liberal Democrats are a small force electorally (winning less than 5% of the vote at the last contest). Therefore, it seems unlikely (though not entirely impossible) that the leaflets mobilised a large number of dormant party supporters. It may be that given the area is dominated by the Conservatives, the efforts of a Liberal Democrat campaign that included bright and colourful leaflets were simply more noticeable. Whatever the mechanism, it seems that leaflets, by themselves, can provide a boost to turnout.

This article is based on the author’s paper, ‘Is it worth door-knocking? Evidence from a UK-based GOTV field experiment on the effect of party leaflets and canvass visits on voter turnout’, forthcoming in the journal Political Science Research and Methods.

Joshua Townsley is a Teaching Fellow at the University of Warwick and Research Associate at the Sheffield Methods Institute. He researches electoral campaigns and political behaviour. Joshua also runs the LSE’s Democratic Dashboard voter information project. He tweets @JoshuaTownsley.