Public debate in the last two general elections saw significant input from UK fact-checkers. Jen Birks examines the role of fact-checking journalism during the 2017 and 2019 campaigns, and identifies differences in approaches as well as in the policy issues covered.

Amid concern about widespread manipulation and deceit in campaigning, fact-checking journalism is achieving new prominence in this election, with Channel 4 News FactCheck, BBC Reality Check, and independent charity Full Fact all breaking out from the digital side-lines with a greater broadcast media presence. This doesn’t appear to be down to the amount of fact-checking being done. Comparing the first 25 days of each campaign, there is a similar number of full fact-checking articles (with their own URL), but more short items, generally posted during live fact-checking events such as debates.

There is, however, a noticeable increase in the decisiveness of the verdicts this year, whereas in 2017 a third of items would be more accurately described as explainers. That was in no small part due to the 2017 Conservative strategy to focus on personality and leadership credentials over policy substance, leaving fact-checkers unpicking contradictory statements on issues such as social care and what was implied by a ‘hard Brexit.’ But this increase also seems to reflect a decision to move away from items merely comparing manifesto commitments. Most tellingly, this year the explanatory journalism from fact-checkers has turned to an analysis of underhand tactics and misleadingly edited videos reflecting the more propagandistic elements of this campaign. Nonetheless, there has been significant attention paid to substantive policy issues.

The most noticeable shift in the issues on which claims were checked this year was the prominence of Brexit, which last time around ranked a mid-table seventh in fact-checking attention. Despite 2017 being billed as the ‘Brexit election’, the issue dominated only in the press, remaining elusive on broadcast news and in fact-checking. Even in the debates, questions ostensibly about Brexit were actually about immigration in as much as they drew on any factual assertions.

This year, there has been more substance to campaigning on Brexit and it has accordingly shot up to the second most prominent issue, with more focus on specific trade issues related to Johnson’s deal. Considering that one particularly prominent and widely fact-checked trade claim was also about health (Labour’s claim that a trade deal with the US could cost the NHS £500 million higher drug prices), health came a strong first in the issue ranking. Within this, opposition claims about the effects of underfunding featured prominently, alongside the various spending promises and the Conservative attempt to count improvements in retention of nurses as part of a promised increase in numbers.

Fact-checking has slightly more closely followed the media agenda this year, but one outlier is evident in terms of disproportionate attention to policing, as compared to news reporting. In 2017 policing was a more prominent issue because Labour’s criticism of the cuts to police numbers resonated with reporting of the two terrorist attacks in Manchester and London. In this campaign, Johnson attempted to get ahead of one of Labour’s most successful attacks by promising 20,000 more officers – twice what Labour promised in 2017 but still 1,000 fewer than had been cut during austerity. 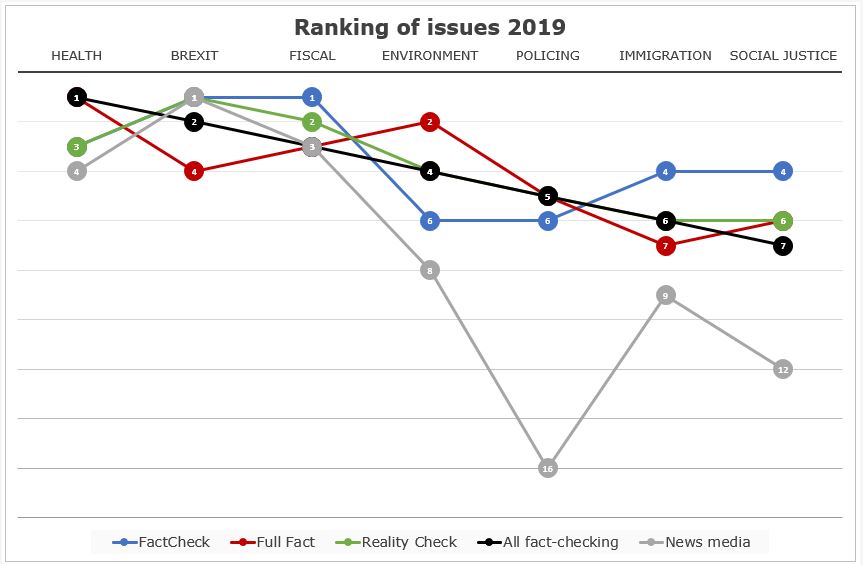 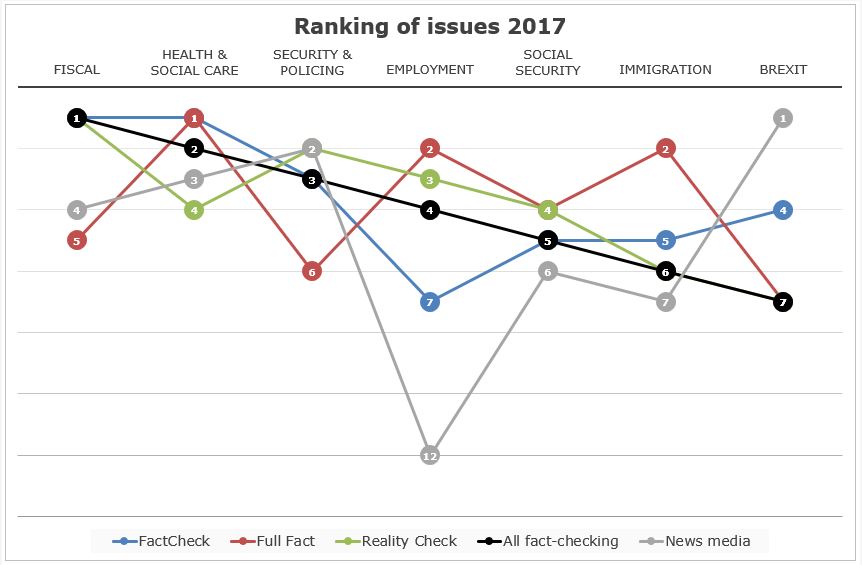 Fewer claims about government performance were chosen compared to 2017 when Labour’s manifesto claims about the problems caused by seven years of Conservative austerity were widely interrogated. A broadly similar number of Labour and Conservative claims were selected for checking, but as in 2017, the Conservatives were checked on a wider range of policies than Labour – Brexit, health and policing – whilst Labour’s plans were interrogated far more on their costings than on the substance of their pledges.

Labour were often checked on – and very likely made more claims on – the Conservatives’ record in government than were the Conservatives, highlighting the impact of austerity against a Tory focus on spending promises.

Whose claims are checked?

Fact-checking focuses overwhelmingly on the claims made by politicians – if anything there is even less focus on civil society expert claims this year, which seems to be a reflection of the campaign as a whole (where the IFS were the only expert source with any real presence) but fact-checking journalism might be expected to buck the trend in identifying interesting claims from outside the campaign strategies. However, fact-checking continues to be marked by elite indexing, almost entirely limited to the arguments of senior political figures, albeit slightly more often correcting rumours and hoaxes circulated by ordinary Twitter users.

As always, the devil is in the detail, and it will be interesting to see how fact-checkers have negotiated the rhetorical and misleading use of perfectly accurate facts in this elections compared to 2017. The prominent contestation of controversial claims on the impact of US trade talks on NHS costs and what constitutes ‘extra’ nurses shows that it has never been more important to go beyond checking the stats to really help voters navigate rhetorical campaign messaging.

Jen Birks is Assistant Professor in Culture Film and Media at the University of Nottingham. Her latest book, Fact-checking and Political Argumentation, is currently available as an e-book and comes out in hardback on 19 December.