The government is seeking to encourage business growth to improve the UK’s financial situation, and they have also stated a desire to help small and medium sized firms. These smaller firms are often family owned and run. Nicholas Bloom, Raffaella Sadun and John Van Reenen find that this type of firm often compares poorly with others in terms of their management and performance.

In emerging countries like India and Brazil, family-run firms are the norm, and even in the richer nations small and medium sized enterprises are predominantly family firms.  Despite their ubiquity, a longstanding battle has raged over whether family firms are really good for business. Having a large block of shares in the hands of a family may have its advantages. The classic problem of the dispersed share ownership structure in publicly listed companies is that no one shareholder has enough incentive to monitor the CEO. But a big family block provides stronger motivation to make sure senior management is not lining their pockets at the expense of the shareholders.

When primogeniture becomes a problem

The problem comes, though, when the family puts one of their own in the C-Suite, especially the when the eldest son becomes the CEO, primogeniture being the most common form of family succession. Some variation of the old saying “from clogs to clogs in three generations” exists across many cultures; in Chinese the proverb is “from paddy field to paddy field in three generations.”

There are three problems with family succession:

Many economic historians blamed Britain’s decline relative to America and Germany to “personal capitalism”. As Alfred Chandler wrote in Scale and Scope: “The Britain of the late 19th Century basked complacently in the sunset of economic hegemony. Now it was the turn of the 3rd generation . . . and the weakness of British enterprise reflected their combination of amateurism and complacency.” In the US, family firms have always been less popular, possibly because the Pilgrims themselves were not privileged first-born sons. And in Germany, although the Mittelstandt of medium-sized firms is dominated by family ownership, they tend to hire in professional managers to run their firms.

In defence of family firms

Supporters of family firms would counter that sons can learn at the feet of their fathers and so have better business skills in the chosen industry (although this must be less true when the firm grows large and more general managerial skills are needed). Defenders might also argue that family-run firms generate greater trust between owner and manager, as well as the firm and customers or workers. This is particularly important in developing countries where the rule of law is weak and reputation is all.

Theory is all well and good, but what does the data show? Our team in Harvard, Stanford, and LSE has surveyed many thousands of medium-sized firms in 20 countries, quantifying their management practices over shop floor operations, monitoring, and incentives. (For more on our efforts you can go to our World Management Survey.) We combine 18 questions to form an index of management quality ranging from 1 (truly awful) to 5 (outstanding in all dimensions). Our index is highly correlated with firm performance as measured by productivity, profitability, sales growth, and survival.

Figure 1 below shows the average management quality broken down by various types of ownership. Unsurprisingly, the best-run firms are those that have either private equity or dispersed ownership. Government-run firms are among the worst. More interestingly, family-owned firms with an outside CEO have a pretty good management score. It is only when family-owned firms are run by a family member (particularly the eldest son) that they seem to have very poor management. 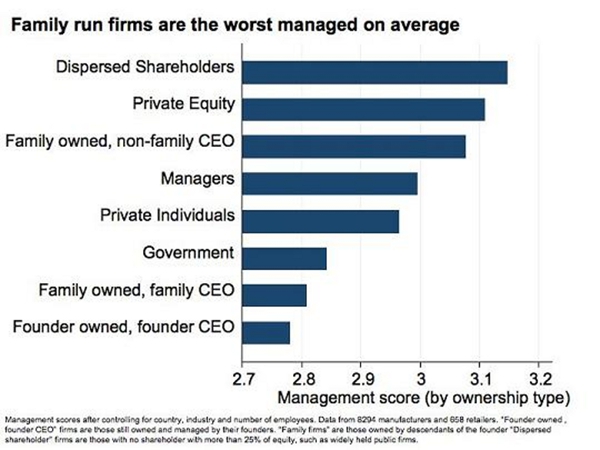 This depressing effect of family-run firms on management quality persists even after we control for a host of other variables such as age, size, industry, skills, and so forth. This finding is corroborated by studies which have examined changes in profitability or market value. The firm’s share price and profits usually take more of a tumble when the company is handed from the founder to his eldest son relative to an outsider. Studies of CEO succession also suggest that sons who become CEOs usually have poorer college results and are much younger than other CEOs.

These findings are only averages — there are many excellent family firms. Nevertheless, they are a salutary reminder that passing on the running of the business to the eldest son may not be the soundest business move. Family owners should at least consider the alternative of bringing in some professional outside management. Keeping things in the family can be bad for the wallet as well as the welfare of the next generation.

Nicholas Bloom – Stanford University
Nicholas Bloom is an associate professor in the Stanford Department of Economics. His main research interests are on measuring and explaining management and organisational practices across firms and countries, and trying to use this to explain differences in firm and country level growth. He also works on innovation and IT, looking at factors that effect these such as competition, tax, learning and Government regulations. He previously worked as a policy advisor at HM Treasury and as a management consultant a McKinsey & Company.

Raffaella Sadun – Harvard Business School
Raffaella Sadun is an assistant professor in the Strategy Unit at Harvard Business School. Professor Sadun’s research focuses on the economics of productivity, management and organizational change. Her research documents the economic and cultural determinants of managerial choices, as well as their implications for firm performance.

Professor John van Reenen – LSE Centre for Economic Performance
John Van Reenen is the Director of the Centre for Economic Performance (CEP), Europe’s leading applied economics research centre (http://cep.lse.ac.uk/). He is also a Professor of Economics at the London School of Economics and Political Science. He has been a senior policy advisor to the Secretary of State for Health, Downing Street and many international organisations. In 2008-2009 he was the Denning Visiting Professor of Global Business and Economics at Stanford University. He has published widely on the economics of innovation, labour markets and productivity. Professor Van Reenen received his BA from the University of Cambridge, his MSc from the London School of Economics and his PhD from University College London. He has written over 100 articles and book chapters and frequently appears in the media. He has been a CEPR Research Fellow since 1997. In 2009 he was awarded (jointly with Fabrizio Zilibotti) the Yrjö Jahnsson Award.