Five minutes with Tim Harford (Part 2): “The question is: Can we all become robot overseers or are some of us just not up to it?”

Five minutes with Tim Harford (Part 2): “The question is: Can we all become robot overseers or are some of us just not up to it?”

In part 2 of our conversation with Tim Harford, author of The Undercover Economist Strikes Back, we discuss a range of topics, from the impact of technology on the labour market to ‘happynomics’. Tim recently gave a public lecture at the LSE in which he discusses his new book in greater depth.

In your new book about macroeconomics, you touch on the discipline’s failures with regards to the financial crisis and Great Recession. Where do you see macroeconomics headed?

There’s so many interesting frontiers in economics and in macroeconomics specifically. The recent financial crisis and severe recession has been a shock. From the shock will come change. It took a while in the 1930s. You could say it took a while in the 1970s too. People will have to shuffle off and retire; young blood needs to get tenure. So the change is slow.

Particularly promising is banking. We used to find banking interesting as macroeconomists and we left it alone for a while, now people realise banking’s important again. Also, complexity is really interesting. There’s always a questions as how you’re ever going to integrate it into regular economics though. We are getting to a point where we can now actually model entire economies on a person by person basis. You can start to see in a few years time you might even have the data to plug in thanks to progress in big data. That’s going to be a game changer.

In macroeconomics it seems to be much harder. I spoke to Robert Shiller co-author of a very interesting book with George Akerlof [and recent Nobel laureate in economics] about trying to get psychology into macroeconomics and he said that it’s hard to even get people to disagree with him; hard to get people to show up and discuss it at all. That has got to change because there are clearly so many important psychological elements in what we understand about the business cycle and financial crises.

In the chapter of your book on inequality you talk about the hollowing out of the labour market and technological advancements being a cause of that. What will happen down the line?

Technology lets us do all kinds of things and we have got to be the masters of it. But the challenge is that, historically, a lot of people have not been in a position to take advantage of those opportunities for any number of reasons that people can argue about. Simply just having a work ethic and being willing to shift stuff around, carry stuff, move stuff – those sorts of skills – is becoming less and less useful and that’s a real threat.

The question is: Can we all become robot overseers or are some of us just not up to it? If the robots really do seriously impinge on the labour market, in a way they’ve never quite done before but really seems to be happening now, it is possible to imagine a labour market where 80 per cent of the work force has no economic value at all. And that is a very different sort of world.

Historically we’ve always said that almost everybody with a few exceptions (those who are very ill or disabled, for instance) has an economic value. Everybody can just go out there and sell their labour. There will be inequalities but everyone has a value economically speaking. We may be in a situation in the future where you still have value as a human being – you still have social value, moral value – but you don’t have any economic value. We don’t have an economic system geared up to cope with that at all, not even close. I don’t even know what it would look like. We haven’t even begun to wrestle with this.

A chapter in your book explores ‘happynomics’; the economics of subjective well-being which many prominent academics (such as Daniel Kahneman and the LSE’s Richard Layard) are championing. Could you explain your views on this new field of research?

I think [gathering information on people’s ‘happiness’] is worth doing. It’s going to add a little and it doesn’t cost very much, so why not? I just don’t see it as absolutely fundamental to the technical project of trying to make the economy work better. We learn things like unemployment makes people very sad. That’s useful, someone should tell George Osborne because he seems to think unemployment is something people enjoy and that the unemployed have to be punished. But generally most governments think unemployment is a bad thing and try to reduce it. It is not news that that should be a priority.

Richard Layard’s work says that unequal outcomes makes people less happy. So what’s that an argument for?: Some kind of redistributive tax. Do we have redistrubitive tax? Yes, we do. Is it an argument for more redistributve tax? No, not really. We already know that millionaires need the money less than people on the bread line so we redistribute, so just to say by the way millionaires don’t value money as much. We knew that, and we have already acted on that. Have we got a more refined understanding that radically changes our view? Not yet. Maybe in the future we will but not at the moment.

I absolutely believe in collecting subjective well-being data but I don’t see very many conclusions where you say: ‘wow that just changes everything’.

We asked our Twitter followers for questions. Here are a couple: 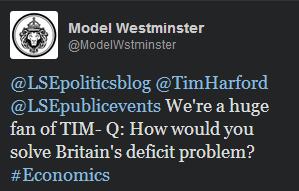 That presumes there is a deficit problem. We don’t seem to be having much problem funding it. I would say: slowly. 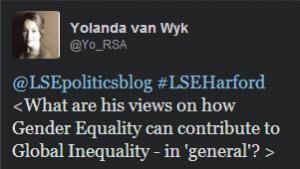 Gender inequality strikes me as a very important issue. It is something that I think you want to try to deal with on the ground in specific cases. I don’t think it helps us that much to say that there’s this very big thing that we call global inequality and there’s this other really big thing we call gender inequality and one of them feeds into the other. If we want to solve the problem as we must do, I think you need to be more practical and on the ground examples. Proud feminist though I am, I don’t think that that’s helpful.

Tim Harford is an economist, journalist and broadcaster. He is the author of “The Undercover Economist Strikes Back” and the million-selling “The Undercover Economist”, a senior columnist at the Financial Times, and the presenter of Radio 4′s “More or Less” and “Pop Up Ideas”. Tim has spoken at TED, PopTech and the Sydney Opera House and is a visiting fellow of Nuffield College, Oxford.