In this post, the team at electionforecast.co.uk discuss their current predictions for the East of England. They find that it is unlikely that there will be significant changes in distribution of seats across parties within the region and that the Conservatives are set to remain the dominant party in the East of England.

See Nick Wright’s analysis of the campaign in the East of England here.

In 2010, the 58 constituencies in the East of England were divided between Labour-Conservative and Conservative-Liberal Democrat battlegrounds. However, as the plot below suggests, the Conservatives won the vast majority of the seats in the region at the last election. The exceptions were Luton North and Luton South, which were won by the Labour Party, and Cambridge, Colchester, North Norfolk, and Norwich South, which went to the Lib Dems. 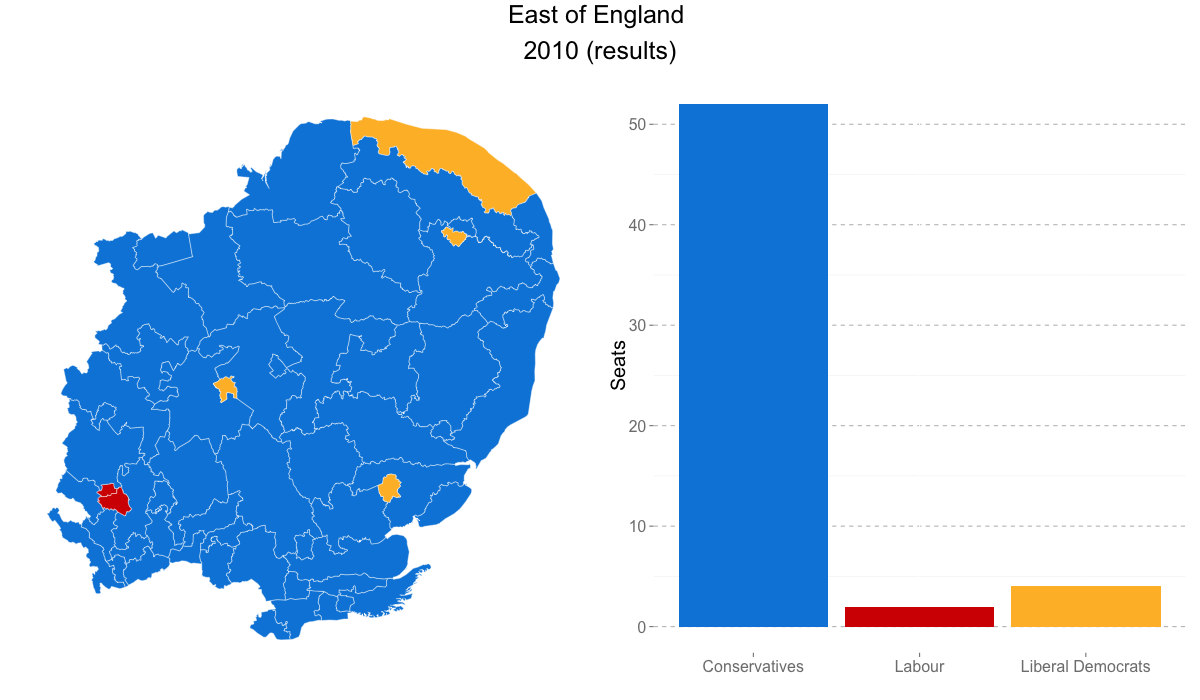 Our headline forecasts for the region suggest that there will not be a dramatic change in the distribution of seats in 2015. The graph below shows our predictions for each constituency in the region. Our current prediction is that the Conservatives will have 48 seats, Labour 6, Lib Dems 3 and UKIP 1. This implies that Labour will win Bedford, Ipswich, and Waveney from the Conservatives, and Norwich South from the Liberal Democrats. 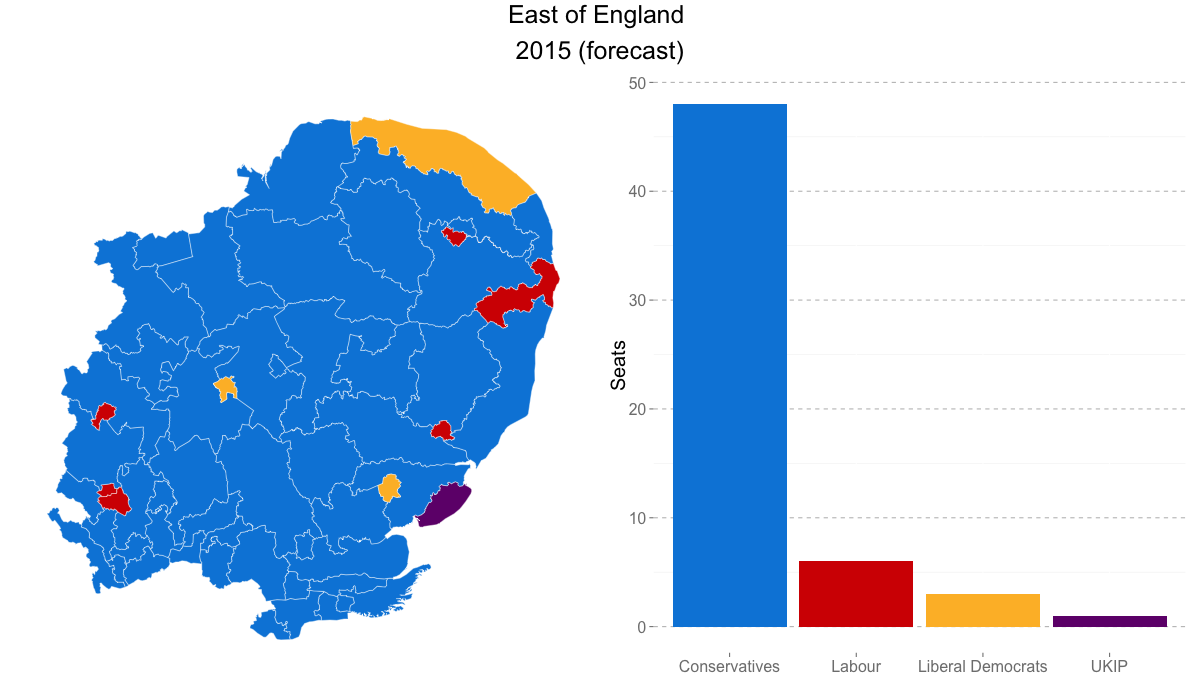 However, as Nick Wright makes clear in his post on the East of England, a major part of the battle in the east will likely focus on convincing voters that the region has not been forgotten by central government. This is largely in response to the threat posed by UKIP, who have established a strong ground-movement in the region, and performed well in the east during the 2014 European elections.

While we predict that UKIP will win just one seat (in Clacton), we also predict that UKIP will win 14.2% of the popular vote in the region. The discrepancy between the large share of the vote, and the small share of the parliamentary seats is likely because UKIP’s vote share is distributed very inefficiently. This is made clear by the images below, which show our predictions for the second-place party in each constituency. 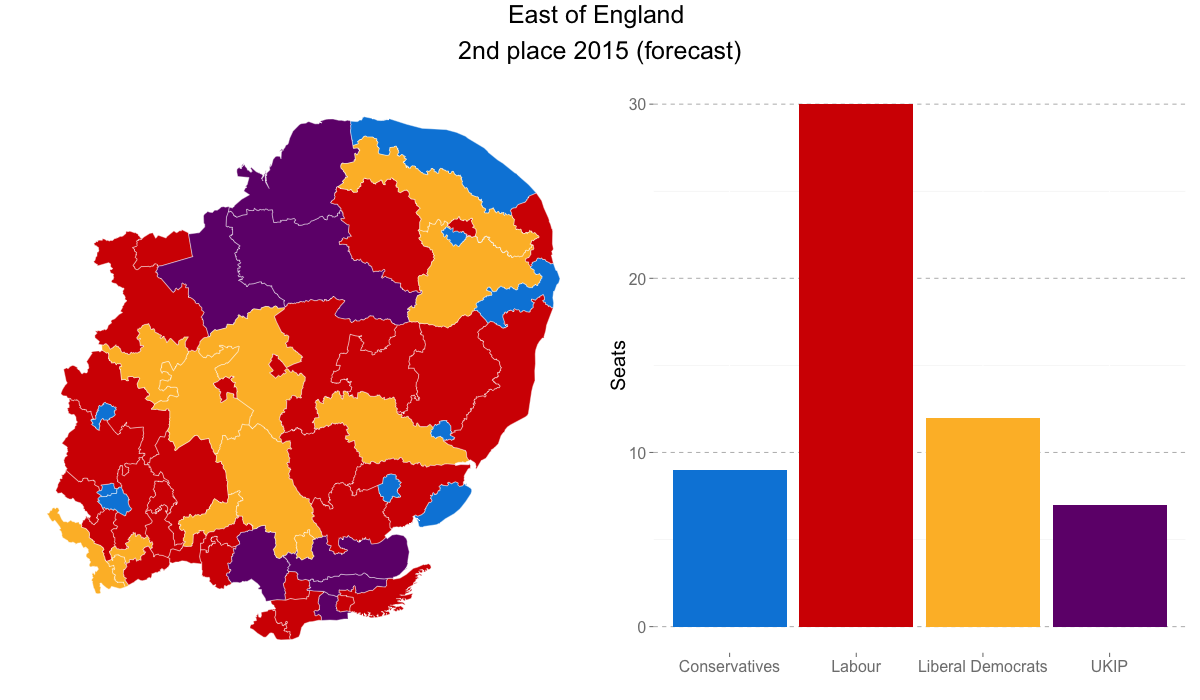 There are several seats in which we are predicting that UKIP will come second. These include Brentwood and Ongar, Castle Point, Maldon, North East Cambridgeshire, North West Norfolk, Rayleigh and Wickford, and South West Norfolk. Our model is bearish about UKIP’s chances in most of the constituencies where they are predicted to come second. The narrowest margin of victory, when UKIP is in second place, is in Castle Point, where the model still predicts a 14-point win for the Conservatives.

Overall, it is unlikely that the partisan composition of MPs from the East of England will change dramatically in 2015, and the Conservatives are set to remain the dominant party. However, as we have argued here, the headline figures mask significant electoral movement beneath the surface, particularly with regard to UKIP. We will continue to update our forecasts with new polling data as it is released, and updated forecasts for the East of England, as well as for the rest of the UK, can be found at our website.