New discoveries and extraction techniques have created a buzz about a ‘dash for gas’ in the UK. Samuela Bassi argues in favour of the UK using gas as a way to move off dirtier energy sources such as coal, but that it is used judiciously in those areas where it offers the greatest contribution to decarbonising the power sector. Investment in complementary technologies, such as CCS and flexibility measures to accommodate intermittent renewables, will be essential to ensure that future UK electricity generation is consistent with emissions targets.

Opinion is divided on shale gas. Depending on who you speak to, shale gas is either an energy game changer, heralding a new age of cheap energy, cleaner air and prosperity; or an environmental catastrophe that threatens to accelerate global warming and pollute water supplies.  However, in a recent report by the LSE’s Grantham Research Institute on Climate Change and the Environment, we have urged a more level-headed approach.

In the report we argue that the UK should use natural gas, including shale gas, to help decarbonise its power sector by replacing coal over the next few years, but should not assume that its price will be low. Enthusiasm for natural gas to play a much bigger role in electricity generation, based on an assumption that shale gas discoveries will make natural gas cheap and plentiful, is likely to be misplaced and a renewed ‘dash for gas’ is a risky option for the UK.

A lower risk option is a ‘dash’ for smart gas, where natural gas is used judiciously in those areas where it offers the greatest contribution to decarbonising the power sector. This means that in the short term gas-fired power plants should be used to replace ‘dirtier’ coal ones, while in the medium to long term their role should be limited to balancing supply from increasing amounts of intermittent renewables, like wind and solar, or expanded only of they are fitted with carbon capture and storage (CCS) technology

A number of facts bring us to this conclusion. First, natural gas will continue to play an important role in the UK energy mix over the coming decades, for both heating and electricity generation. Should gas prices fall, for example as a consequence of increasing worldwide supply of gas from unconventional sources, there could be positive consequences for the UK economy.

Second, low gas prices are not guaranteed and there are large uncertainties around future price forecasts. Several estimates, including by the International Energy Agency, indicate that gas prices in the UK and European Union are more likely to increase than fall over the next two decades (see table 1 below). 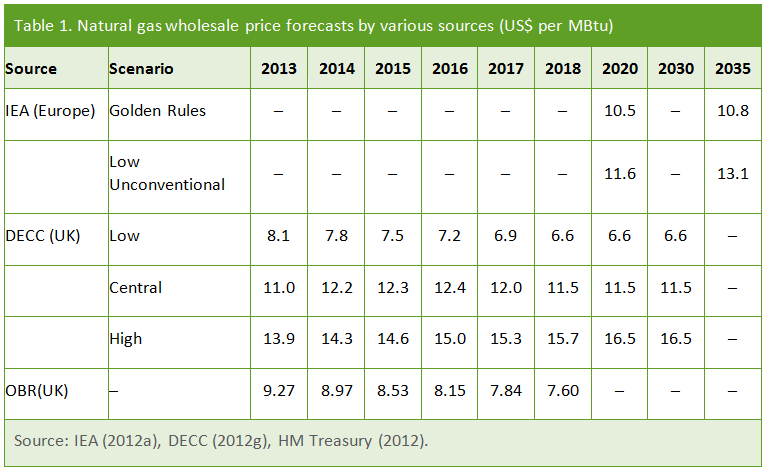 Fourth, there is great uncertainty around the actual amount of shale gas that can be commercially extracted in the UK. The latest available estimates suggest that shale gas could, at best, make up for the decreasing domestic supplies of natural gas, but will not be sufficient to render the UK free from the need to import natural gas (see Figure 1). The UK gas market is likely to remain largely driven by wholesale prices charged by foreign gas suppliers. The effect of shale gas production on household and business electricity bills could therefore be limited. Furthermore, in the short term, establishing a shale gas industry will face infrastructure challenges similar to those experienced by other new technologies, such as renewables. This means that the shale gas industry could take a couple of decades to reach maturity in the UK, and its scale could be constrained not only by resource availability and costs, but also by issues such as planning and public acceptability. 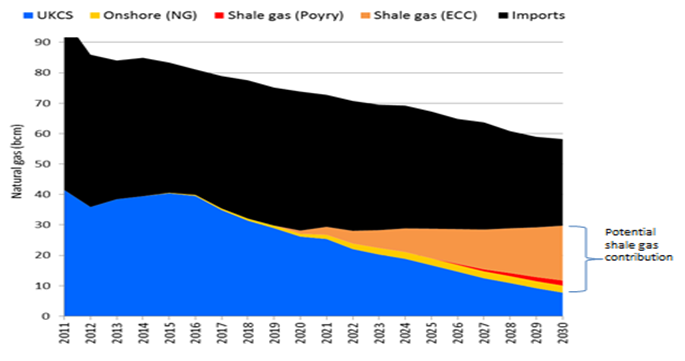 Fifth, investment in complementary technologies, such as CCS and flexibility measures to accommodate intermittent renewables, will be essential to ensure that future UK electricity generation is consistent with emissions targets. In particular, it is important to find out as soon as possible whether gas-fired power stations fitted with CCS can become economically viable within the next decade or so.

In sum, natural gas will continue to be important during the transition to a low-carbon electricity system. But if the UK is to meet its carbon targets in a least-cost way, there is only a limited window for baseload generation from gas-fired power plants with unabated emissions, during which time it should replace coal. Gas can only play a more significant role beyond the 2020s if CCS technology is deployed on a commercial scale.

Current government thinking, most notably the UK Gas Generation Strategy, does not appear to have fully acknowledged these challenges. In particular, the Strategy’s central scenario builds on the assumption that by 2030 the carbon intensity of the power sector will be twice as high as the level recommended by the Committee on Climate Change in the fourth carbon budget (50g/kWh). More dangerously, the Strategy’s recommendation that ‘gas could play a more extensive role should the fourth carbon budget be revised upwards’ could jeopardise the UK achieving its mandatory emissions targets at least cost.

Samuela Bassi is a Policy Analyst at the Grantham Research Institute on Climate Change and the Environment at the London School of Economics and Political Science. This article is based on policy brief: A UK dash for smart gas.