A pledge to provide free childcare is included on all party manifestos, but the scheme is based on unlear assumptions about the impact of such provisions, writes Antonia Simon. She explains why free childcare in itself may be a problem, and why it must be accompanied by policies of better pay for the workforce instead.

All political parties in their 2017 general election manifestos support provision of ‘free childcare’. This is a policy of ensuring all (working) parents with three and four year olds are entitled to claim ‘free’ formal childcare. However, the scheme is widely criticised because the free provision does not cover the cost of providing these free places. It is also unclear if this policy results in increased maternal employment and if an increase in formal childcare is indeed what parents need.

Currently the ‘free childcare’ scheme entitles parents to claim 15 ‘free’ hours. From September this provision will increase in England to 38 weeks per year for three and four year olds. It will be available to families where parents work at least 16 hours per week at the national minimum wage (but they must also be earning below £100,000).

The Conservatives say free childcare will be introduced for “working parents who find it difficult to manage the costs of childcare”. Labour is also supportive of free childcare, suggesting the scheme is extended to two-year-olds and “some” free provision for one-year-olds. The Liberal Democrats have pledged to provide free childcare for children of working families from the end of paid parental leave. The Green Party also wants free early education and childcare for all children. UKIP says it would promote nursery provision in shopping centres, office blocks, hospitals, airports, and railway stations.

Currently, there is no free childcare provision for children between when maternity pay ends and age two. Some parties have addressed this gap in childcare provision. The Green party for example proposes to provide support for parents from birth until the age of compulsory education. The Liberal Democrats also want to extend provision from the end of parental leave. These are noteworthy suggestions since the most difficult period for families is often from the end of maternity pay (usually after nine months) up to age two or three when childcare costs are the highest. Costs are particularly a barrier for families with two or more children, especially if they are close in age. 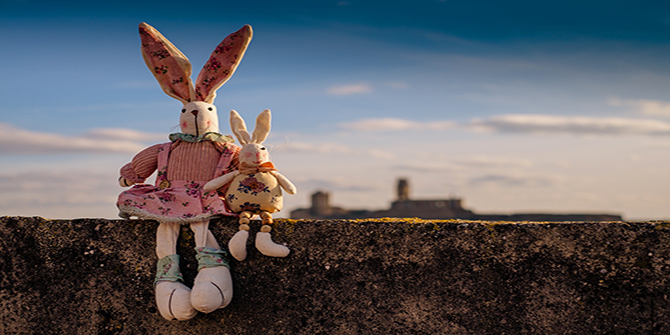 The main impetus behind the free childcare policy is an economic one: to increase maternal labour market participation and support parents to work more hours by improving the affordability of childcare, especially for those not currently using childcare because of a perceived cost barrier. There is also an assumption that formal (usually paid for) services are key to achieving the desired educational and development outcomes for young children. However, recent evidence suggests children in the UK do not have access to childcare of a sufficient standard to achieve desired developmental outcomes. Additionally, recent analysis of the likely impact of the free childcare provision has cast into doubt if it is an economically sound policy.

A recent report by the Institute of Fiscal Studies for example compared what happened to the labour market outcomes of mothers and fathers as their children moved from being entitled to a free part-time nursery place (offering 15 hours of free childcare per week) to a full-time place at primary school (30–35 hours of free childcare per week). The research found no evidence that maternal work patterns (or paternal work patterns) of parents with younger children were affected by the transition to more free funding. They infer from this that the plan to increase entitlement to 30 hours is likely to have limited economic benefits.

A reason why this free childcare policy may have limited success is that many mothers continue to use informal childcare (usually care by family or friends). In my research I found that over a third of all childcare is provided by grandparents, and that younger mothers were particularly likely to use informal childcare. Other evidence also shows some minority ethnic groups make greater use of informal care provision. This pattern of childcare use is most likely a result of formal childcare alone not meeting the needs of parents, especially those working atypical hours such as key workers and shift workers.

A concern raised by a recent Joseph Rowntree Foundation report is that a lack of access to flexible childcare may force parents to choose low-quality part-time jobs, trade down roles, or leave work altogether, which would place more parents at risk of poverty. It is important therefore that any future childcare provision addresses this need from parents for wraparound care that offers parents flexibility in how and when they use it.

In an attempt to address wraparound childcare, the Conservatives have pledged to “invest a capital fund to help primary schools develop nurseries where they currently do not have facilities to provide one”. They include in this a presumption that all primary schools will provide a nursery. But they do not provide any details about how schools will be supported to do this. It begs the question therefore as to how schools will be able to provide nursery places when school budgets are being cut and parents are reportedly being sent letters by schools asking them to subsidise school costs?

My research has shown that despite being increasingly qualified, childcare workers are amongst the lowest paid workers in the UK – earning on average 10 pence above the national minimum wage. If wages remain low for the sector, who will do this childcare within schools and how will they attract childcare workers to work there? Will they pay them more than or as much as teachers? The Labour party have at least started to think about these issues by pledging to “overhaul the existing childcare system”. A system which currently relies on government subsidies given directly to parents. Labour instead proposes to move to a system of government subsidy paid directly to “high-quality childcare places in mixed environments”. Labour also want to increase staff wages and enhance training opportunities for childcare workers. These policies of better pay for the workforce will be imperative for ensuring future childcare provision meets the demands and needs of parents.

Antonia Simon is Research Officer in the Department of Social Science at UCL’s Institute of Education.