Using a forecasting model that captures both the cyclical nature of the competition for power and the important role of prime ministers in elections, Matthew Lebo and Stephen Fisher predict 311 Conservative seats to 268 for Labour.

The idea of the political pendulum is that public opinion, and so government, alternates between the two main political parties on a fairly regular basis. Maybe there’s a cost of governing, or maybe voters come to feel it’s time for a change. Whatever the reason, there’s evidence for the political pendulum in many democracies. Most notably, the regularity is very strong in the USA where two terms of a president from one party are typically followed by two terms for the other party. Thus Trump’s victory in 2016 was helped by the pendulum swinging to the Republicans after two-terms of a Democratic president.

The pendulum is not unstoppable though. Leaders can halt it, and they can accelerate or decelerate it. By losing the popular vote Trump did not do as well as the pendulum predicted.

For Britain, Helmut Norpoth and Matthew Lebo’s PM and the Pendulum model has been a successful tool for forecasting elections since 2005. It captures both the cyclical nature of the competition for power and the important role of prime ministers in speeding up or slowing down the pendulum.

Without a fixed length of time between elections in Britain, the pendulum model measures time in elections, however close or far apart. So, terms have varying length in years. How quickly the pendulum swings against a government depends on how big the initial win. What’s more, if a government wins even bigger at subsequent elections they can buy their party more time on the clock. In this model, the scale of Margaret Thatcher’s victories in 1983 and 1987 helped John Major to win in 1992, but Tony Blair did not win big enough in 2005 to give Gordon Brown the advantage going into the 2010 election.

David Cameron’s 7-point leads in 2010 and 2015 were big enough for the pendulum to provide a just under two-point advantage for Theresa May going in to the 2017 election. She narrowly exceeded that expectation. Now, Boris Johnson is trying to deliver a fourth general election victory for the Conservatives in a row. The pendulum alone predicts he will fall short, with a narrow lead for Labour of 0.7 points.

Using Norpoth and Lebo’s vote swing to seats model, a 0.7 Labour lead suggests a hung parliament with 282 Conservative seats and 296 Labour seats. While such a result might well yield a Labour-led government, the historical pattern of the pendulum swing is not strong enough to say that Labour ought to be winning a majority at this election. 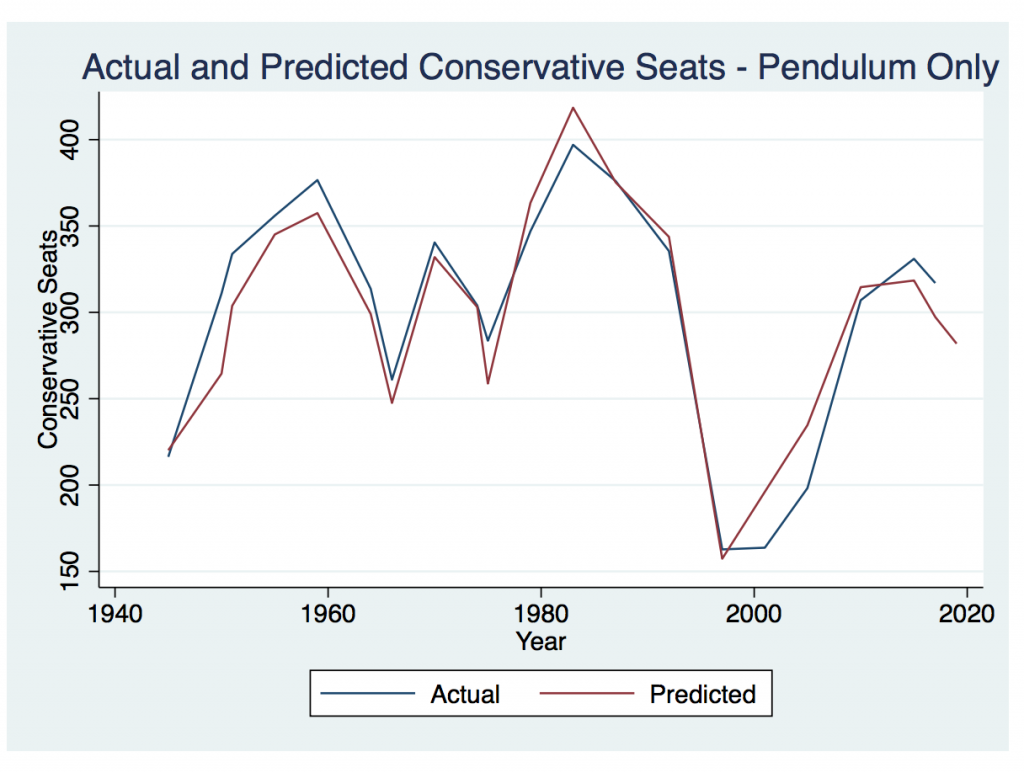 Prime ministerial approval and the pendulum together

The PM and the Pendulum model improves on the pendulum only model by also using the popularity of the prime minister as a predictor of election outcomes. This is not to say that summary judgments of the prime minister personally are the only things about public opinion that matter. The economy and other issues have an impact by affecting evaluations of the PM.

Boris Johnson is known by some commentators as the Marmite politician. Some love him, others loath him. Levels of satisfaction and dissatisfaction with Johnson net out close to zero. But since the PM and pendulum model focuses on the two main parties, it needs a way to account for the number of third-party supporters and how they tend to disapprove of the PM. The model does this by dividing the percentage approval by the proportion of people saying they will vote for one of the two main parties.

One further benefit of this measure is that it also takes account the popularity of the opposition. For instance, in 1997 there were a large number of people intending to vote for the two main parties, but very few approved of John Major. The low adjusted PM approval rating in effect showed quite a lot of support for Blair’s Labour party.

By the adjusted PM approval measure, Boris Johnson goes into this election in one of the strongest positions of any post-war prime minister; popular enough, relative to the two-party vote, to pull the Conservatives ahead. His average rating over September and October in Ipsos MORI polls of 41.5% is strong in an electorate when only 61% say they plan to vote for the Conservatives or Labour. With Johnson’s popularity factored in, the model predicts a 2.4 point Conservative lead over Labour. That suggests the Tories will end up with 311 seats, short of an overall majority but still comfortably ahead of Labour’s expected tally of 268 MPs.

Computer simulations can assess the uncertainty of the PM and pendulum model and show a 90% confidence interval for the Conservatives stretching from 269 to 356 seats. The estimates suggest that Boris Johnson has about a 1 in 4 chance of securing the majority (of 326 seats or more) that he needs to deliver his Brexit deal. 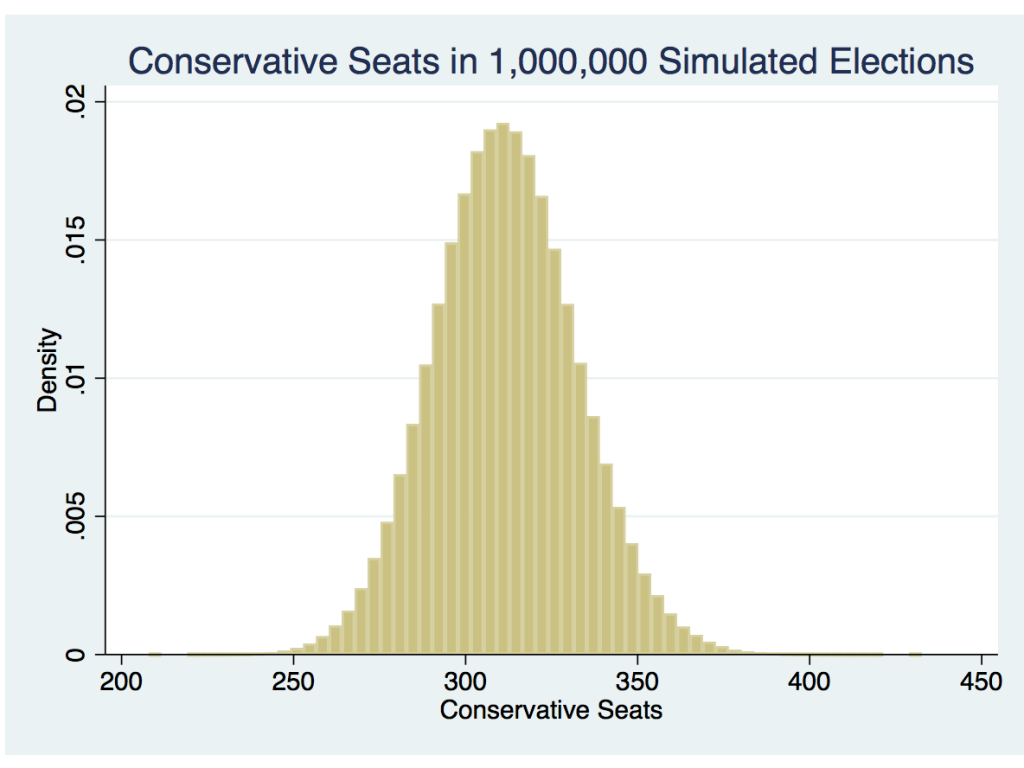 What to make of this forecast?

The vote intention opinion polls suggest the Conservatives are heading towards a comfortable majority. That is true also of the Ipsos MORI polls from which the PM approval data are drawn. So, there is a real discrepancy between the PM and pendulum model forecast and classic vote intention poll forecasts. With such different methods, there is no simple way to decompose the reasons for the difference.

It might seem as though the PM and pendulum model is likely to be wrong because it is too simplistic and also problematic in assuming that British politics still works as it did before the 2014 Scottish independence and 2016 Brexit referendums. Elections are no longer adequately characterised as a contest between just two parties, so why pay attention to a model that presumes just that?

While the model does not make forecasts for third parties, it does take into account the numbers of seats held collectively by the two main parties at the last election. So, in effect, the model assumes that the number of third-party seats is unlikely to change much from what it was in 2017. But since John Curtice has predicted record numbers of third-party seats, there is further reason to worry that the model may not work well this time.

The track record of the PM and pendulum model has been generally good. In 2005 it forecasted a Labour majority and lead of 132 seats over the Tories: the actual outcome a 159 seat lead. In 2010 it predicted a hung parliament with a slight edge for the Conservatives. The 311-265 prediction two months prior to Election Day was close to the eventual result of 307-258.

There is always a temptation for forecasters to tweak their methods to adapt to new political developments. In February 2015, Lebo and Norpoth made an initial forecast of a 7.1% Tory vote lead with 322 Tory seats and 254 Labour seats – very close for both the vote lead of 6.6 and the actual 331 Conservative and 232 Labour seats. But with the polls looking bad for the Conservatives and the complication of the first post-war coalition government, the authors made adjustments during the campaign, downgrading the popularity of the Prime Minister. Only later did they realize they would have done better to have left the pendulum model alone.

Under current political circumstances it is hard to trust that the pendulum’s swing is likely to thwart the Tories hope for a fourth term. Growing tired of the party in power is not the only underlying factor in the pendulum’s swing. The party in opposition usually gains standing during its years of opposition. The current unpopularity of Jeremy Corbyn and the fractured opposition to Brexit makes it difficult for some to see what the pendulum should swing back towards.

Whether or not the model forecast is accurate this year, the PM and pendulum model does provide a helpful historical basis on which to judge the performances of the two main parties. If Corbyn does manage to turn things around and win the most seats in a hung parliament, it will only be as expected given the swing of the pendulum would predict. He needs a majority to show a substantial achievement.

But if Boris Johnson secures the comfortable majority that the opinion polls suggest he will, then his achievement, and Jeremy Corbyn’s corresponding failure, will be historically remarkable. The pendulum really will have become stuck.

Matthew Lebo is Professor in the Department of Political Science at the University of Western Ontario. 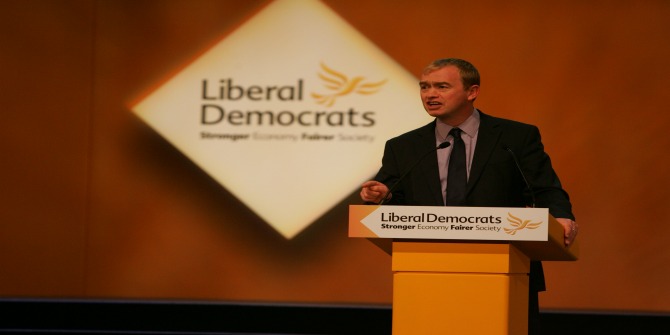