Dave Timms argues that the Green Deal will not by itself be enough to drive take-up of energy efficiency measures, particularly for the least energy efficient segment of UK’s housing stock; the private rented sector (PRS). Complementary regulation is required so that the combination of minimum standard regulations and appropriate financing mechanisms is achieved.

This is the ninth article in a series on climate change and environmental policy being hosted by British Politics and Policy at LSE.

Chris Huhne declared that it would be a ‘revolution’, Greg Barker said it would drive the “biggest home improvement programme since the Second World War” and now Ed Davey claims it will create a whole new market that will function “without subsidy or regulation”.

These extraordinary claims have been made by ministers for the coalition’s flagship energy efficiency policy – the Green Deal – which allows households to get energy efficiency measures with no upfront costs by attaching a loan to their property and paying back via an addition to their energy bills (which will now be lower thanks to the new insulation).

But can DECC really claim to have discovered the free-market holy grail of driving mass retrofit of the housing stock without subsidy or regulation? If any part of the housing stock needs a radical new policy to improve energy efficiency standards it is the Private Rented Sector (or PRS). So will the Green Deal alone deliver a revolution here?

Over 15 per cent of the English housing stock is privately rented. Properties with the very worst energy efficiency rating (Energy Performance Certificate Band G) are more than four times as common in the private rented sector as in the social sector.  PRS properties are the most likely to lack the basic energy efficiency measures such as loft and cavity wall insulation. The result is that 20 per cent of PRS households in England are in fuel poverty. In those 680,000 rented properties with the worst levels of energy efficiency (F and G rated), this rises to over forty per cent. It is estimated that £145 million is currently spent by the NHS in England every year treating illnesses caused by living in the worst cold rented homes.

There are a number of factors responsible for the sector literally ‘lagging’ behind: high turnover, fear of eviction and lack of access to Energy Performance Certificates mean tenants don’t ask for improvements. Landlords complain that investing in energy efficiency benefits the tenant but doesn’t increase the value of the property. Take-up of energy efficiency schemes and tax breaks (such as the Carbon Emissions Reduction Target) by landlords has historically been very low even when these offer measures at low cost or even free, indicating that the availability of the Green Deal as a means to avoid upfront capital costs will not by itself be enough to drive take-up of energy efficiency measures, and therefore would require regulation to complement it.

In 2010, over 30 organisations including consumer groups, children’s and older peoples charities, health, environmental groups, councils, housing and tenants’ rights campaigns came together to demand a new law to introduce a minimum standard of energy efficiency for private rented properties from 2016. After a year-long campaign, the government accepted the need for mandatory energy efficiency improvements in the sector and introduced an amendment to what is now the Energy Act 2011 that will, from 2018 at the latest, make it an offence to let properties with the worst two energy efficiency ratings (F and G).

The influence of the 2018 minimum standard contained in the Energy Act 2011 can be clearly seen in the table below with installation being driven to meet the deadline rather than by the Green Deal itself. The market driven owner occupied sector shows a very different trajectory. The comparison is especially dramatic considering the owner occupied sector is over four times the size of the PRS.

DECC’s own Impact Assessment for the Green Deal spells it out:

“The model predicts that in the owner occupied sector, uptake is relatively constant. In the private rented sector, activity increases more rapidly as landlords take steps to meet the private rental sector (PRS) supporting policy that comes into effect in 2018.Once this regulation has come into effect and the stock of F and G rated properties have been retrofitted, uptake declines.”

Table 1 – predicted take up of energy efficiency measures in the Private Rented Sector. Figures from DECC in personal correspondence. 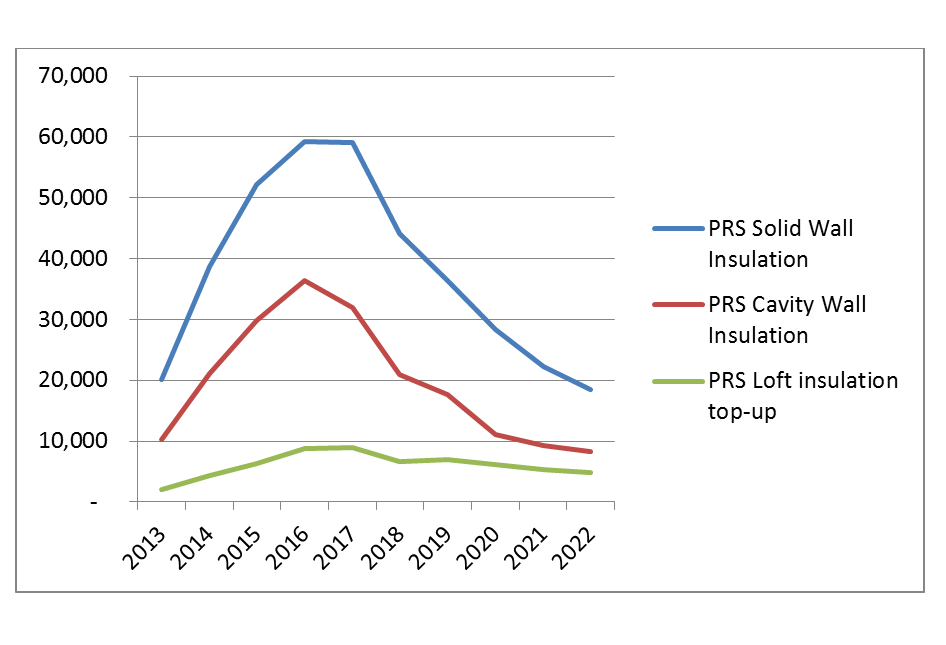 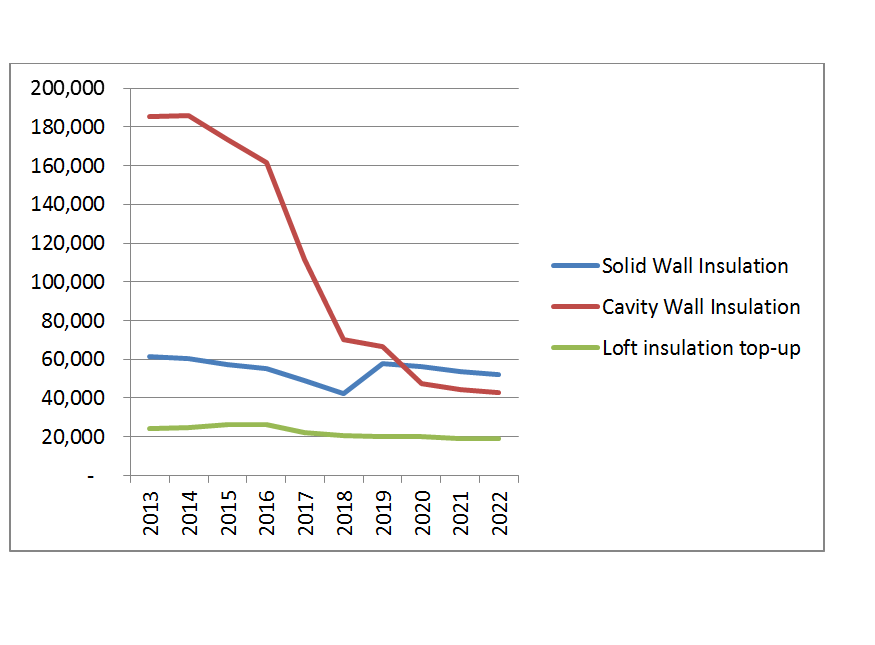 However, there are three threats to these potential benefits from the regulation. Firstly, it’s too slow to come into force. 2018 is two years after the date by which the government has a legal obligation under the Warm Homes & Energy Conservation Act 2000 to end fuel poverty. The independent Committee on Climate Change and the Fuel Poverty Advisory Group have both called for the date to come forward.

The legislation also contains a significant loophole which could considerably reduce its effectiveness by allowing a landlord with a dangerously cold F or G rated property to continue to let it legally as long as they have made improvements, taken out a Green Deal or benefited from the Energy Company Obligation. The possible presence of both legal and illegal F and G rated properties on the rental market will prove an enforcement nightmare for local authorities. It will also leave landlords confused about what they have to do to comply with the law. Ironically, for a government that talks so much about the importance of simple and transparent regulation, this is much more complicated and opaque than simply saying F and G rated properties cannot be let at that level once the regulations come into force.

Meanwhile landlords will also not act in anticipation of the regulations, as DECC predicts, if the details are still unknown. Friends of the Earth has joined with landlords organisations, tenants and consumer groups to call on DECC to write the secondary legislation before the Green Deal comes into force this autumn. Otherwise, we risk landlords delaying action until the detail is clear.

The Impact Assessment for the Energy Act 2011 states that:

“In a sector that is predominantly high turnover the Green Deal on its own is unlikely to exploit all cost-effective energy-efficiency improvements in the PRS… While it is the regulation in the PRS that would be expected to drive take-up in the sector, the presence of the Green Deal finance is required to make the take-up possible.”

So, the Green Deal is needed as a means of financing improvements, but it will not alone drive the take up of those measures. The government already accepts that the Green Deal won’t, however, be able to finance improvements to fuel poor households, but following cuts to Warm Front grants the ring-fenced funding for fuel poverty from the Energy Company Obligation – just £330 million annually – is totally inadequate. This could be boosted with the addition of future treasury revenue from two carbon taxes (the European Emissions Trading Scheme and the Carbon Floor Price).

It is the combination of the minimum standard regulations and appropriate financing mechanisms – be that the Green Deal, Energy Company Obligation or something else – which will drive change in the private rented sector.

Given the dire expectations of the Green Deal in the overall housing sector, with loft and cavity wall installation rates expected to drop off a cliff, it is time that the government send a similar long-term signal to owner occupiers and the social housing sector that properties will have to improve their energy efficiency or meet a certain standard.

There are hopeful signs. Over in communities and local government, Lib Dem minister Andrew Stunnell is consulting on ‘consequential works’, regulations which will mean anyone wanting to do a major renovation such as a loft conversion or extension will have to carry out energy efficiency improvements to the rest of the property. It’s an excellent proposal which Labour twice backed away from while in government.

There is nothing shameful in accepting that households might need help beyond the Green Deal to realise the huge benefits of greater energy efficiency. What matters most to families right now is whether the government is committed to taking the action necessary to help them cut their energy bills rather than whether it has stuck to an arbitrary and ideological position on regulation. Having taken a positive step in the Energy Act, how government proceeds on implementing the private rented sector legislation and on Consequential Works will show whether the reality will be more pragmatic and sensible than the ministerial rhetoric might suggest.

Note: This article was written before the recent explosion of indignation from the right-wing media over the so-called ‘conservatory tax’, which is not a tax and won’t apply to most conservatories.

Though denounced as “bonkers” by Downing Street sources, in fact a nearly identical consequential works policy to the one proposed by Andrew Stunnell has been running quite happily since 2005 in Tory controlled Uttlesford District Council in Essex . They say they have never had a compliant about it! And a recent report by the Energy Saving Trust found: “Of households planning refurbishment projects, 85 per cent expressed willingness to stretch their refurbishment budget to pay for some energy-efficiency measures.”

Dave Timms is Climate and Energy Campaigner at Friends of the Earth. He recently led its successful campaign for the introduction of a minimum legal energy efficiency standard for private rented homes. Dave has worked on various aspects of energy policy in his seven years with Friends of the Earth and in 2009 received the “Advocate” award at the British Renewable Energy Awards for his campaigning to introduce the UK’s feed-in tariff.

The costs of the UK storms and floods in context