Through a series of experiments, Daniel Sgroi and colleagues examine the relationship between happiness and productivity. They find that a shock to wellbeing, whether short-run and minor or long-run and significant, definitely has effects and these effects are positive and pronounced. While there may be other routes, the effect of a wellbeing shock on focus and worrying is one feasible story of the transmission mechanism that is consistent with their results. In light of their findings, and although how this translates to policy is still quite speculative, it would seem reasonable for management to instigate any measures that are relatively low cost that raise worker happiness.

In a series of experiments involving over 550 subjects conducted over the last few years at the University of Warwick my co-authors (Andrew Oswald and Eugenio Proto) and I attempted to examine the relationship between happiness and productivity. There are a number of key questions anyone interested in this topic might want to ask:

While we do not provide definitive answers to all these questions, we go some way towards making a start. In what follows I will first summarise our key findings here before going on to add some detail about our methods.

How does happiness affect productivity?

Our results show that a shock to wellbeing, whether short-run and minor or long-run and significant, definitely has effects and these effects are positive and pronounced. To give two very different sorts of shocks we examined in our experiments, watching 10 minutes of comedy boosts productivity for at least the hour following, and the loss of a close family member hurts productivity for several years. The sort of shocks we see in real life are normally somewhere in between the trivial and the dramatic and it would be hard to argue that these intermediate shocks (getting a pay rise, moving to a nicer office, a rise in “status” at work or enjoying a new hobby at home) would not also have effects. It then seems reasonable to conclude any shock that has a discernible impact on subjective wellbeing (which can be picked up in a happiness or life satisfaction question) is likely to have an impact on productivity in the workplace.

Figure 1: How those “treated” to a comedy clip perform compared to those who are “untreated” 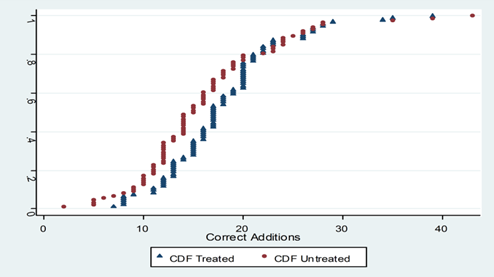 Figure 1 provides a graphical illustration of the nature of the effect. Anyone “treated” to a comedy clip performs significantly better at the additions task and the impact occurs throughout the distribution of ability: it is not just those at the bottom or top that feel the benefit of a boost to happiness, it is everyone.

When we think about how this works or what this means, things become a little less certain. There are many transmission mechanisms that might be important. To give an example, think about the worrying that goes on in everyone’s life, whether at home or at work. This is bound to distract us from the task at hand. If that worrying could be lessened (or compensated for) then it might be that we could focus more on any work-related tasks we might face. This could explain why shocks to happiness, from whatever direction, can impact on seemingly unrelated work-tasks. In our own study the productivity task involved adding up a series of numbers – in each case we provided 5 2-digit numbers and asked subjects to add them up correctly in order to be paid a piece-rate. They had 10 minutes to add up as many different sums as possible. Consider for instance:

This clearly has little to do with witnessing a comedy clip or having a close-family member suffer death or severe illness, but we found a consistent effect on our subjects’ ability to get calculations of this sort right under time-pressure at lower levels of reported happiness. Of course the route to productivity might go through something other than focus and worrying, but this is one feasible story that is consistent with our results.

How this translates to policy is even more speculative. We are working on greater external validity now (making the shocks to happiness map more closely with what might actually happen in the workplace) but given our existing findings it would seem reasonable for management to instigate any measures that are relatively low cost (in terms of time and money) that raise worker happiness. The key to evaluating each measure is likely to be sensible cost-benefit analysis, but certainly relatively cheap schemes (nicer surroundings, happy faces, more approachable management, etc.) are likely to be good choices. Organising outings, making games available to workers in their breaks, are probably sensible too as long as the costs are low.

One secondary but important consideration is the issue of raising expectations. In our short-run experiments the wellbeing boosts were generated through “shocks”, whereas if they had been expected it is hard to see the effects being so strong. Everything we know about habituation and hedonic adaptation tells us that to generate very long-run benefits requires something a bit more significant, along the lines of our own study on bereavement. Boosting longer-run happiness may therefore be at or beyond the limits of what sensible management can hope to achieve, or the cost may outweigh the productivity benefits.

How we conducted our research

Our research has covered a variety of different designs, but a typical session might go as follows:

Everything is anonymous, and across all the variations to this design we have around 500 subjects, and this is rising all the time. For the experiments that examined the role of longer-run real-life shocks we have something more like the following:

By asking about a real-life shock at the end and reported happiness at the start we can avoid contamination (sometimes being asked about a family death will generate a fall in happiness and we are not so much interested in the impact of being asked, but rather the background effect of the shock itself).

Then we can use either style of experiment to reveal to us how those who benefited from the comedy clip (or suffered from a bereavement) vary in happiness and then how they in turn perform in the additions task compared to those who did not, and we have enough data to allow us to control for demographics (gender, age, mathematical ability, school-level results and the IQ test) to see what sort of person is most affected by happiness shocks.

Psychologists have long seen the link from happiness (mood, or what they call “positive affect”) to creativity. However, until our own study there has been very little research into the link between happiness and productivity in simple paid piece-rate tasks, reminiscent of what we might see in the work-place. We find that happiness is good for productivity in the short-run and long-run, whether induced by the experimenter or by nature. It works largely through an increase in effort, it is not gender-specific and seems to work throughout the entire distribution of ability. However, despite the progress that has been made there is still much to be done. We need to understand better the mechanism that translates happiness into productivity and ultimately we need to translate these findings into sensible policies in the workplace.

Dr Daniel Sgroi was an undergraduate at Cambridge University, and then after a year as a consultant, moved to Nuffield College in Oxford University where he received his masters and doctorate. His first academic position was as a Junior Research Fellow at Churchill College, Cambridge, and he later become a Senior Research Associate at the Department of Applied Economics in Cambridge. He moved to the Economics Department at the University of Warwick in 2007 where he is now an Associate Professor. His research has two major strands. He has a strong interest in economic theory particular in the areas of industrial organization, herding behaviour and game theory. He also works on more applied topics in behavioural and experimental economics with a special interest in learning, cognitive biases and the relationship between mood and behaviour.