Since David Cameron announced his intention to measure the country’s happiness in 2010 there has been a flurry of debate about whether happiness is something that can or should be measured. Robert Battison examines the Office of National Statistics’ latest exercise in finding objective measurements for happiness, and suggests that simply asking people whether they are happy or not might be the most accurate measurement around.

A new science of happiness has emerged in recent decades; organisations have emerged to promote its pursuit, and even the Government has bowed to the pressure, spending millions on the question of whether we can do more to increase it. The logic says that if we can measure negative emotions such as depression, then so too must we be able to measure the positive emotions. And indeed such measurements, if they can be ascertained, are far better than GDP to determine a country’s or Government’s success. After all GDP is about money and productivity, which we supposedly pursue only in order to raise our well-being. But if all of this is true, why does the general public seem so unenthused about measuring happiness?

In part this lack of enthusiasm may be because the subject is about methods rather than results. But it may also be down to scepticism about our ability to objectively measure happiness or well-being. In order to dispel this scepticism the Office for National Statistics (ONS) has been developing new measures of well-being. We know that subjective measures of well-being are affected by cognitive biases. Labour voters, for example, might be inclined to say they are unhappy if they know the results will be understood to reflect the performance of a Conservative government, and vice versa. Thus it makes sense for the ONS to try and find some objective measures. In its report on Measuring National Wellbeing well-being is described as the following:

“As we define it, well-being includes both subjective and objective measures. It includes feelings of happiness and other aspects of subjective well-being, such as feeling that one’s activities are worthwhile, or being satisfied with family relationships. It also includes aspects of well-being which can be measured by more objective approaches, such as life expectancy and educational achievements.”

These measures may be useful in measuring the wellbeing of many people, but not all. The problem with objective measures is, as Michael Argyle argues, that lists of objective indicators for well-being appear to be very arbitrary. For instance in 1991 Britain adopted a different list of fourteen objective indicators for wellbeing, which included factors such as clean rivers and the number of surviving species of birds.

Indeed the ONS admitted the arbitrary nature of these measures when it stated:

“Little is known about what really matters to individuals, when assessing first their own lives, and the country as a whole”.

If this is true it seems unlikely that any debate or randomised sampling will enable us to find out objective measures that can be used for more than sixty million people. I could be proved wrong, and find that everyone really covets the same sets of things, like educational achievements and a long life expectancy. But what evidence exists seems to suggest the opposite; that if happiness is subjective then so too is well-being. And if that’s true then millions of pounds of taxpayer’s money is being spent measuring things that raise the well-being of some more than others.

The money is not entirely a waste, but what the new science of happiness has shown over the past twenty years is that simply asking people about their wellbeing may be the best way forward. Trusting people to be truthful when they say how happy they are not only saves money, but has also been shown to be scientifically recommendable. Abdel-Khalek is one of a great number of scholars who argues that “measuring happiness by a single item is reliable, valid, and viable in community surveys as well as in cross-cultural comparisons”. 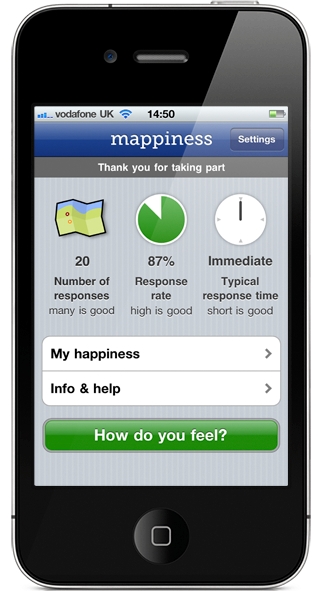 The LSE’s Mappiness study is one great example of how happiness can be measured by asking people directly. Technically it’s an Experience Sampling Method study; a research methodology developed in the 1980s to ask participants to make notes of their experiences in real time throughout the day. However this study is different, and is already yielding much more rigorous results than those gained by the ONS. For users, it’s simple, freely available to all, and has great prospects for future growth. For those looking to use this data it’s based on extensive research, has thousands of users, uses modern technology, and focuses on how happiness can be affected by specific local environmental factors. Watch this video for a short overview.

This study is a successful example from among hundreds asking people how happy they are. And each of these subjective measurements give results that accord with how happy friends and family members say that person is, their subjective recalls of positive and negative events in their life, reports from clinical experts, stress responses such as heart rate and blood pressure, and various other factors. There are still obvious limitations to simply asking people outright. But it is this research that the ONS needs to pay closer attention to, for if we are to realise the dream of raising stagnant levels of well-being we must first recognise that everyone is different.

Happiness research draws our attention to both structure and agency