Steve Gibbons argues that the evidence indicates positive results when introducing competition between NHS hospitals, in terms of improving overall efficiency and increasing choice for consumers at lower costs. However, the results are less positive when private hospitals are allowed to compete with NHS providers, and safeguards may be necessary.

Last year, my research with Zack Cooper on hospital competition generated a lot of interest. In that work we found that reforms in 2006, which allowed patients to choose between NHS hospitals for routine surgery, had knock-on effects on outcomes in emergency care – lower heart attack mortality rates specifically. A lot of people – those with distaste for the very idea of competition in public services – did not like this finding at all and the arguments ran for some time in the medical press.

Our latest research is more of a crowd pleaser, with something for everyone, both those who support and those who oppose greater choice and competition in the NHS system. In fact, there are headlines drawing on our newest research that spin the message either way.

So what does this new research really show? This time, building on our previous work, we look at the effects of the same policy change in 2006 on patient ‘length of stay’, which is a common indicator of a hospital’s efficiency. Length of stay has been declining over the past decade as surgical and preparative technology and practice improves, and as hospitals have tried to decrease theatre turnaround time, increase patient turnover, utilise resources efficiently and reduce waiting times.

The choice policy change in 2006 allowed patients to choose any hospital offering the surgery that they required. This was a nation-wide change, but had more ‘bite’ in places where choice was feasible and facilitated by the local hospital geography than in places where choice was infeasible or impeded. We use these differences to trace out the effects of the policy change on length of stay, by comparing reductions in average length of stay for patients in places of high potential choice with the reductions in places of low potential choice. 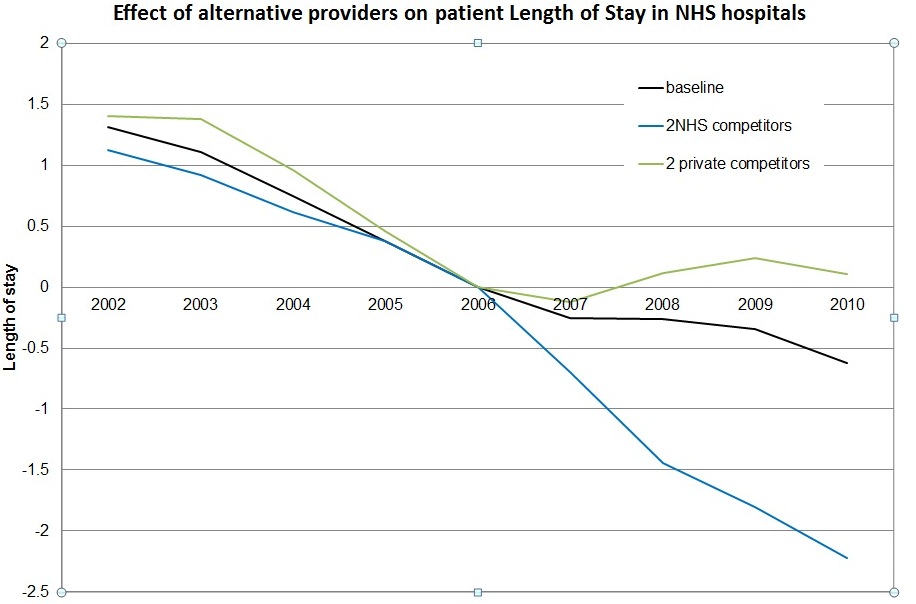 Just as we found that the switch to a more competitive market structure in 2006 amongst NHS hospitals was associated with reductions in heart attack mortality rates, we find it also led to shorter length of stay for routine operations like hip replacements, cataract and hernia operations. Average length of stay went down more in those places with a lot of potential choice than in places with few potential choices. This was true both for the time spent in hospital after an operation, and for the time spent in hospital waiting for an operation to happen.

But is a shorter length of stay a good thing? Certainly it is a hospital management target, and reduces costs, but is it good for patients? If hospitals discharge patients ‘quicker but sicker’ after surgery in their haste to free up beds, then it is clearly not. But a less ambiguous case can be made for the benefits of reducing the time a patient spends in hospital before their operation, especially for routine operations of the type we consider. Preparation for these kinds of operations now takes place in pre-operative clinics attended before a patient is admitted, specifically to avoid costly delays due to unforeseen complications. The aim is to get patients in surgery on their day of admission to hospital. And our evidence indeed shows that same-day operations became more likely after 2006 in the more competitive markets relative to the uncompetitive markets. This is good news for proponents of competition. There are implied cost savings of around 6 per cent from these length of stay changes, which is a non-trivial amount when scaled up to the NHS as a whole.

So does this mean that private competition is bad for the NHS and is competition beneficial or detrimental overall? This is hard to say from this evidence alone. The main message is that choice and competition amongst NHS public providers seems to have generated some positive incentives and has been a force for improvement. Yet, if private hospitals are to compete with NHS providers under a reformed NHS, safeguards need to be in place to ensure that NHS hospitals are properly compensated for the more risky and challenging mix of cases they could end up treating.