The coalition government has taken great pains to assure the public that the NHS budget will be ‘ring-fenced’, and thus not subject to the cuts of 20 to 40 per cent forecast for other Whitehall departments. At the same time, the NHS still faces (another) restructuring and the need to make significant savings. Zack Cooper considers how recent LSE Health research shows ways forward for the NHS to do more with less in the coming years.

The recent, historically high levels of NHS spending are going to come back down to earth. Despite Andrew Lansley’s pledges that NHS funding will increase in real terms going forward, no one has any illusions that the health service is going to be exempted from significant financial pressure.  Unfortunately, there are only two ways to reduce how much we spend on healthcare: either cut services or become more efficient. Clearly, the latter strategy is more appealing than the former.

Improvements in efficiency do not need to come at the expense of quality or the patient experience, however. Improvements in efficiency will also flow from smarter incentives in the NHS. This is precisely why the government has said that it will continue to press ahead with its reforms of the NHS, including expanding patient choice and hospital competition. Ministers need to stick to this idea, not because they are wedded to market principles, but rather because the reforms and the incentives their Labour predecessors have created are working and could work better in future.

In research we recently completed, we found that patient choice and competition in the English NHS – policies championed by Tony Blair – have led to measurable and significant improvements in hospital efficiency.  This is very good news for the current government.  It illustrates that with smart reforms and smart policies, there is no inevitable reason why the NHS across the UK should need to resort to cuts to services like rationing cancer drugs, increasing waiting times or scaling back what the NHS covers.  The question now is whether the new Coalition Government is willing to continue to press ahead with successful reforms passed by their predecessors or instead, if they will succumb to political pressure and feel the need to start anew.

In our recent LSE Health study Does Hospital Competition Improve Efficiency?, we looked at the amount of time NHS patients spent in hospital when they had a hip replacement performed in the England between 2002 and 2008.  Each additional day that a patient stays in the hospital costs the NHS about £500. So we wanted to investigate whether those hospitals facing greater competition after the new choice policies came into force did a better job of getting patients out of the hospital more quickly.

Traditionally, a person who has a hip replacement spends about a week in the hospital – and over 90 per cent of that time occurs after they had a surgery, when after a big operation like a hip replacement, patients need time to recover. There is not much that a hospital can do to speed up this recovery phase or get patients out more quickly.  In fact, if a hospital discharges a patient too early, there’s a risk that the patients will end up needing to return to the hospital, costing the health service more in the long run.

Interestingly though, from January 2006 hospitals faced more significant competition after the Labour government’s reforms. Hence, in areas where there are a lot of hospitals fairly close together (like London and the big cities), it would make sense for hospitals to take steps to shorten the pre-surgery time that hip patients spent in the hospital. By contrast, in areas where hospitals are few and scattered the local hospital is not exposed to such competitive pressures, and hence has no incentive to reduce the amount of time hip patients spent in hospital before surgery.

So what actually happened? The chart below shows that across all hospitals the previously slow rate of decrease in pre-surgery time in hospital fell much more sharply after 2005 (in anticipation of the new measures coming in). But interestingly also this efficiency improvement was much greater over time in the hospitals exposed to most competition, and was least in the hospitals exposed to least competition. 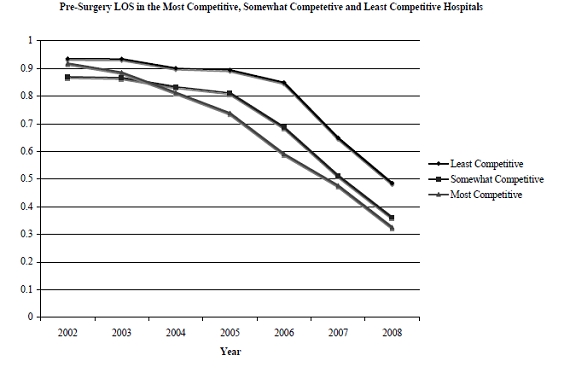 ‘Market-based’ reforms inside the National Health Service have certainly proved controversial over recent decades, reflecting real worries that competition pressures may in some way erode a primary focus on doing what’s best for patients themselves. Yet almost every shred of empirical evidence looking at the impact of patient choice and hospital competition in the NHS from 2006 onwards has found that it has improved quality and increased efficiency.

As the new government carefully considers how to improve health service efficiency in a period of public austerity, ministers and NHS decision-makers need to take a serious look at the record of successes flowing from already-existing market-based reforms. Properly designed changes to promote patient choice and enhance hospital competition can work well and deliver further efficiency gains.

Austerity will lead to further government outsourcing, but key lessons need to be learnt to avoid the mistakes of the past