There are significant changes to the welfare system now on the cards from the new coalition government, and the pension system is not exempt. Leandro Carrera examines these changes in detail and looks at how the state and public sector pensions might be affected in the years to come.

Last Thursday, the government announced plans to scrap the default retirement age of 65 by 2011. These plans and other intended changes to our pensions system have raised controversy with some claiming that people will be forced to “work until they drop.” The public sector now faces an period of fiscal austerity and cut. This, combined with the demographic changes of an aging population means that pension systems must be adjusted to reflect these changes. These adjustments are occurring in countries all over the industrialised and industrialising world in order to guarantee the financial sustainability of their pension systems.

In the UK alone, if the retirement age is not raised, in future years we will have a shrinking number of workers compared to retirees. In a previous post I noted that in 1960 there were 4 workers for every person aged 65 and over, in 2050 that ratio will be close to 2 to 1. Add to this that when the current basic state pension was introduced after the war, life expectancy was around 70 years. This meant that those that reached the retirement age of 65 (men) and 60 (women) would receive a pension for around 5 to 10 years. Currently, life expectancy at birth is reaching 80 years, which means that people are receiving a pension, on average, for around 15 years. So increasing the retirement age at 66 by 2016 will only start to partially correct for this.

It’s important to note that the pension system in the UK is currently composed of three main pillars:

The first pillar is the Basic State Pension. This is a flat rate benefit paid by the state to every worker reaching the minimum retirement age. The State Pension is funded by general taxation and entitlement depends on the number of full National Insurance Contributions years paid. From 2010, workers need 30 years to qualify for a full BSP, which is currently at £97.65 per week.

The third pillar is represented by pensioners’ individual savings.

As a snapshot of the current situation, the table below shows the average yearly income obtained by a typical retiree under 75 years of age. The figures assume full State Pension entitlement and to this are added other benefits such as widow’s pension and widowed parent’s allowance, income related benefits (pension credit, housing benefit, council tax benefit and social fund grants, tax credits), disability benefits, winter fuel payments and carer’s allowance. 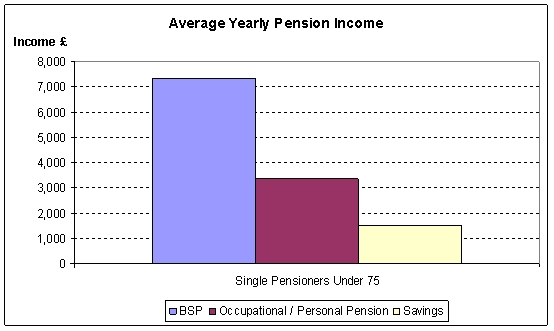 Source: The Pensioners’ Incomes Series 2006/07, Department for Work and Pensions

The chart shows that the Basic State Pension (plus the benefits described above) represent around 60 per cent of income. Therefore, changes to this pillar are likely to have a significant consequence for the income of current and future retirees.

What are the changes currently being proposed and applied and how they will change pensions?

The government has set up an Independent Pension Commission chaired by former Labour minister John Hutton that is to issue an interim report with recommendations for changes to public service pension schemes by September 2010 and a full report in time for the 2011 Budget. In addition, the government has unveiled proposals for changes to the basic state pension and for individual public pension schemes in the last two months.

Changes to the Basic State Pension:

Linking pensions to earnings: this link which updated pensions every year was scrapped during the Thatcher government. The new method will consist of increasing the State Pension by average wage increases, prices, or a 2.5 per cent increase, whichever is higher. There is an important caveat here: the price index to be considered will be the Consumer Price Index (CPI) and not the Retail Price Index (RPI) as was the case in the past. As the graph below shows the RPI has been consistently above the CPI over the years. This is because the CPI does not include taxation and most housing costs. The chart shows that in last twenty years (for which data on both the RPI and CPI are available) CPI linking would lead to a 25 per cent gap compared to the use of the RPI. 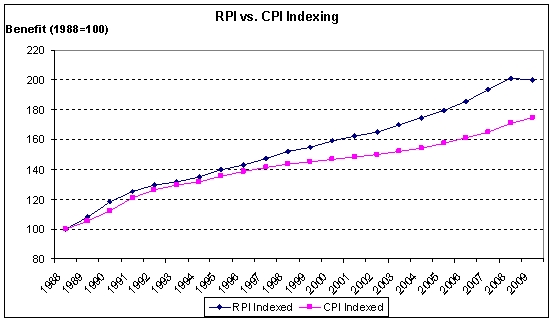 The government has also unveiled plans to scrap the default retirement age of 65. This is the age at which public and private employees can be forced to retire. This recommendation points towards promoting more flexible retirement options and encouraging people to work more year, which we have endorsed in previous posts.

Even though the government will wait for the recommendations of the Independent Pensions Committee to apply a broader range of changes to specific schemes, it has already stated that it plans to implement some measures similar to those proposed for the Basic State Pension. Among them, the most important is the link of benefits to RPI rather than CPI. The government has proposed that this change should also be adopted by private occupational pension schemes. As stated above, the switch from RPI to CPI can seriously impact the adequacy of pension benefits, that is whether the benefit paid is sufficient to cover the needs of retirees. In fact, some private sector pension experts have already pointed out that while the indexing switch may represent a good news for employers who will see the cost of providing pensions drop overnight, it will be bad news for pensioners who may lag the “real” cost of living represented by the RPI.

In addition to these changes, some public and third-sector schemes have already started consultations to implement further changes:

The pension fund trustees have initiated a 90 days consultation period on the possible changes to the scheme. Under current arrangements employers get a defined benefit (DB) pension that is based on final salary levels for those who joined before 2006 and on a career average for those who joined after. The changes currently proposed are the following:

Under current arrangements, Members of Parliament receive a defined benefit (DB) pension based on final salary levels. Last week a report was published by the Review Body on Senior Salaries. Given the deterioration of the funding structure of the scheme, the report recommended the following changes:

This is the scheme for academics and universities’ senior administrative staff. Currently, the scheme pays a defined benefit (DB) pension based on final salary levels. The scheme has some generous provisions such as early retirement from age 55 although on a lower benefit. On 22nd July the Board approved a series of changes that will be put up for consultation from September to December. The proposed changes are the following:

In sum, this brief overview of the changes proposed to the Basic State Pension and to some public sector occupational schemes shows that many of the measures currently being debated are in line with the ones anticipated in my previous post. Most of these changes are in line with trying to adjust the cost of providing pensions to the fact that we are living longer. However, the focus of the government should not only be on the financial side but also on the adequacy of the benefits provided. As the example of the change from RPI to CPI indexing shows, an unintended consequence of all these reforms is that the financial sustainability of pension schemes may be safeguarded at the cost of providing an insufficient benefit to future retirees.

The NHS is at a crossroads after the Francis Report