Does it matter to voters if a candidate was born in the same region as the constituency they are contesting? Using this definition of ‘localness’, and with data from elections in 2014 and 2015, Rob Gandy presents evidence in support of the argument that localism is on the rise.

The League of Gentlemen’s question ‘Are you local?’ will chime with British politicians, as voters view being from the local area as important. Often party members are at loggerheads with their headquarters, particularly when outsiders are perceived to be ‘parachuted’ into safe seats, as with the 2012 Rotherham by-election when Labour members felt their shortlist did not include a local candidate. The accusation was even levelled at Labour’s Liverpool-born Dan Carden when chosen to stand for Liverpool Walton in 2017.

This issue is complex and dependent on the definition of ‘local’ used. A valid and practical high-level proxy for localism, is the relationship between elected politicians’ birthplace and their constituency, with politicians deemed local if they represent a constituency in their region of birth. This reflects MEP constituencies being regional, as the issue equally applies to EU elections.

Analyses of the respective 2009 and 2010 elections found that London, North East England, Northern Ireland, Scotland and Wales had the highest number of MPs and MEPs born per head of population, with the latter four also having the most local politicians (see Figures 1 & 2). The greatest mobility was in south-east England, particularly London, but nationwide the vast majority of MPs and MEPs were local or represented constituencies in regions adjacent to that of their birth. The latter is important because a politician can represent a constituency local to them personally, but just over a regional border.

Figure 1: Comparison of regional variations from mean national population rates (per million) for MPs and MEPs (2014/2015) 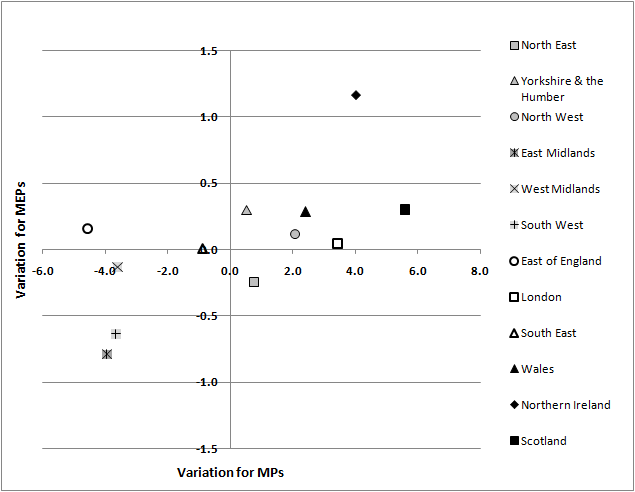 Figure 2: Comparing mobility for MPs and MEPs at their respective sets of elections 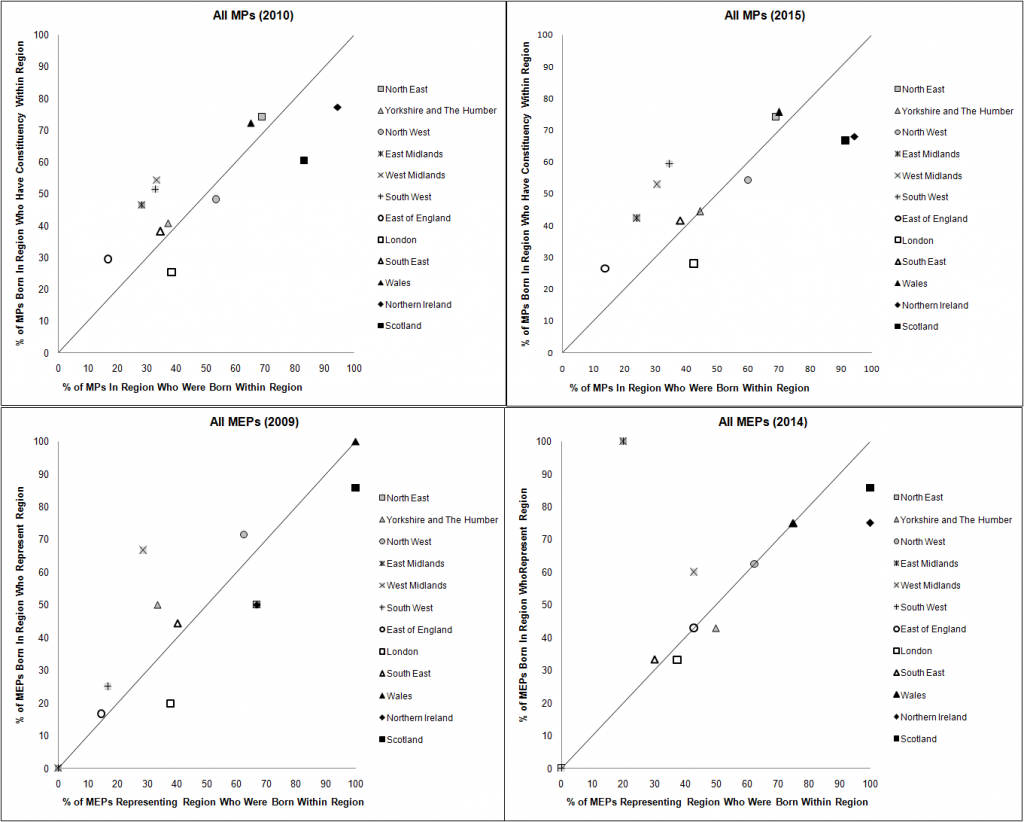 The respective 2014 and 2015 elections saw similar patterns, but with some fluctuations amongst the English regions. The number of MPs/MEPs born in each UK region per million population ranged from 5.8 for the East Midlands to 16.5 for Scotland, with a mean of 10.6 (excluding 41 Non-UK MPs/MEPs). The percentage of MPs elected within their region of birth in 2015 was 47% (up from 44%), increasing to 74% if adjacent regions are included; MPs crossing more than one region was down nearly a point to 26%. The corresponding figures for MEPs in 2014 were 45%, 84%, and 22% respectively, similarly showing increased localism.

Local politicians accounted for 40% of re-elected MPs, compared to 71% of new MPs where the party changed. However, where new MPs replaced the incumbent and the party retained the seat, the figure was 56%. Of those MPs who left the UK parliament 53% were local. The patterns for MEPs showed some differences, with a much lower percentage of those leaving the EU Parliament being local and a much higher percentage having crossed more than one regional boundary (44%).

The percentage of local MPs for Labour (51%) was much greater than for the Conservatives (35%), despite its major losses of Scottish seats. Seats considered safe at the 2010 general election, saw local MPs representing only 17% of the Conservatives’ top 100 safest seats and 22% for their top 150 seats. By contrast, 45% of all other Conservative seats involved a local politician. The respective figures for Labour were 58%, 54%, and 47%.

The Labour Party had greater female representation that the Conservatives, and a greater proportion of these were local: 51% compared to 38%. Notably, 37% of female Conservative MPs had to cross more than one regional boundary, compared to 27% for Labour and 13% for all other parties. Interestingly, of new Conservative MPs who crossed more than one regional boundary or were non-UK, there was an equal split between males and females (11:11), whereas for new Labour MPs the split was (1:13). Whether the latter was a result of all female shortlists or parachuting candidates by the Labour Party, or a combination of the two, is open to speculation.

There can be little doubt that the creation of Mayors for the major English provincial conurbations has heightened the debate about the distribution of resources to these areas compared to London and the devolved governments in Northern Ireland, Scotland, and Wales. And it would be interesting to research how MPs born in the capital and celtic countries, who represent constituencies in other parts of the country, voted on matters relating to their birthplaces. As the old saying goes: “You can take the boy out of Scotland but you can’t take Scotland out of the boy”.

Also, might the recent Boundary Commission’s recommendations to reduce MP numbers to 600 act as a further stimulus to localism, and regionalism in England, by necessitating candidate selection processes for new constituencies? Neighbouring MPs from the same party could be pitted against one another, possibly prompting older MPs to retire. Whichever candidate is most local will undoubtedly be a factor in how party members vote. Of course, there was another general election in 2017, with 105 new MPs compared to 2017. How ‘local’ are they? Is there accelerating localism? Watch this space….

Note: the above draws on the author’s work published in Political Insight.