How much of a change would the Alternative Vote really be?

How much of a change would the Alternative Vote really be?

Nick Clegg’s political difficulties have recently worsened over the rushed effort to get the AV referendum accomplished by May 2011. Anthony Wells reads the runes on what voters think of the change at present and who would benefit if the Alternative Vote survives its key test.

The referendum on voting next year is shaping up to be one of the key tests for the new government. There has already been much discussion on voting reform on this blog, elsewhere, and the reform has had some pre-legislative scrutiny at the select committee. Meanwhile Labour has pledged to oppose the referendum bill, although it backs AV itself.

Current polls show a narrow lead for AV when people are asked how they would vote in the referendum. But there is also little public awareness of what the new system would mean and there are still a high proportion of don’t knows. So recent polls are not necessarily a good indicator of how public opinion will stand when the referendum arrives.

Predictably, Lib Dem supporters are most in favour of AV, Conservatives are most against, and Labour voters narrowly in favour. But, when respondents to a YouGov poll were first presented with pro- and anti- AV arguments, and then asked how they would vote, there was a clear movement of support from AV to don’t know. Labour voters are most likely to switch, asked after being presented with pro- and anti arguments they move to being narrowly against AV:

These referendum voting intentions of course depend upon how accurately the pro and anti arguments presented to respondents reflect the actual debates that will happen during the referendum campaign. I suspect a major factor that has not been explored yet is whether the change is something that is perceived to help the Labour party, the Conservatives or the Liberal Democrats. If the perception by next May is that AV is something that will help the Conservatives, rather than helping Labour as has traditionally been expected, I would expect Labour supporters to turn against it, and opposition to it amongst Conservative supporters to soften.

On that subject, past studies have tended to show that AV would have helped the Liberal Democrats and Labour at the expense of the Conservatives. This was backed up at the 2010 election, when YouGov polling showed that Lib Dem voters’s second preferences would have split in the Labour party’s favour, and that Labour voters were far more likely to give their second preferences to the Liberal Democrats than Conservative voters were.

How people would have voted using AV at the LAST election 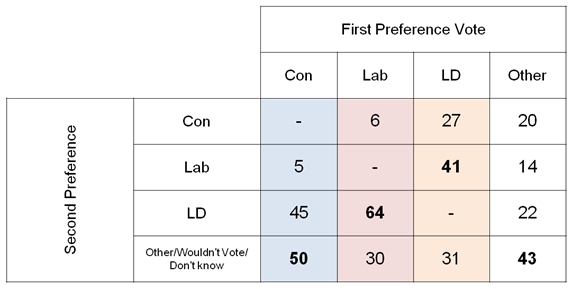 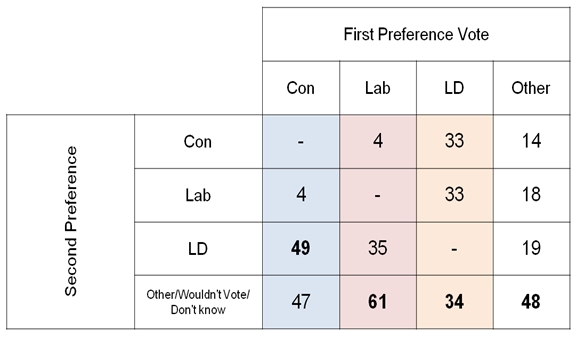 Translating this into seats, we would have the following results:

All predictions of what would happen under AV though are quite speculative at present. People will not have thought through their second preferences yet, and while current polls don’t reflect it, it is possible some may use AV to give first preferences to smaller parties. Neither do we know if there are regional or battleground differences in second preferences, nor how people would use 3rd or 4th preferences, nor what the Scottish and Welsh patterns would be. Exactly how pollsters measure voting intention for AV elections and predict election results based on that is a challenge that we’d need to face after a yes vote.