When academics influence policy, attribution from commentators and policymakers can be relatively rare. Professor Luis Garicano was therefore delighted when Martin Wolf of the Financial Times recently judged that last week’s announcement that the European Central Bank will alter the way it intervenes in bond markets owed much of its intellectual paternity to years of research and commentary by the LSE’s Professor Paul de Grauwe.

In one of his most felicitous quotes (and the one we economists like to tell ourselves in our black dog moments) Keynes argued: “The ideas of economists and political philosophers, both when they are right and when they are wrong, are more powerful than is commonly understood. Indeed the world is ruled by little else. Practical men, who believe themselves to be quite exempt from any intellectual influence, are usually the slaves of some defunct economist.”

The momentous choice by the ECB to radically alter the way it intervenes in bond markets is a case in point.

Last week’s decision by the ECB to begin intervening in an unlimited but conditional way on the bond markets of member countries in the Eurozone is already having massive consequences. Bond premia have descended by hundreds of basis points, companies all through the Eurozone’s periphery are finding financing to make investments and hire employees they could not have otherwise found. The decision is not sufficient but no one can doubt that it is very important.

Commenting on this decision, the main OpEd writer of the Financial Times, Martin Wolf, adjudicated its intellectual paternity to Paul de Grauwe:

“This [the argument that “there is a case for intervening… to “break” these expectations which do not concern only the specific countries, but the euro area as a whole. And this would justify the intervention of the central bank”] then marks belated acceptance of strong arguments made by the Belgian economist, Paul de Grauwe, at the London School of Economics.”

The story of his criticism of the EMU design and structure goes back many years. For an easy to read sample, see this prescient Financial Times article by De Grauwe in 1998, from which I will quote a few paragraphs (recall, 1998):

“EMU is certainly going to dramatically increase the degree of capital mobility within the euro area. Today, it is still the case that European capital markets are relatively closed. Financial institutions and insurance companies in Germany, France, Italy, etc. hold an overwhelming share of their total portfolio (often more than 90%) in domestic assets. The complete elimination of foreign exchange risk following the introduction of the euro and the disappearance of regulatory constraints on the holdings of “foreign” euro assets will change all that, leading financial institutions to dramatically increase their holdings of “foreign” euro-assets. The result will be to open up financial markets in Europe in a more profound way than in the 1980s when most European countries eliminated their systems of capital controls. The size of the funds that will be freely moving within the euro area will make a quantum jump.

Against the background of this dramatic liberalisation of Europe’s financial markets there is the fact that the regulatory and institutional environment will not be adapted. Prudential control will still be done at the national level. This will handicap the regulators in assessing the risk of the institutions under their jurisdiction. In addition, financial institutions in each country of the euro area will, at least initially, overwhelmingly be national. The German financial markets will be dominated by German financial institutions, the French markets by French institutions, etc. Thus, institutionally the financial markets will still have a substantial domestic segmentation. This will make it difficult to efficiently spread the risk of asymmetric economic shocks, i.e. economic shocks occurring in one country and not in others.

The conditions that could lead to financial disturbances will, therefore, be present in the future euro area, at least during its initial phase when institutions have not yet adapted to the new environment. This, of course, does not mean that crises must inevitably occur. In order to gauge the risk of such occurrence let us analyse a particular scenario.

Suppose a country, which we arbitrarily call Spain, experiences a boom which is stronger than in the rest of the euro-area. As a result of the boom, output and prices grow faster in Spain than in the other euro-countries. This also leads to a real estate boom and a general asset inflation in Spain. Since the ECB looks at euro-wide data, it cannot do anything to restrain the booming conditions in Spain. In fact the existence of a monetary union is likely to intensify the asset inflation in Spain. Unhindered by exchange risk vast amounts of capital are attracted from the rest of the euro-area. Spanish banks that still dominate the Spanish markets, are pulled into the game and increase their lending. They are driven by the high rates of return produced by ever increasing Spanish asset prices, and by the fact that in a monetary union, they can borrow funds at the same interest rate as banks in Germany, France etc. After the boom comes the bust. Asset prices collapse, creating a crisis in the Spanish banking system.”

All of the problems identified have played a key role in the current crisis, up to the bubble in the “example” country. For his tireless criticism of the way the euro was being set up, De Grauwe was ostracized from the Monetary Policy making in Belgium. Now, Europe has started (probably too late) a turn around.

Sometimes we wonder about the value of our research—and here is one instance where, if Martin Wolf is right and Paul De Grauwe has shifted even by a few percentage points the probability that these ECB policies were adopted, the value of his research is probably in the billions of euros.

[The same page of Tuesday’s FT contains an article by John Kay using the research by Charles Goodhart (Professor of Finance at LSE) and Gwyn Bevan (head of the LSE’s Management Department) to elucidate why the Basel III approach to capital requirements is fundamentally flawed.]

Luis Garicano is Professor (Chair) of Economics and Strategy, Department of Management and Department of Economics, London School of Economics. He is also Head of the Managerial Economics and Strategy Group and Director of the MSc. Economics and Management at the School, a Research Fellow at the Centre for Economic Performance (CEP), LSE and at the Center for Economic Policy Research (CEPR), as well as a researcher at the Fundación de Estudios de Economía Aplicada in Madrid. Professor Garicano received his PhD in Economics from the University of Chicago, where he was as well an Assistant, Associate and Full Professor, and a visiting Professor at MIT and LBS His research interests are productivity growth, labour economics, corporate governance and incentives, firm knowledge and capabilities, and law and economics. He is founding editor of Nada Es Gratis, the most influencial economics blog in Spanish. 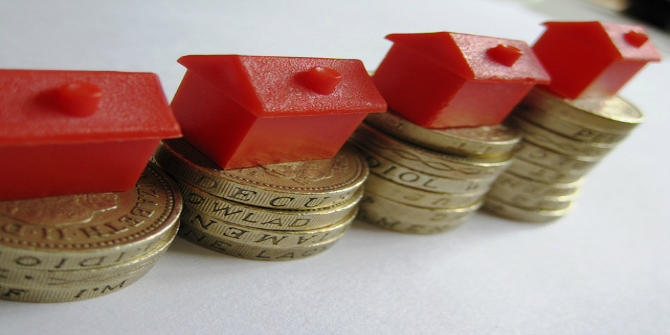 Reclaiming democracy in the square: Two years on from Occupy London