In this post, Chris Hanretty, Ben Lauderdale and Nick Vivyan investigate the predictive performance of the betting markets relative to their electionforecast.co.uk forecasting model.

The failure of the opinion polls to accurately estimate national vote share has led some to suggest (here, here) that we should instead look to betting markets as a way of eliciting information about election outcomes.

National betting markets performed better than national poll-based forecasts: although they implied that the most likely outcome was a hung parliament in which the Conservatives were the largest party, they implied a relatively high probability of a Conservative majority, which our model viewed as incredibly unlikely. However, it is hard to argue for either the superiority of betting-market-based or poll-based forecasts on the basis of a single electoral contest, and it is worth noting that betting markets in 2010 also implied a Conservative majority was  very possible .[1]

The odds available on outright-winner betting markets can be turned into probabilities of different events occurring (Wolfers and Zitzewitz 2006). Intuitively, as the odds rise above (fall below) the true probability of victory, well-informed bettors move in to back (lay) alternative candidates. Where (liquid) markets exist for a large number of contests, betting markets can in theory provide detailed information about election outcomes.

The purpose of this note is to test whether betting markets actually provided a more accurate guide to constituency-level outcomes than did the electionforecast.co.uk model, which was primarily based on opinion polls. Our forecasting model generated predicted probabilities of victory for each party in each seat. As such, these can be compared to the probabilities implied by constituency betting markets, which offered prices on each candidate in each mainland GB constituency.[3]

Our data on betting market prices on Betfair were downloaded from http://www.firstpastthepost.net/data/. The prices are taken from the last update at 5am on Thursday 7th May.

The forecast probabilities of victory for each candidate were taken from the electionforecast.co.uk update made public at 12 midnight on the 6th May. This was our penultimate forecast. This date was chosen to match as closely as possible the date of the betting data. Thus, although we posted a final forecast at 1pm on the Thursday of the election, we have chosen to take our forecast from the night before.

The most obvious and simplest check on the relative accuracy of betting markets and poll-based forecasts is to ask whether each method correctly predicted the winner in each seat. That is, did the candidate with the highest predicted probability win?

There are four seats where the market data gives a tie between two parties, for each of these we give half a correctly predicted seat if one of these two matches the correct seat outcome. We find that 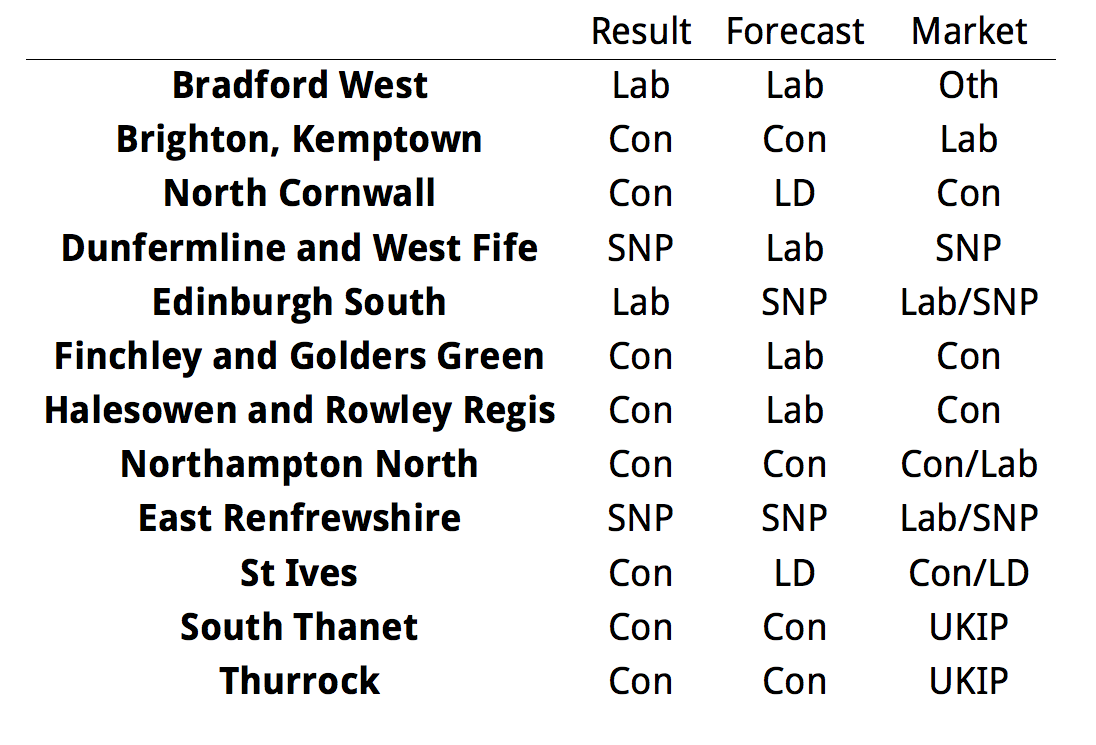 The percentage of seats correctly predicted is an easy-to-understand diagnostic, but it can be misleading. It may be that the betting markets were much more confident about the winning candidate in each seat, whereas our polling-based model was less confident, and assigned a lower probability of victory.

These scores are a sort of error rate in seat prediction, adjusted for the strength of the predictions. Thus if we multiply them by the number of seats, we get an adjusted seat error totals of:

Thus, when we account for the probabilistic nature of the forecasts and implied probabilities respectively, we find that betting markets do slightly better than our poll-based model.

Implied probabilities derived from betting market prices are known to be poorly calibrated. In particular, they over-estimate the probability that long-shots will win, and correspondingly under-estimate the probability that favourites will win. In our poll-based models, we allowed for the possibility that polls might be biased, insofar as they exaggerated change since the last election. It is therefore only fair to allow a correction for the favourite/longshot bias in betting markets.

With these “debiased” estimates, we can recalculate the Brier scores for the polling-based model probabilities and the debiased betting market probabilities. We find:

As before, we can transform this to an expected seats error:

Thus, when debiasing market-implied probabilities, we find that betting markets do better than a poll-based model, when based on Brier scores. The differences are still not very large.

The market-implied probabilities outperformed our forecast probabilities primarily because our model was over-confident in its predictions. In general, our model was more decisive than the markets for most seats. Since most seat predictions were correct for both the forecast and the market, this meant that in in 546 seats the model made a better prediction according the Brier scoring function, however the large penalties from errant and highly confident predictions in the remaining 86 seats have higher weight in the scoring function. This can be seen in Figures 1 (plotting candidates who won) and 2 (plotting candidates who lost). 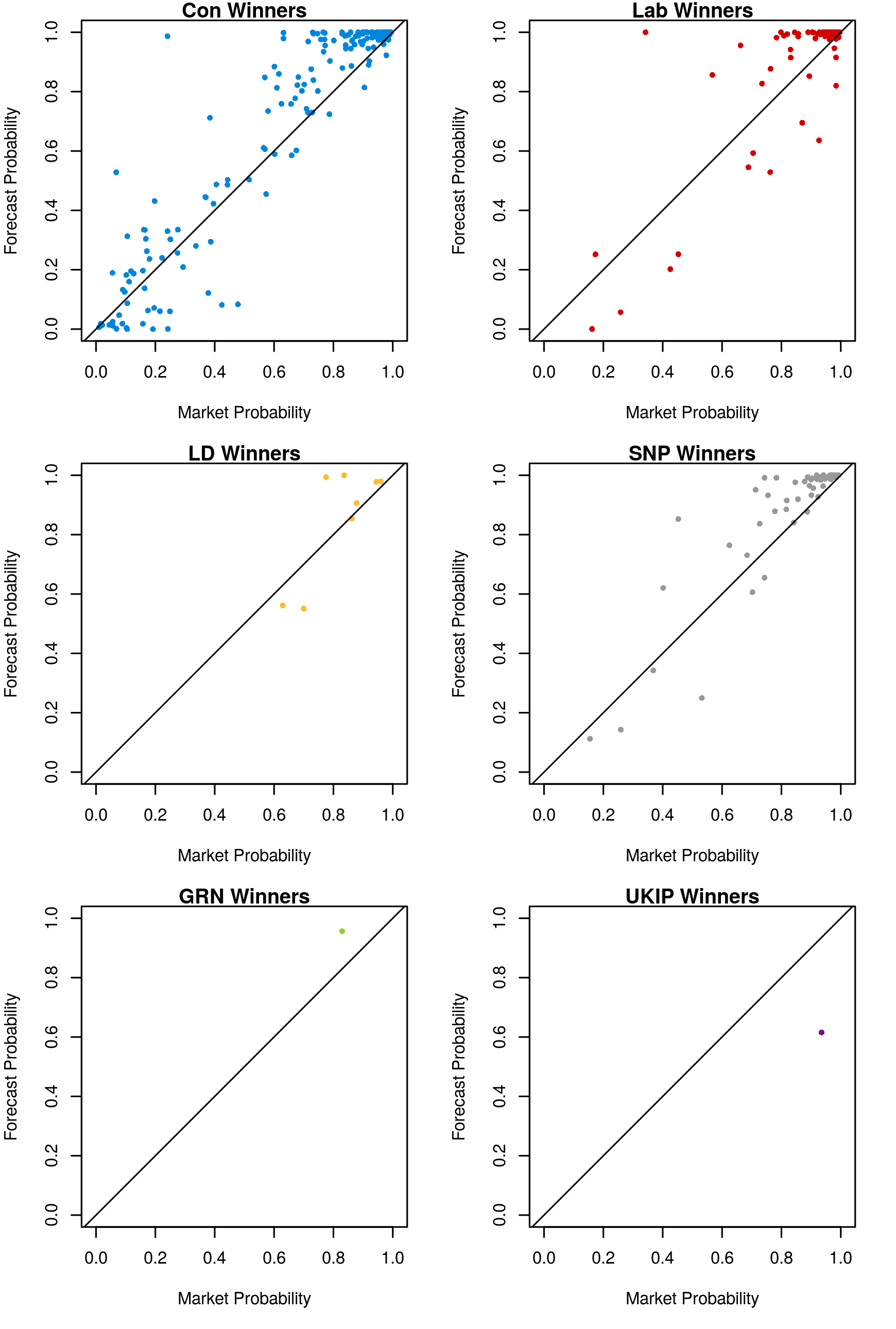 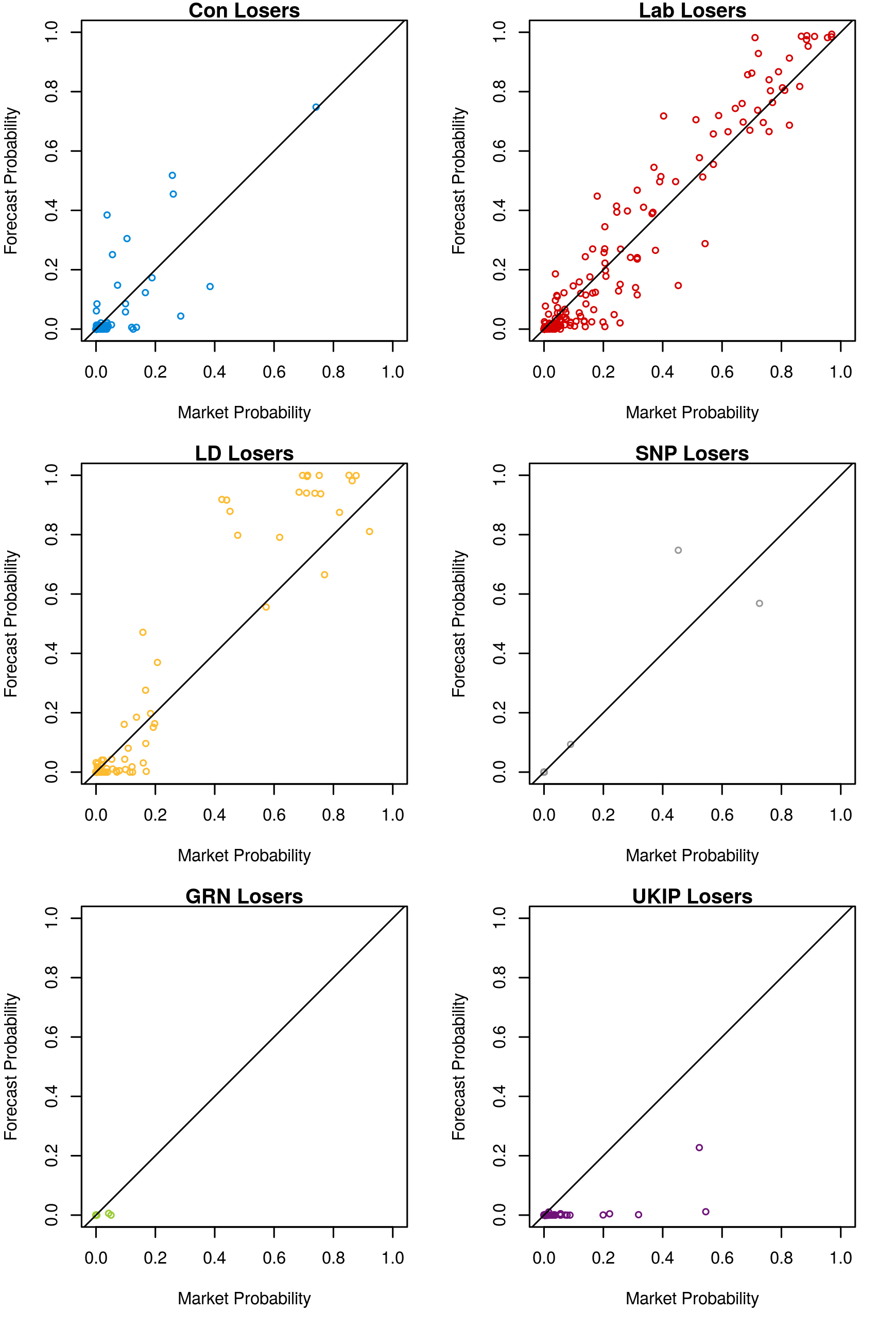 We initially carried out this analysis on the basis of betting market data from the morning of the 5th May and our forecasts from the same day. In that analysis, we found our forecast did slightly better by Brier score than did the betting markets, so we do not think the differences we are observing are especially robust.

Part of the reason that we see very little difference in predictive performance is that there was very little difference between our poll-based forecasts and what the betting markets showed. There are several possible explanations for this. First, our forecasts did not include market data, but the markets could respond to our forecasts. So to the extent to which market participants found our forecast credible, they would have incorporated the information from our model into their betting decisions. Second, both we and the market participants had access to the same polling data, and may have come to similar conclusions in the aggregate despite different methods of analysis.

Consequently – and bearing in mind the poorer performance of the betting markets in 2010 and the systematic failure of the polling industry in 2015 – it would be premature to declare that either method of deriving probabilities of election outcomes is clearly superior to the other.

[1] The Conservative seat spread on the day of the election was 317-322 with Sporting Index. See http://www2.politicalbetting.com/index.php/archives/2010/05/06/the-opening-markets/

[3] This is not strictly equal to a test of “markets versus polls”, for our model incorporated additional elements beyond polls in order to interpolate results for constituencies not polled and to model certain systemic biases in national polling. See this 538 article for a full description of our methodology.

[4] We note that applying this same correction to the markets for national outcomes shrinks the implied probability of a majority government, bringing the betting markets closer in line with academic forecasts. 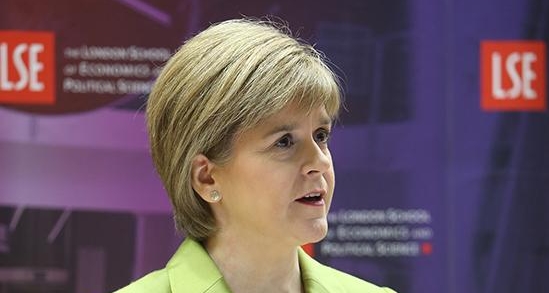 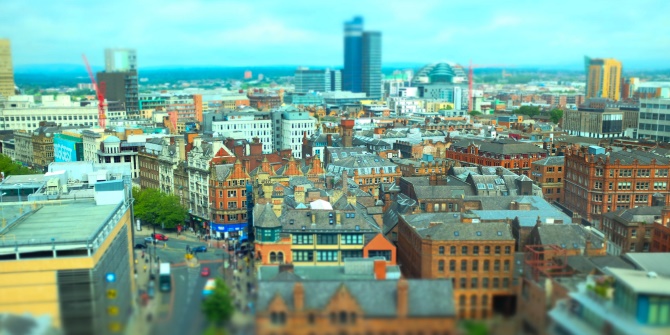