While people have been concerned at technology’s ability to supplant human workers for hundreds of years, modern advances in computing technology mean that whole occupations may soon be made obsolete. In a study of 700 US occupations, Carl Frey and Michael Osborne find that nearly 50 percent are threatened by computerisation. They argue that the next generation of big data-driven computers will substitute low-income, low-skill workers in coming decades, and that low-skill workers will need to train in tasks that are less susceptible to computerisation if they are to remain employed.

Computers have been around many industries for decades, but a new wave of technological development means that occupations once seen as resistant to computerisation are now under threat. The concern about technology leading to unemployment is nothing new. As far back as 1589, William Lee, the inventor of the stocking frame knitting machine, was forced out of England by guilds fearful for their members jobs.

So far the concern over technological unemployment has not materialized. In 1900, over 40 percent of the US workforce was employed in agriculture, but as technology has substituted for almost all agricultural workers (today less than 2 percent of the US workforce), the unemployment rate has remained relatively constant. By and large, over the nineteenth and twentieth century, the net impact of technology on employment has been positive. Yet commentators today still find reason for concern. “How Technology Wrecks the Middle Class($)”, a recent New York Times Column by David Autor and David Dorn, captures an observation made by several commentators: technology has turned on labour.

Recently, low income service jobs have expanded sharply at the expense of middle-income manufacturing and production jobs. There are many more cleaners, food preparation workers, and baggage porters, while the rate of growth has slowed in professions such as plant operators and fabric patternmakers. At the same time, computers have increased the productivity of high income workers, such as professional managers, engineers and consultants. The result has been a polarised labour market with growing wage differentials. Marten Goos and Alan Manning find that job growth in Britain similarly has been in “Lousy and Lovely Jobs”, implying that there has been a hollowing-out of the middle class.

Since the beginning of the computer revolution, the threat of computerisation has largely been confined to routine manufacturing tasks involving explicit rule-based activities. But a study of 700 detailed occupations in the US suggests that nearly 50 per cent are at risk from a threat that once only loomed for a small proportion of workers. The likelihood of a job being vulnerable to computerisation is based on the types of tasks workers perform and the engineering obstacles that currently prevent computers or computer-controlled equipment from taking over the role. Figure 1 shows the probability of computerisation by employment occupational category.

Figure 1 – Probability of computerisation by employment and occupational category 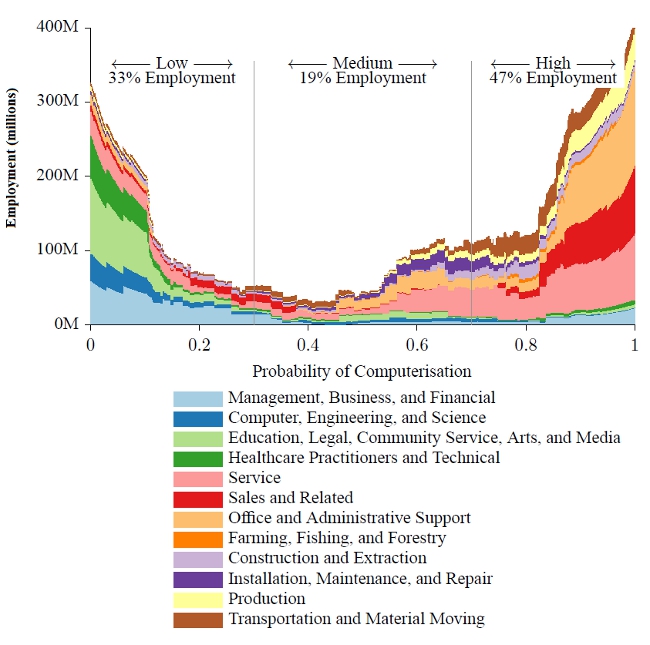 The foremost reason that automation is now a risk for so many occupations is simple: as the cost of digital computing continues to fall, computers are increasingly seen as a cheaper alternative to workers. The associated decline in the costs of digital sensing is tied to the growth of big data: it is now cheaper and more effective to assemble large datasets drawn from automated sensors. Big data has consequently led to the accelerated development of technologies capable of substituting for human workers wherever such data can be gathered. For example, Google uses data from the United Nations, where documents must be translated by human experts into six languages, to monitor and inform the development of different automated translators.

With the improved sensing available to robots, for the first time, jobs in transportation and logistics are at risk. Take the autonomous driverless cars being developed by Google. This new technology may lead to workers such as long-haul truck driver being replaced by machines.

Workers in administrative support functions are by no means immune either. The ability of computers, equipped with new pattern recognition algorithms, to quickly screen through large piles of documents threatens even occupations such as paralegals and patent lawyers which are indeed rapidly being automated($).

More surprisingly, the bulk of service and sales occupations, from fast food counter attendants to medical transcriptionists, where the most job growth has occurred over the past decades, are also to be found in the high risk category. The market for personal and household service robots is already growing by about 20 percent annually. As the comparative advantage of labour in tasks involving mobility and dexterity will diminish over time, the pace of labour substitution in service occupations is likely to increase even further.

The big data era marks a turning point. Nineteenth century manufacturing technologies largely substituted for relatively skilled artisans by simplifying the tasks involved. The computer revolution of the twentieth century on the other hand caused a hollowing-out of middle-income jobs. Looking forward, the next generation of big data-driven computers will mainly substitute low-income, low-skill workers over the next decades. So, if a computer can drive better than you, respond to requests as well as you and track down information better than you, what tasks will be left for labour?

Jobs at low risk of computerisation are generally those that require human-level social intelligence and specialist occupations involving the development of novel ideas and artifacts. Most management occupations, which are intensive in generalist tasks requiring social intelligence, are still largely confined to the low-risk category. The same is true of most occupations in education and healthcare, as well as arts and media jobs. Engineering and science occupations are also relatively immune to automation, largely due to the high degree of creative intelligence they require.

Installation, maintenance and repair jobs are at some risk of automation, but are still safe for the immediate future. These and similar jobs require working in difficult, unstructured environments; machine still have difficulties with perception tasks that seem relatively simple to humans. For this reason, house cleaners, who must delicately manipulate a wide variety of household objects, are unlikely to be automated in the near future.

This means that as technology races ahead, low-skill workers will need to train in tasks that are less susceptible to computerisation – that is, tasks requiring creative and social intelligence, or subtle perception. Otherwise an era of technological unemployment is entirely possible.

Carl Frey – Oxford Martin School, University of Oxford
Carl Benedikt Frey is James Martin Fellow, at the Oxford Martin Programme on the Impacts of Future Technology. His research interests include the transition of industrial nations to knowledge-driven economies, subsequent challenges in terms of economic growth and the efficiency of financial markets. In particular his focus is on regulatory implications of asymmetric information in financial markets; technology change and impacts on labour markets and income inequality; intellectual property rights, investment and economic growth.

The euro should either be made growth and employment friendly as fast as possible, or it should be dismantled

State of the Race for Tuesday, 4 May