This post originally appeared on Charlie Beckett’s blog on 4 September.

Tony Blair’s memoirs are being attacked for all sorts of predictable reasons. His opponents say his interpretation is wrong. Historians and people with pet gripes point out the numerous ommissions. Andrew Rawnsley complains about the ‘dire’ prose style (though I suspect Andrew resents anyone else writing about New Labour). 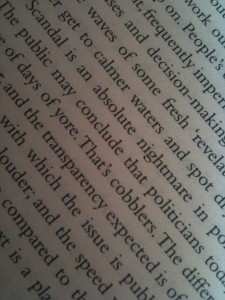 These complaints ignore what is a very novel book by a recent Prime Minister. And it raises some interesting issues for journalists.

It is utterly in the voice of Tony Blair and although it has no great revelations or earth-shattering fresh thesis, it does give a very frank insight into a critical contemporary political figure  (and just because he’s gone doesn’t mean the questions he raises aren’t still relevant – the idea that Mandelson, Brown, Blair et al should somehow keep schtum at a moment when Labour is debating its future is preposterous).

I will leave the grand politics to others, but I was struck by the psychological openness, the emotionalism and the odd humour. In that classic “y’know” Blair bloke-ism, he speaks with what passes for honesty these days. Much of the narrative sections are dull and predictable, but the moments when he speaks with feeling are revealing. It is clear for example, that his mother’s death was critical and that his relationship with women was vital to his well-being. Paradoxically, it was the proximity to two somewhat emotionally violent men that dominated his period of political dominance.

But enough of the bar-room pyscho-analysis. Looking at it from a political communications point of view (and that’s what I am paid to do), what struck me was:

1. How instinctive  much of his communications were

3. How modern political communications places a crushing pressure upon leaders

That sounds odd because everyone thinks of New Labour as the ultimate public relations confection, a marketing machine with pagers, grids and spin doctors planning every event and speech to the last details. Well, yes, Blair makes it clear that they did try to do that. But at the key moments he and many of his team would respond to events at a very emotional level. Reading this book (and Alastair Campbell’s Diaries) Government appears as a whirlwind of unexpected events and surprising upsets, blown faster by the storm-makers in parliament and the media.

He had great speech writers like Phil Collins and masterful advocates such as Alastair Campbell, but it was often Blair’s own personal feelings that produced a phrase or a stance in the heat of the moment. Compare his track record on this with Gordon Brown and you can see the difference between a naturally Great Communicator and someone who simply did not enjoy public interaction.

Put aside the Big One, (Ir*q) and the book is still littered with political communications errors that Blair freely admits, with hindsight. Take his descriptions of his handling of the many personal scandals that his team got embroiled in. His response is invariably emotional and instinctive rather than cold and calculating. Hence the dragging out of the various Mandelson sagas, for example.

This is the most important issue that arises out of this book from a media perspective. It is clear from A Journey that Blair felt constrained as a leader. Of course, all leaders are supposed to be constrained. That’s how democracy stops itself from becoming dictatorship. He himself recognises that this can be seen as ‘whining’.

The ‘brakes’ on his desire for reform were mainly (he says) the forces of conservatism, much of them in his own party and often rallied by Gordon. In other words, other politicians (and civil servants or interest groups). But he also cites the constant barrage of what he sees as biased and destructive media scrutiny as ultimately the greatest barrier to progressive or rational politic discourse around government.

This is back to the Feral Beasts speech which he admits in the book was written in a rush at 4am at the end of his premiership and so possibly a bit too heart-felt in its loathing of British journalists. Yet he also says that political communications is “50% of the battle in the information age”. So what can we learn about this apparent impasse from this book?

First of all, we learn that to be a good political communicator you must say what you believe. Blair  is always accused of being a dissembler. But again, put aside the Ir*q issue on which no-one will ever agree, and the fact is that he really meant what he said. All that ‘right-wing’ stuff about law and order, for example, was deeply felt, not an electoral trick:

“At the top, the scrutiny is microscopic. It is soul-penetrating…If you don’t have core beliefs as a politician…you will never be a good communicator because…the best communication comes from the heart”

To be fair, he seems to blame the whole political culture for turning democracy into a dog-fight, not just journalists:

But does he see his own part in this? He only mentions Alastair Campbell to offer high praise (quite rightly) for his journalistic acumen, political nous and commitment to the cause. Blair correctly cites the Brown team’s destructive and cynical spinning. But A Journey tell a story where his own office was innocent of any such short-term, selfish media manipulation. Hmmm…

Likewise, he tried to woo Murdoch and Dacre  but ended up bitten by the press-hounds he sought to tame.

Throw in some genuine controversies (hunting, Ir*q, Asylum, ASBOs, terrorism, Academies, NHS Reforms etc) and you have plenty of reasons for febrile public debate. He knew he was trying to reform entrenched interests and was then surprised when they fought back through the media.

In A Journey Blair accepts with remarkable honesty the polling evidence that by the end he was no longer able to carry the British public with him.

He blames the ‘inevitable distancing’ of leadership. The public gets bored with leaders if they stay around too long in the media limelight. He also accepts that he was becoming uncompromising. The solution? To attempt a new relationship with his party and voters:

“New technology and new forms of campaigning gave us tools to do it. My vision was to discard the conventional notions of party membership and structure, to treat supporters as members for key decisions and to use the new technology not merely to build out into new support but also to interact wit h supporters and to campaign in a different manner.”

This is an agenda that has much in common with one set out in a book written by Blair’s polling guru, Philip Gould. Unfinished Revolution, published back in 1999 when New Labour was at its peak spoke with huge prescience about the gulf between party politics and the public. It was a celebration of the reform of the Labour Party but it’s title made the point that real democracy in political communications is a deeper and more thorough-going project.

Paradoxically, achieving power may actually hinder the process. As we are hearing from the candidates in the current Labour leadership race, greater engagement is something that politicians call for before becoming leaders. And as A Journey makes clear, it also something they realise would have been a good idea just after they leave office.