Pascal Michaillat discusses research on employment during recessions, arguing against unemployment benefit cuts as a tool to incentivise job-seeking and suggesting that public employment is especially effective at stimulating the economy – without crowding out the private sector – at any time when the labour market is depressed.

Anyone who has watched Charlie Chaplin’s film Modern Times knows that people queue for jobs in recessions. In a famous scene, Chaplin opens the newspaper and learns that his old factory is rehiring. He runs off to the factory where he meets hundreds of people seeking employment. The last one to sneak through the gate, Chaplin gets a job while many others are left queuing outside the factory gates. The model of ‘equilibrium unemployment’ developed by Peter Diamond, Dale Mortensen and CEP’s Christopher Pissarides – for which they were awarded the Nobel Prize in 2010 – provides a very appealing description of the labour market because it describes the creation of jobs by firms, the search for vacant jobs by unemployed workers and the process of matching firms with workers.

But the model seems inadequate to describe the recessionary unemployment of the Great Depression and more recent times when the business cycle has turned down. The search model of unemployment is inconsistent with the existence of queues in recessions: it converges to full employment when unemployed workers devote an arbitrarily large effort to search for jobs. In other words, all unemployed workers could find a job if they searched sufficiently. 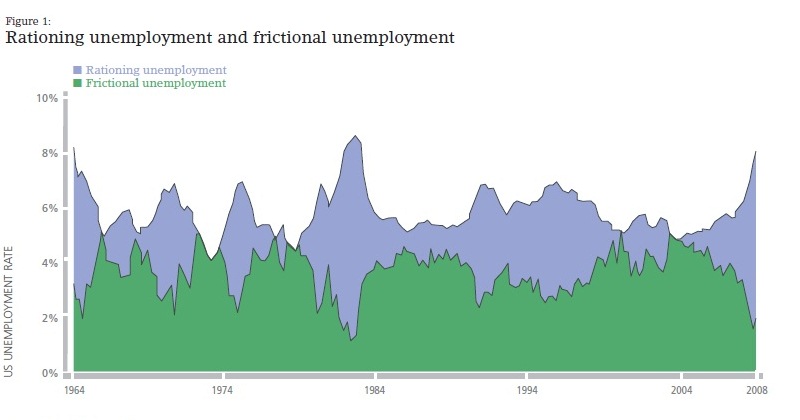 Even though the labour market always sees vast flows of jobs and workers and a great deal of matching activity, recessions – as in the early 1980s, the early 1990s and the late 2000s – are periods of acute job shortage during which matching frictions have little influence on labour market outcomes. The intuition is simple once we think about queues. In recessions the firm can hire a new worker immediately, at no cost, in the queue in front of the factory gates. If the firm does not hire a new worker, it is not because of recruiting costs but because it would not know how to use an extra worker. With this result in mind, we can think about the design of economic policies over the business cycle.

When unemployment is high, a critical policy is unemployment insurance. We often hear economists asking for unemployment benefits to be lowered in recessions. They argue that a reduction of unemployment benefits would force jobseekers to spend less time on the couch and more time actively searching for a job. As a result, they say, unemployment would fall and the economy would recover. They are probably right about the first point that workers would spend more time off the couch searching for a job. But they are mistaken about the second point that unemployment would fall because they forget that people queue for jobs in deep recessions. Once this feature is incorporated into a model, unemployment does not depend much on the efforts of jobseekers in recessions (even when the economy has not reached the point where queues form in front of factory gates).

To understand how to design unemployment insurance in a model consistent with the existence of queues in deep recessions, I collaborated with Camille Landais and Emmanuel Saez. Our main result is displayed in Figure 2, which plots the optimal replacement rate – the amount transferred to unemployed workers expressed as a fraction of the income of employed workers – as a function of the unemployment rate. It is optimal to increase the generosity of unemployment insurance in recessions: the replacement rate increases from 51 per cent to 71 per cent when unemployment increases from 4 per cent to 10 per cent. Again, the intuition for this result is simple once we think about queues. What would happen if the government drastically reduced unemployment benefits in recessions? Perhaps unemployed workers would spend eight hours a day in job queues, instead of four hours in the queue and four hours on the couch. 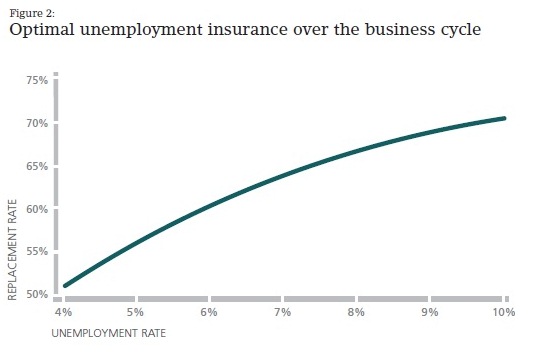 This reduction in benefits implies that there are now, say, 200 people instead of 100 people continuously queuing in front of the factory gates. But the larger number of applicants does not matter for the firm. I have already argued that if the firm does not hire a new worker, it is not because of recruiting costs but because it would not know how to use an extra worker. While lower unemployment benefits do make unemployed workers poorer, they do not reduce unemployment much. So reducing unemployment insurance in recessions is undesirable.

Some will say that this argument cannot possibly be correct. We (economists) know that when an unemployed worker loses his entitlement to unemployment benefits, he finds a job much more rapidly than before. That is true. Think about the queues. If you lose your benefits, you will fight your way to the gate and increase your chance of getting the job when there is an opening. But when you move up the queue, the workers that were in front of you are now behind you, and they move down the queue. The labour market functions as a rat race in recessions. Forcing people to search harder will not increase the number of people who find a job. It may only change who finds a job. So it is not desirable to make unemployed workers poorer. It will not create more jobs, only more competition in the queues.

Finally, fiscal policy may be useful to reduce unemployment in recessions. One common complaint about fiscal policy, however, is that it may negatively affect the private sector. These negative effects may undo the possible beneficial effects of the policy. For example, during the Great Depression, US fiscal policy took the form of public employment. President Roosevelt’s administration hired millions of unemployed people to build dams, bridges and roads. The goal of public employment was to bring unemployed workers back to work. But the Roosevelt administration was concerned that the public jobs created as part of the New Deal might make it more difficult for private firms to hire workers by taking away job applicants. They thought that if a mason were hired by the government to work on a public building, it could prevent a construction firm from filling a vacant mason job. If each public job displaced a private job, then it would indeed be ineffective to resort to public employment.

My research shows that while the Roosevelt administration would be right to worry about the displacement of private jobs by public jobs in expansions, there is barely any displacement in recessions. Public employment is especially effective at stimulating the economy at any time when the labour market is depressed. This result is illustrated in Figure 3, which displays the increase in the employment rate achieved by spending 1 per cent of GDP on public employment. In the basic model (the black line), the number of jobs created by public employment increases nearly fourfold from 0.27 to 1.15 when the unemployment rate increases from 4 per cent to 10 per cent. The number of jobs created is larger when public sector employees contribute to improving infrastructure (the orange line) because building public capital improves productivity in the private sector, which translates into higher private employment in the future. The number is also larger when public jobs pay somewhat below private jobs (the green line, which is obtained with a 5 per cent wage premium in the private sector). 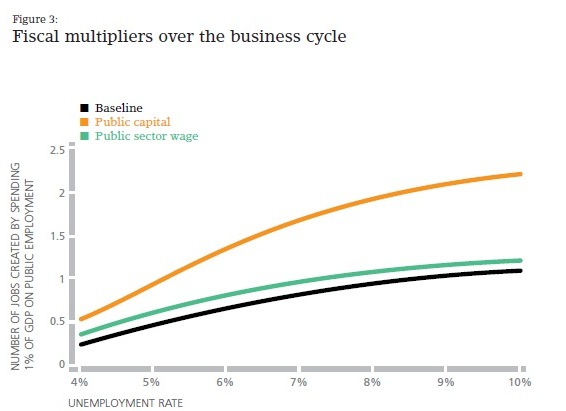 These results suggest that the Roosevelt administration responded appropriately by hiring workers as part of large infrastructure projects, and by paying relief-job wages typically well below private sector wages. The model is too simple to be the basis for quantitative estimates of the effects of actual fiscal policy interventions. Nonetheless, it has some theoretical features that could guide the design of policies in recessions. A first feature is that to maximise the benefits to society as a whole, unemployment insurance should be more generous in recessions and less generous in expansions. Another feature is that the government disturbs private employers much less when it hires workers in recessions instead of in expansions.

This article was originally published in the LSE Centre for Economic Performance’s CentrePiece magazine.

Pascal Michaillat is a lecturer in economics at LSE and a research associate in the Centre for Economic Performance’s labour markets programme. 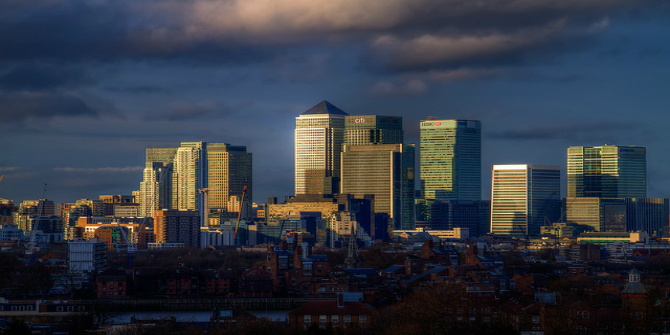