The UK labour market has done much better than expected since the start of the recession. Although we are suffering the worst recovery for over a century – national income has shrunk by almost 3% since 2008 – jobs have held up. Professor John Van Reenen explains that the main reason for this paradox is that real wages have collapsed, allowing firms to enjoy cheaper labour despite low demand for their goods and services.

So much for the ‘green shoots’ of recovery. The UK jobs figures released 15 May by the Office for National Statistics tell a sorry tale. Almost five years since the crisis started, we have 2.52 million people unemployed – that’s 7.8% of the labour force – and the numbers for the first quarter of 2013 are up by 15,000 from the last quarter of 2012.

Slow growth has hit young people hard with now 958,000 of the 16-24 age group unemployed. What’s even more worrying is the large number of people who are long-term unemployed: over 900,000 have been unemployed for year or more – 36% of the total jobless.

But hasn’t the government been boasting about how great our jobs market is? What’s the real deal on unemployment?

More jobs than ever before?

The headline claim that ‘there are more people in work today than before the economic crisis started’ is true but it is also profoundly misleading. Employment has risen a little – from 29.5 million in 2007 to 29.7 million up to the release of the jobs figures – but the adult population has also risen. This means that the proportion of people over 16 who are in work, the employment rate, has actually fallen from 73.1% at the end of 2007 to 71.4% in 2013 (see Figure 1).

What’s more, there is evidence of underemployment as there has been a big rise in the proportion of part-timers, temporary workers and ‘zero-hours’ contracts. Even more striking is the boom in the number of people who would like to work more hours at their current wage rates, but cannot get the extra work. Although the unemployment rate rose from 5.2% at the end of 2007 to 7.8%, estimates of the underemployment rate rose from 6.8% to 10.5%.

Figure 1: The employment rate is still below its level at the start of the Recession 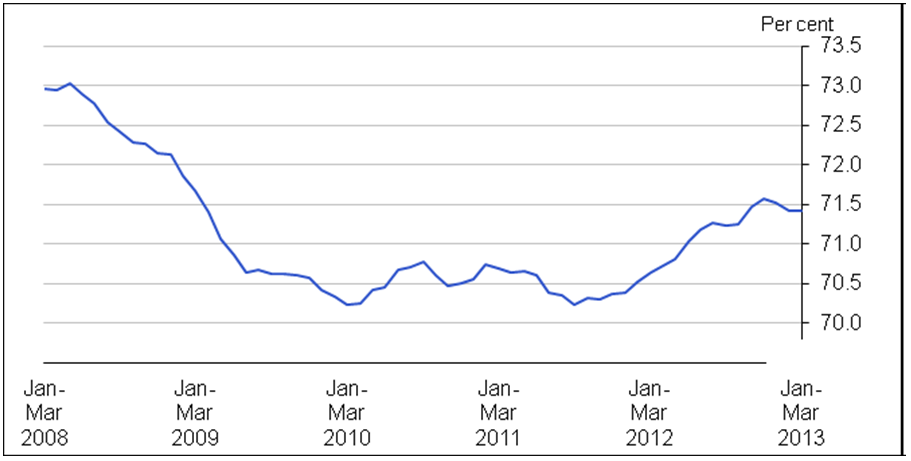 Notes: Employment rate is the proportion of the UK population over the age of 16 who are in work

Despite these caveats, economists expected the labour market to look in much worse shape given how lousy UK growth has been. The main explanation for the puzzle is that real earnings have fallen massively since 2008 (see Figure 2). Regular pay rose by only 0.8% this year – the lowest growth since records began. Cheaper labour means that employers do not have to lay off so many workers in spite of lower sales.

This pattern of falling real wages in a recession is new: real wages did not fall in the early 1980s and early 1990s recessions. It is likely that this increased wage flexibility is due to the decline of union power and welfare-to-work reforms over the last three decades. In the early 1980s, job centres did not try so hard to find people jobs and claimants were switched onto disability benefits so as to massage down the unemployment numbers. Very few individuals were likely to ever move back into employment once they were on these benefits.

Although painful for workers, having low wages is better than having no wages so this earnings flexibility is useful as it keeps a lid on unemployment. And the ‘scarring’ effect of recessions comes through long-term unemployment as people lose skills, motivation and job networks. This reduces the potential growth rate of the economy through so-called ‘hysteresis’ effects.

Nor do these low wages seem to have discouraged people from looking for a job as participation rates have risen when normally they fall in a recession as people give up looking for jobs altogether (perhaps because of falls in house values or increases in the retirement age).

Figure 2: Pay has not kept up with price inflation 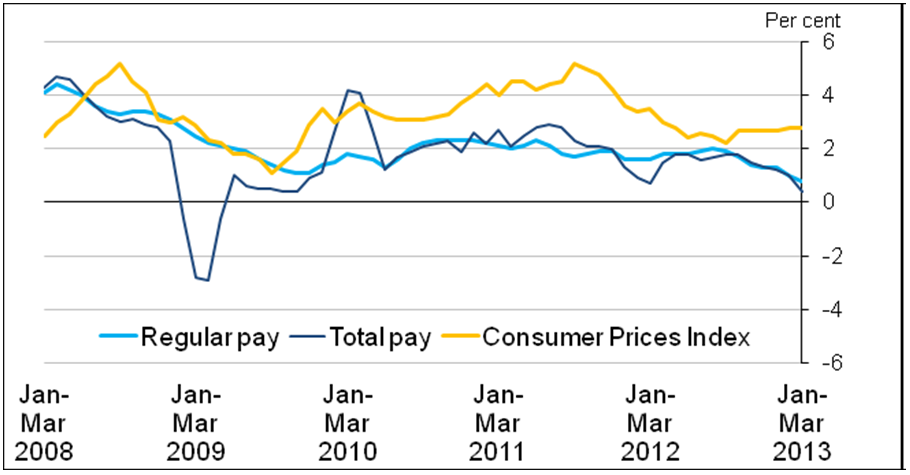 What needs to be done – get building now!

The fundamental problem facing the UK is low demand compounded by a dysfunctional financial system. The best way to tackle the demand problem would be for the government to spend at least £20 billion on infrastructure over the next two years as recommended by many recent studies by the IFS, NIESR and CEP.

As the LSE Growth Commission emphasised, the UK has failed to invest adequately in infrastructure for many decades and we have pressing needs in transport, housing and energy. Although addressing these problems requires long-term structural reform, we can kickstart things now by reversing some of the 40% cuts in investment, which would create positive multiplier effects to the wider economy.

The government itself has identified over £300 billion of infrastructure projects needed over the next decade, even though it has no convincing growth plan over how to deliver these and what priorities to take. There are plenty of ‘shovel ready’ investments to get going with such as road repair and entry-level housing. The government has no excuses – it’s time to get the country moving again.

This piece was originally commissioned by The Conversation.

The success of the R&D tax credit shows that there can be a role for public policy in stimulating innovation and growth.