Britain’s model of home ownership is under severe strain. House price volatility has become the constant – and delinquent –  companion of the UK economy. It has affected economic policy at the highest level, most notably the decision not to join the Euro in 2003. With four boom and bust cycles since 1970 we have yet to learn the lessons from past recessions so that we can change the record and inject more stability into the UK housing system, argues Professor Mark Stephens, as The Joseph Rowntree Foundation Housing Market Taskforce set out to change the record and look for solutions that could smooth the housing market cycle

So why does volatility matter?

The uncertainty generated by house price volatility affects us all. For individuals there is a temptation to overextend borrowing, in a boom with 8.5 percent of mortgagors in negative equity. House building is disrupted by these cycles with the lowest rate of house building since 1923. For lenders the risk of creating an unsustainable house price bubble looms large, and for the Government, housing market recessions necessitate costly knee jerk policy reactions.

This volatility increases risks as the housing market interacts with the economic cycle. The spectre of redundancy still looms large in the UK economy with 100 families a day being repossessed in the first quarter of 2011.

Volatility also inhibits labour mobility with around 2 million households unable to move at the end of 2008 due to having limited or no equity. People are priced out of growth areas in booms and locked them into properties in downturns. As Figure 1 shows, the last cycle disconnected some local housing markets so far from the national picture, distorting this picture still further.

Private renting has expanded and helped to meet the gap, but is itself subject to volatility with between 11,000 and 18,500 private tenant households subject to repossession each year simply because their tenancy has expired. Meanwhile buy-to-let repossession rates run at remarkably similar levels to home-owners (table 600). Lack of affordability in the market sectors places further pressure on the social sector, with 1.8 million households on council waiting lists.

The changing profile of home owners has stretched the UK model of home ownership beyond its limits. Home-ownership is being turned into the engine of inequality between generations as the young – and now not so young – pay for the wealth accumulation of older people. The reliance on parental assistance entrenches the economic privilege of the children of the better off.

Whilst home ownership has fallen most among the youngest age cohorts, as Figure 2 shows, the fact that it now affects those in middle age gives us even more cause to worry.  We cannot be sure that those who are buying later will ‘catch up’ potentially leaving us with an increase in pensioner poverty and a welfare headache. Currently the lack of housing costs reduces pensioner poverty from 20.4 per cent to 16 per cent. 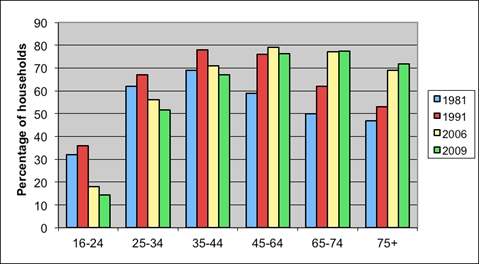 Housing policy shouldn’t distort people’s tenure choices or set targets for specific housing tenures. However it can focus on longer term solutions that will deliver:

Supply is key to tackling both volatility and affordability across the market. However, at current building rates the ratio of lower quartile house prices to income will rise to 10.9 in 2026. It is essential therefore that the planning system facilitates appropriate new development. The planning system must provide sufficient incentives to increase supply. Measures such as land auctions and over-provisioning of permissions may play a role here. While most new development will come from the private sector, social rented housing still has an important role to play.

Since supply is a long-term solution, we must also look to more short run ways of managing volatility. As Spain and Ireland demonstrate, increasing housing supply on its own doesn’t create immunity from boom/bust cycles. Credit controls could provide a useful tool. For example, time limited maximum loan-to-value ratios could prevent credit fuelling unsustainable house price booms. The reform of property taxation could also play an important role here. There is an overwhelming case for reforming the structure of Stamp Duty by replacing its current ‘slab’ structure with a ‘slice’ structure. By uprating thresholds automatically every year, it could also exert a counter-cyclical influence on the market.

Council Tax is also ripe for reform. It could better to reflect changes in property values, first through revaluation (as has occurred in Wales). 3.7 million households in England are worse off as a result of the failure to revalue bands. Second, moving to a ‘point value’ structure (as has been adopted in Northern Ireland). This would also improve fairness between places: Londoners pay only 0.36 per cent of property values in council tax despite London house prices being 144 per cent of the average house price. Finally, a national property tax requiring the restructuring of local authority funding could be created. This would require careful planning but the abolition of mortgage interest relief shows that taxation reform is possible.

Better safety nets also need to be developed to protect owners from the consequences of volatility. This should involve:

It is clear that volatility can be tackled only by looking across the system as a whole. While it is always easier to postpone difficult decisions, one thing is certain. If volatility is not tackled now, we shall enter yet another cycle of boom and bust.