John Eatwell and Murray Milgate present an excellent collection of essays on the possible role that Keynesian ideas could play in fixing today’s economic problems. Gerardo Serra sees the book as a much welcomed contribution to current debate: rigorous in the use of theoretical concepts, historically informed, and of crucial importance for present day policy concerns. 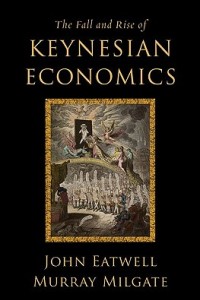 Since the beginning of the current economic and financial crisis, countless books have addressed the question, is John Maynard Keynes the right man to invoke to fix today’s economic problems? Yet few people can claim the authority of John Eatwell and Murray Milgate to engage with Keynes’ complex intellectual heritage. Editors of the prestigious Palgrave Dictionary of Political Economy, and of journals such as the Cambridge Journal of Economics and the Oxford based Contributions to Political Economy, Eatwell and Milgate are well known among economists and historians of economic thought. Besides their purely academic work, the authors have constantly tried to employ their positive understanding of how real economies work as a tool for political change. Eatwell, for example, president of Queen’s College at the University of Cambridge, has been economic adviser to the Labour Party, and is currently Labour Member of the House of Lords, and, since 2010, Labour Opposition Spokesman for the Treasury.

The Fall and Rise of Keynesian Economics is a collection of essays, in most cases published  in books, newspapers, and academic journals, and newly revised for the volume under consideration. In contrast with the prevailing view in orthodox economic and political circles, associated with a narrative of rise and decline of Keynesian economics, the authors of this interesting work aim at resurging the ideas of the great Cambridge economist to shed light on the current situation. The book is divided into four parts, named respectively ‘Practical’, ‘Analytical’, ‘Critical’ and ‘Historical’. The first section, comprising six essays, deals explicitly with today’s challenges, and identifies a list of possible solutions. Many of them would sound controversial at a time where austerity and sound finance inspire much discussion about economic policy.

‘Keynesian’ economic policies also tend to be associated, (alas!) among professional economists, simply to more state intervention in the form of increased public expenditures, and attempts to increase consumption and lower interest rates. These essays show convincingly that this is a misconception, and that the main lessons that should be learnt from Keynes’ writings lie elsewhere. In fact the core of the struggle for the creation of a better economic system is not to be observed in the static opposition of state and market, as it appears to be in much public debate over economic policy choices. Rather, the path to stability and full employment (the true goals of Keynesian economics) implies a more radical departure from the current regulatory framework. Too much attention paid to the patchy notion of  transparency, which “has nothing to do with the systemic risk that is the proper object of regulation” (p. 57), lack of international coordination, and the failure to understand the importance of price stability, which is hindered by the current liberalized financial system, represent the main challenges faced by today’s policy makers.

The high level of abstraction of the remaining parts of the book, concerned with the exploration of the analytical foundations of Keynes’ (and his opponents’) theories, will make it overall less appealing to the non-economist reader. However, it is in sharp essays such as ‘The Imperfectionists’, ‘Theories of Value, Output and Employment’, and ‘The Analytical Foundations of Monetarism’ that the outstanding level of Eatwell and Milgate’s scholarship emerges more distinctly. According to the authors, mainstream contemporary macroeconomics provides an inappropriate box of tools to understand the world we live in. Pointlessly assuming the existence of an equilibrium as the centre of gravitation of the economy, desperately attempting to reconcile micro and macro-foundations, neoclassical macroeconomics is a mere “catalogue of imperfections” with little explanatory power. From Smith to Ricardo, from Hayek to Marx, from Fisher to Joan Robinson, the reader embarks in a delightful and useful journey through several centuries of economic thinking, and is put in the condition of fully understanding the importance of Keynes as a brilliant theorist and an apt mentor to inspire current policy-making.

Throughout the book the reader encounters a certain number of repetitions, which perhaps could have been avoided by merging the content of a few essays and reducing their number. The comparative analysis of Keynes and Schumpeter presented in the last chapter (‘The economic possibilities of Capitalism’), while of great historical interest, is perhaps not the best way to end the volume. In the context of British policy debates, Keynes’ ideas are more likely to be opposed to those of Frederick von Hayek, traditionally considered one of the sources of inspiration behind Margaret Thatcher’s economic policies. Furthermore, at the end of such a practical, analytical, critical and historical tour de force, a conclusive chapter summarizing the main findings of the work would have been useful.

In spite of these minor criticisms, The Fall and Rise of Keynesian Economics can easily be included among the best books published in the aftermath of the crisis on the possible role that Keynesian ideas (if, and only if, correctly understood) could play to fix today’s economic problems. Given the theoretical nature of most of the book, the audience which would benefit the most from reading the volume is composed of students of economics, who often complete their studies with a vague and over-simplistic understanding of Keynes’ economic ideas. In conclusion, the book is a much welcomed contribution to the current  economic debate: rigorous in the use of theoretical concepts, historically informed, and of crucial importance for present day policy concerns. The glorious Cambridge tradition still lives on.

Posted In: Economics and the Financial Crisis | Political Theory

Book Review: The Unfinished Global Revolution: The Limits of Nations and the Pursuit of a New Politics