When resources are allocated without regard to price, as with UK land use regulation, the consequences are often bad for business and consumers. Paul Cheshire, Christian Hilber and Ioannis Kaplanis and colleagues find that the restrictions that planning policies impose on retail development have significantly reduced the productivity of supermarkets.

Elementary economics teaches that there are three factors of production – land, labour and capital – yet the importance of the first input is all too frequently neglected. Nowhere is that more evident than in the UK’s system of land use planning, in which a scarce resource is allocated without any regard for markets or prices. Indeed, price information is explicitly excluded from decisions about land use, so it is only after the supply of land is allocated to each use that the price is set in markets.

But as the government seems to recognise in its commitment ‘to reform the planning system radically and fundamentally’, rationing land use in this way has a significant impact on efficiency and growth, imposing substantial costs on households and businesses. Given the present goal of economic growth with fiscal rectitude, reforming our system of land use planning is almost certainly the simplest, the cheapest and the most effective route to freeing up the supply side of the economy.

Of course, the planning system does have significant benefits, mainly in the form of open space in cities and the separation of industry from residential areas. But even allowing for the value produced by the system, in prosperous and tightly constrained south east England, the restriction of land supply for housing generates a substantial net loss for society – equivalent to a tax of nearly four pence in the pound.

Restrictions on office building have led, at the extreme, to an increase in costs equivalent to an 800 per cent tax on the marginal costs of construction. Even depressed provincial cities, such as Birmingham, have an average equivalent tax on the marginal costs of construction of 250 per cent. As would be expected, building costs in Birmingham are only about half of those in Manhattan, but total occupation costs are 44 per cent higher (Cheshire and Hilber, 2008).

Our latest research focuses on the retail sector, where we have had access to a uniquely rich data set for one of the major supermarket chains. Merging detailed information on each store with other spatial data (such as the distance to competing stores, local population and car ownership density), we can estimate the contribution of space to each store’s productivity. As expected, it is highly significant: bigger stores are considerably more productive.

Then we measured the impact of planning, where restrictions on retail development have tightened since 1988. In England from 1988, policy tried to control not just the area of land available for retail development but where development should take place at a micro-level.

This policy was tightened further in 1996, when a ‘town centre first’ policy was introduced. The new policy forced would-be developers to show first that the local area ‘needed’ more shopping space (‘need’ being defined in legalistic not economic terms) and then to pass a ‘sequential test’. Developers had to demonstrate that for any proposed development, there was no ‘suitable’ site in the town centre (again with ‘suitable’ defined in legalistic terms).

To be ‘suitable’, a site had to have been identified in the Local Development Plan (though only a minority of local authorities have such a plan) and to be in the designated town centre. That the site was owned by a competing retailer did not make it ‘unsuitable’. Thus the planning system was ‘micro-managing’ the location – even the specific sites – for development and effectively prohibiting out-of-town superstores.

Analysing our store level data revealed a striking pattern related to the date at which a store was opened. Controlling for all other factors, productivity increased over the first 20 years from the oldest stores to those established in the late 1980s (see Figure 1).

Figure 1: Productivity by year of opening: controlled for all other factors 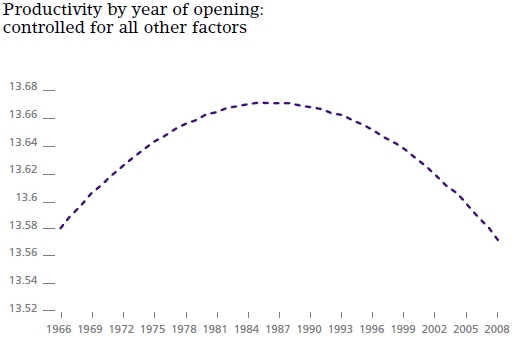 But for stores established after the late 1980s, productivity fell so that in the most recently established stores, productivity was actually lower than in the oldest stores of all. Even more revealing was that this relationship only existed for stores in England, where the micro-management of specific locations had started in 1988 and had been much more vigorously enforced.

A second route by which planning policies might reduce retail productivity is through overall restrictiveness. A local authority that restricts development more tightly may raise the price of all types of development, including the price of retail space. If land prices are raised, stores will tend to be smaller and so less productive.

We used data on planning decisions for all English local authorities since 1979, which could be used as a measure of local restrictiveness. Careful analysis of this data (taking account of the possibility that if a local authority is known to be particularly restrictive, potential developers may not apply in the first place) confirmed that stores are smaller where planning policy is more restrictive and enabled us to quantify the relationship reliably.

Together these results allow us to estimate a lower bound impact of land use planning on supermarket productivity. It is lower bound because it is conservative to assume that without the town centre first policy, productivity would have continued to grow only at the rate between 1966 and 1986: for example, US retail productivity growth accelerated sharply in the 1990s. But making that assumption implies that the town centre first policy reduced supermarket productivity in England by 16 per cent.

Overall, therefore, it seems that on the most conservative assumptions, planning policies in England have reduced retail productivity by more than 20 per cent. Lower productivity entails higher prices – and since poorer households spend a larger proportion of their incomes in supermarkets, this probably hits poorer households harder than richer ones.

The 20 per cent reduction in retail productivity that our study finds is a measure of the gross costs to the economy. It is possible that there are benefits generated by such restrictive policies. In the next stage of this research, we intend to quantify the effects of planning policies on the carbon footprint of the retail sector. Reduced energy use is one of the main benefits claimed for town centre first policies, based on the assertion that they promote ‘linked trips’, thus reducing overall travel.

But it is by no means clear that the evidence will show a reduction in net carbon use. With continued decentralisation of urban populations, people may have become separated from supermarkets, not only extending their trips but forcing them into more  congested conditions. Equally, restocking of supermarket shelves may have become more energy-intensive with a larger number of smaller lorries operating in more congested conditions.