The Resolution Foundation’s Gavin Kelly, finds that  the Liberal Democrats are driving through changes to the structure of personal tax allowances, so far going widely unnoticed by the media and the public. What’s more is that the changes are about to give all three leading parties a huge headache.

For many politicians, tax cuts are the elixir of politics. In times of plenty they are deployed triumphantly as evidence of a thriving economy; in times of hardship they are handed down by chancellors as a salve to a hard-pressed public. So it should come as no surprise that, even in this parliament – dominated as it has been by arguments about fiscal austerity, tax rises and lower spending – there will be a growing debate about which taxes to cut.

Political gravity will ensure this is the case. As the economy gradually recovers – at the same time as the pain of the deepest and longest wage squeeze in living memory maintains its grip on family bank balances – politicians will be desperate to offer hope of better times ahead. They will know that tax cuts won’t solve the structural problem of stagnant wages, nor will they deal with the rising pressures on the cost of living. And there will still be sharply differing views about whether tax cuts for some mean tax rises for others, as opposed to further cuts to spending. But have no doubt: all party leaders will be forced to offer respite to a public whose anger about falling living standards will reach boiling point over the next few years.

So, how will the coming tussle over tax cuts play out? There will be a few early skirmishes following the Budget, which inevitably included a few popular giveaways – such as the cut in fuel duty and support for first-time house buyers – along with a tax cut for business (and let’s not forget that George Osborne has already proved capable of pulling rabbits out of a hat, as with his dramatic promise to raise the inheritance-tax threshold in October 2007 – a move that skewered Labour’s plans for an early general election).

Osborne clearly wants to burnish his credentials as a Lawson-like tax reformer as well as a spending cutter, so in the months ahead he’ll talk up the radicalism of his long-term ambition to merge National Insurance and income tax. But the challenges involved in this are daunting, and the Conservatives are very unlikely to go into the next election having just raised the basic rate of income tax by 12p, so don’t expect this to yield practical policies any time soon.

Indeed, it says something about the topsy-turvy state of today’s politics that we need to look first at the Liberal Democrats to understand the shifting politics of tax. It is perhaps the least remarked-upon story in Westminster that the smaller and deeply unpopular coalition partner is driving one of the biggest changes in domestic policy – and in a department it doesn’t even control. Not since the days of David Lloyd George have Liberal politicians had such influence over the Treasury’s tax policies.

The ambitions of senior Liberal Democrats are not to be underestimated. Nick Clegg knows what he wants. He has been fighting hard for it internally and he is going to succeed in getting most of it – notably, a £10,000 income tax personal allowance at a total cost of more than £13bn (having already secured a commitment to a rise in the personal allowance from £6,475 to £7,475, increased in the Chancellor’s 23 March Budget to £8,105 in April 2012.

Clegg’s party has been emboldened by the quiescence of its Conservative partners. That is in part because the £10,000 commitment is a central fact of the coalition agreement, but it has also served the Conservative leadership’s purpose to go along with something that deflects irritant calls from Boris Johnson and the Tory right to prioritise the removal of the 50p tax rate for the top 1 per cent of earners – a move that would delight Labour – just as it provides Tory leaders with a ready-made and voter-friendly tax-cutting agenda to talk about.

This context helps explain why senior Liberal Democrats, battered on so many fronts, are more ideologically self-confident than their coalition partners on this naturally Conservative terrain. They are the ones making the political weather on tax. Buoyed by this, they have set about working on what they should be seeking to achieve by 2015; and, more significantly, what their distinct Liberal ambitions for the tax system should be in 2020.

The priority is to achieve and then surpass the totemic commitment to increasing tax-free allowances. Don’t be surprised when Liberal Democrat outriders call for a detailed plan for securing the £10,000 allowance in this parliament and £15,000 in the next.

One of the great political advantages of having a single, emblematic tax policy is that, in contrast to many of the tax changes of the Blair/Brown years, it is an easy thing to communicate. Quite simply, people are likely to get it. So where’s the rub? The hard truth that Clegg and his team have largely sidestepped is that the simplicity of the allowance policy comes at a sig­nificant price: the distributional effects of the strategy are distinctly odd. Some high-income households (often with no children) gain quite a lot each time the allowance is raised, while many middle-income families with children gain nothing and, indeed, are set to lose a great deal and the very poorest, who don’t pay tax, won’t get a penny (see chart 1 below). 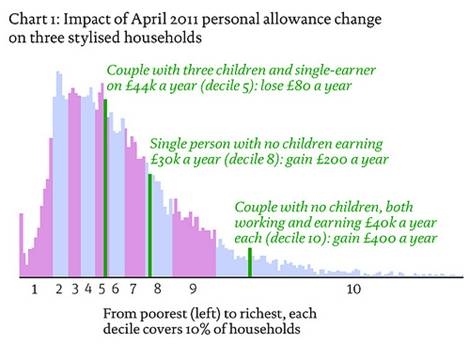 For now, Clegg will shrug off these charges with the broad-brush argument that individual beneficiaries are overwhelmingly basic-rate taxpayers. He will not be so relaxed if a popular sentiment emerges that his prized tax strategy offers little to precisely those working (and politically footloose) middle-income families that hold the key to the next election.

All of this gives the Labour leadership plenty to reflect on. Apart from airing its internal travails over the 50p rate, and Ed Balls’s recent call for fuel to be exempt from the January VAT increase, Labour has said remarkably little about tax. Many on the political right, together with much of the media class – and some former New Labour figures – have already written off Miliband and Balls as big-state high taxers with no “feel” for the concern of people striving to get on in life, nor the discipline to rein in a party hard-wired to tax and spend. That is likely to be a serious misjudgement.

Recently Miliband has said that he supports “genuine” tax relief for low-to-middle-income earners but won’t back a “tax con” in which a personal allowance giveaway is funded out of a hike in VAT. For now, that is a reasonable position: many low-to-middle-income earners will be worse off once increased allowances and VAT are taken into account; painfully so, once cuts to tax credits are factored in. But stick to this position for too long, and Labour will be badly exposed. Few expect the recent increase in VAT to be reversed come the next election. As chart 2 shows (below), the VAT rate has long been converging on the basic rate of income tax – Labour in power tends not to cut Conservative increases to VAT, whatever it says in opposition. Nor is there much prospect of it reversing the coalition’s increased tax allowances and, in doing so, dragging many modest earners back into the tax system. 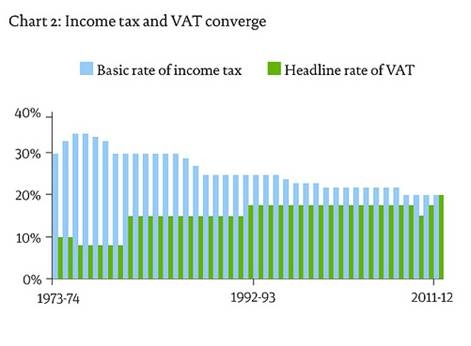 So, the risk is that Miliband ends up entering an election in 2015 saying little more than: “I now realise that I agree with Nick.” Labour strategists with the ear of the leader are well aware of this conundrum and are starting to work out how to respond.

Their belief is that the coalition has made a big mistake in focusing so much of the pain of cuts on working families with children, and above all women. But they are also acutely aware that to make targeted tax cuts, at the same time as they rebuild their reputation for fiscal credibility, will be no mean feat.

The cost of cuts

Above all, Labour will have to balance intense and contradictory pressures for tax cuts, targeted increases in spending and the rebuilding of its fiscal credibility. Harder still, any new tax cuts will be expensive. Given the size of low-to-middle-income Britain, a few billion pounds won’t stretch far; a meaningful cut is likely to cost over £10bn. In view of the fiscal outlook, Labour strategists realise that they will have to raise taxes for some in order to cut for others – as do those Liberal Democrats who accept that, by the next election, public spending will need to recover with growth rather than be cut further.

In the years ahead, however, the crisis of living standards will lead to something rather like a primal scream from low-to-middle-income households, demanding relief as they become even more resentful of growing wealth at the top. The politics of taxing affluence in 2015 won’t be the same as they were in 2010, never mind 1997: on this matter, the past doesn’t provide a guide to the future. As Obama showed in 2008, it is possible to forge a common set of interests between low- and middle-income earners and a narrative on tax that speaks to the extraordinary times in which we are living.