How can the ideas of history’s greatest economists – from Adam Smith and David Ricardo through Joan Robinson and Milton Friedman to Douglass North and Robert Solow – help us think about the biggest economic challenges of our time? Linda Yueh‘s new book seeks to answer this question through studying 12 economists whose thinking has changed the world. She discusses her work with Artemis Photiadou.

The Great Economists: How Their Ideas Can Help Us Today is available to buy here.

What was your main aim in writing this book and how did you choose which individuals to include?

I was interested in finding ways to address our biggest economic challenges, such as why are wages so low? Learning the lessons from history and from the ideas of the great economic thinkers seemed like a good way to start. I also enjoy biographies, so this book offered a chance to write about the lives of some of the most influential people over the past two centuries. Although they were all successful in shaping the world around them, it was intriguing how many of them were critical of their productivity and not doing more! 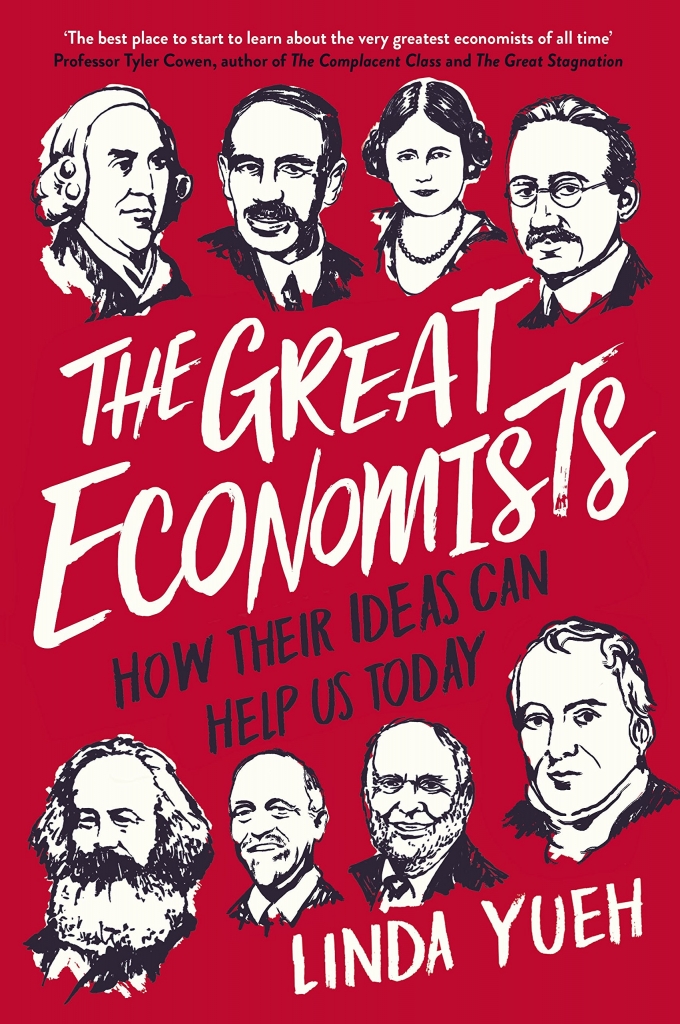 Did studying economists from different schools of thought make you rethink any of your own assumptions about how the economy works?

Especially because my work is based on data, my empirical research including my Macroeconomics textbook (co-authored with Graeme Chamberlin) embody quite a lot of the ‘new neoclassical synthesis’ that characterises macroeconomics today. In other words, the work of many academic economists draws from the most pertinent parts of New Keynesianism, New Classical Economics, and Monetarists. Even Marxist thinking has come back in some fashion, though my work in my previous books (e.g., China’s Growth) had shown how little of the communist approach to economics exists even in the most successful country to have adopted it.

Over the past decade the economics profession has been criticised for a perceived collective failure to identify the systemic weaknesses that led to the 2008 financial crisis. Do you feel that that critique is fair, and does it tell a story about the decline of the discipline from when it was defined by these ‘great economists’?

It’s a fair critique and strongly suggests that there are lessons to be learned from the 2008 crisis. There is a shift in the economics profession towards more empirical analysis, coupled with a push for greater engagement with the ‘real world’, both of which would help. Indeed, the Great Economists that I write about actively engaged with the big issues of the day even if the answers were imperfect. Today’s academic economists tend to have a narrower focus, so there are fewer generalists than before. Generalists are the ones who would be well placed to spot links between the financial markets and economic forecasting since they would be working on the big economic picture, rather than the current divide between those who work on financial economics and the forecasters.

When it comes to responses to the financial crisis, would any of the individuals in the book have supported the British government’s decision to pursue austerity?

I have a chapter dedicated to this very question. The chapter starts with the austerity debate during the 1930s when the Keynesian revolution took off and goes through the later critiques of Keynesianism by other great economists from the other side of spectrum who were opposed to government deficit spending. I then discuss the current austerity debate and how these decisions will affect our future economic growth.

One of the key themes in policy debates since the recession is the ‘left behind’. Is there one particular economist whose thinking could help the losers of globalisation?

Paul Samuelson, who I write about in the chapter on globalisation, is best placed to help us think about how to help those who have been left behind. America’s first Nobel Laureate developed the theory of factor price equalisation that showed how globalisation depresses the wages of workers in the sectors opened up to trade in rich countries. He was a generalist like the others, so he also wrote about how to fashion optimal economic policy to address this issue, which requires adopting the stance of an ethical observer. Akin to John Rawls’ ‘veil of ignorance,’ Samuelson’s idea is for policymakers to position themselves on a policy without knowing how they would be affected. But, he also pointed out how difficult it is to get policymakers to act sometimes. An advisor to US Presidents, he observed: “I can’t think of a President who has been over-burdened by a knowledge of economics.”

Considering the years you cover, it was almost inevitable that the ‘great economists’ would be white and all but one would be male. Would you say there is diversity in who influences economic thinking today, or are 21st century ‘great economists’ still white men?

The Great Economists of an earlier vintage who wrote the models that define the profession were indeed working at a time when there were numerous barriers for women and little diversity. But, their ideas have been modified by a more diverse set of economists. Even among the Greats in my book, I include the Cambridge economist Joan Robinson who further developed Keynesianism by establishing the new field of imperfect competition in the 1930s. I also write about Arthur Lewis from St Lucia whose work on development (Lewis model) was recognised with the award of the highest prize in economics, the Nobel Prize, in 1979. But, I also write about the persistent gender imbalance in the subject. Of the more than 50,000 academic and research economists whose work is listed in RePEc, less than one-fifth are women. But seeing the interesting research being done in economics, I’m confident that the 21st great economists would be a more diverse mix.

Note: Linda was speaking at an LSE IDEAS event in April 2018; a podcast is available here.

Linda Yueh (@lindayueh) is a Fellow in Economics at St Edmund Hall, Oxford University, Adjunct Professor of Economics at London Business School, and a Visiting Senior Fellow at LSE IDEAS.