2012 is set to be a big year for London, with the upcoming London Mayoral elections and Olympic Games. Ahead of the first London Policy Conference next week, Guy Lodge finds that, unusually for a devolved region, neither the Mayoral candidates nor the public are seeking further devolved powers.

This week Ken Livingstone tried to regain the initiative in the battle for City Hall by focusing his campaign on reducing the cost of public transport by promising to slash London fares by 7 per cent. His nemesis Boris Johnson predictably claims the proposal is unaffordable.  Voters can also expect rows between the main two protagonists over policing and police numbers in particular. The election might not be taking place for another six months but the contest to be London’s next Mayor is well and truly underway. What’s more it is taking place in a seminal year for London as the capital plays host to the Olympics and continues to come to terms with the legacy of this summer’s riots.

To help think through the major challenges facing London IPPR has teamed up with the Centre for London to host the first London Policy Conference, an event that is set to become a major landmark in the city’s calendar. Boris and Ken will both give keynote speeches outlining their respective visions for London. Curiously it is unlikely that either of them will argue for more powers for the mayoralty. Curious because in most other devolved settings political discourse tends to be dominated by parties and candidates demanding more powers for the institutions they are seeking to run. It is striking to compare developments in London with those in Scotland and Wales. In the latter there have been persistent calls to enhance the legislative and fiscal powers of the Scottish Parliament and Welsh Assembly.

Before 2016 Scottish voters are likely to be given the choice between full-scale independence and what is termed ‘devo-max’ , a hazily defined proposition that would involve devolving responsibility for most of Scotland’s domestic affairs to the Scottish Parliament, including most taxes and perhaps also large aspects of the social security system. Wales has just gained primary legislative powers following the 2011 referendum  – and before the ink was dry on this new settlement, a commission has been set up to consider the case for handing the Assembly stronger fiscal levers.

But in London, beyond the acquisition of ad hoc powers over housing and planning, there has been no concerted effort to radically shake-up the relatively weak position of the mayor. There has been no Calman or Holtham Commission to review the powers of the Mayor. Why is this? Politics plays a part: historically the Conservatives in particular have been suspicious of London-wide government. Nor, unlike in Scotland or Wales, is there a London nationalist party providing impetus for constitutional change.

What about public opinion? Do Londoners want more powers? Here some clues are provided by a poll commissioned jointly by Cardiff and Edinburgh Universities, and IPPR. As Figure 1 makes clear there is little popular demand for boosting the powers of the Mayor. Most Londoners believe that ‘we should leave things are they are now’. Compare this with the 43 per cent of Scots who want to see a radical extension of Holyrood’s responsibilities. 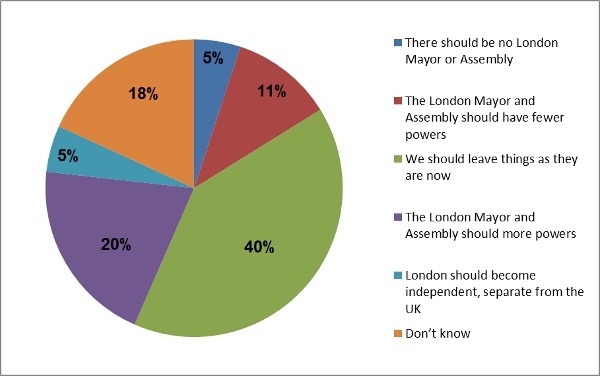 Perhaps this reflects a general satisfaction among Londoners with the status quo – or perhaps Londoners think the Mayor has more power than he actually does. We can probe this further by asking Londoners to distinguish between which elected body has the most influence over the way London is governed, and which should have the most influence. Figure 2 reveals that while Londoners appear to like self-government and believe that the UK government should have less influence over London than the Mayor – they would also like to see the Boroughs exercise considerably more influence than they currently do. We can only speculate but might Londoners be less inclined to support more powers for the Mayor because they fear it will come at the expense of Borough powers?

Figure 2: Who has and who should have most influence over London 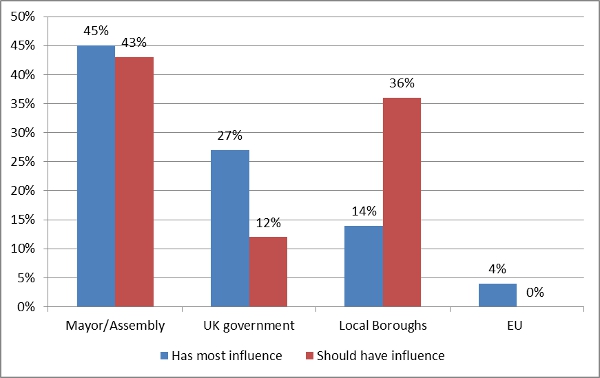 Figure 3: When asked to indicate how attached they were to London, England, the UK and Europe, Londoners gave the following response: 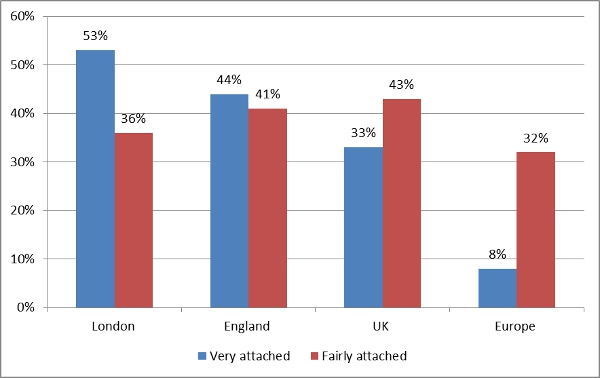 Figure 4: When asked how proud, if at all, people were with certain identities, the response was: 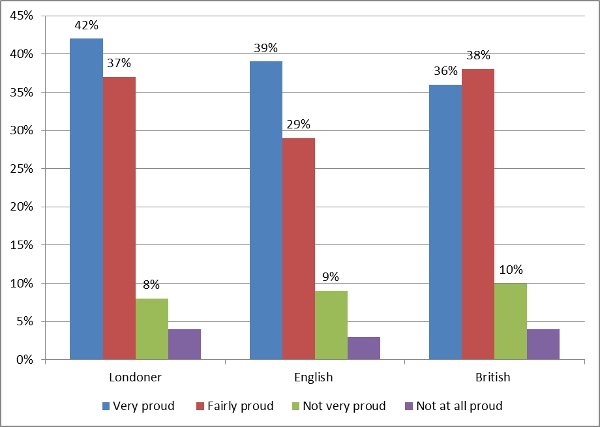 The lack of support for more powers might be considered more surprising when we consider the strength of pride and attachment Londoners have for their city. According to our poll nearly eight out of ten London residents say they are proud to be a Londoner – and that an attachment to London is stronger among Londoners than an attachment to either the UK or England.

Two things might be said in conclusion. The first is that is it not necessarily a bad thing that political debate in London is not dominated by constitutional questions. They can often distract from more salient issues. Secondly, these things tend to be dynamic: as Scotland and Wales continue on their constitutional journey it might be that this momentum triggers calls for reform in the capital.

The full results of the Future of England poll will be published early in 2012 and provide a comprehensive examination of attitudes in England to issues of nationhood, identity and governance.

There is a woeful lack of affordable homes in rural areas. Greater leadership from local authorities to encourage more locally-initiated sustainable development may offer a first step towards more affordable homes.

The Government’s Localism Bill gives local authorities freedom to do what central government wants. If true ‘localism’ is to develop, the government must change its thinking.

Tall buildings have productivity benefits for workers and prestige for firms. No wonder firms are willing to pay a premium to work in them.