A recent article on the London mayoral election suggested that the way the public voted showed that a majority of people did not understand the voting system used. Patrick Dunleavy explains why this criticism of the voting system is quite unfounded.

Looking back at the mayoral election in London, James Ball writing in the Guardian Comment section outlines some problems as he sees it with the Supplementary Vote system used to elect London’s powerful mayor.  He writes:

The vast majority of voters decided to use their second preference vote: 1.76 million second preferences were cast, around 80% of the electorate. But only around one in 10 of these were actually counted towards the total. Of the 346,000 or so people who voted for one of the minority candidates, only 185,000 actually cast their vote in such a way as to influence the result.

More than 1.1 million people cast their second preference for a candidate with no chance of being in the run-off for the final two. There are two ways to interpret the figures: a large portion of Londoners don’t fully understand the voting system, or they are using it in a remarkably sophisticated way to send subtle signals to minority candidates.

If this was the case, there does seem to be a problem. After all, only 2.2 million people voted in total in this election (a 38 per cent turnout), and if half of them supported second preference candidates who were already foreseeably going to be knocked out of the final count, then is Ball not right to conclude that this could not be a conscious choice on the part of so many voters, but instead must show ‘that they do not understand the system?’

My table below shows that only just over 346,000 voters supported candidates ranked third or lower on the first preference round. At most then, only three out of ten of the 1.1 million second preference votes for candidates knocked out on round 2 could mathematically have come from people who voted twice for eliminated candidates. But in fact, more than half of these voters not choosing Boris or Ken on the first round (i.e. 185,000 people) then opted to support one of the two in their second preference vote, so voting to decide the outcome.

That leaves 989,000 Londoners who cast second preferences votes for candidates who had no chance of being in the final two. Where did they come from? Again, the Table below shows that all these people had already voted for Ken or Boris on their first preference vote, but were now choosing a second preference – e.g. someone who backed Ken voting Green on second preference, or a Boris supporter voting UKIP. 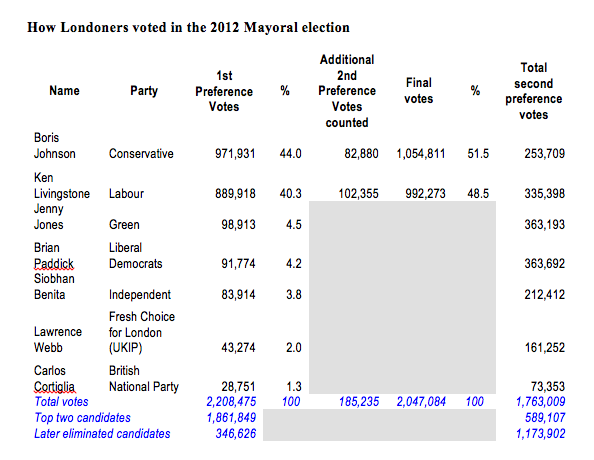 So the majority of these voters cast their preference for one of the top two people in the election, and contributed to one of them winning. Then they used their second preference vote to signal support for one of the remaining candidates from a smaller party. What on earth is the reason for supposing that these voters did not know what they were doing? They cast an effective first vote, and used their second vote to signal a second preference.

In fact the vast mass of Londoners voted completely effectively in this election, as in the past. The number of people who choose to support two eliminated candidates across the election as a whole – and whose votes were not therefore ‘eligible’ in the second round of the election – was just over 161,000, or 7 per cent of the initial first preference votes.

All we know about these people (who cast two votes ineffectively) is that they decided for their own reasons to vote for candidates who could not win rather than support Boris or Ken, who could. Yet I can easily see a voter wanting to support both the Greens and the Lib Dems, or both UKIP and the BNP, and believing that this was more important for them than influencing the Boris/Ken outcome. There is no basis at for interpreting this to means that such voters didn’t understand the system. We cannot in any way devalue or demean their choices.

Ball does have some potentially useful comments later on about the weakness of the London Assembly in terms of constraining the Mayor. But again he misleads on voting systems, by critiquing the fact that the Conservatives won 9 seats on the Assembly (38 per cent) from a 32 per cent vote share – and thus have a ‘veto-block’ on Assembly decisions. A key issue here is that the Assembly has only 25 members in it, so even if it used the most hyper-proportional voting system in the world it could only be an accurate reflection of vote shares within a range of plus or minus 4 per cent – because each time a seats changes hands (potentially carried by a single vote) it shifts by 4 per cent who gets what in the Assembly.

A second reason why the Conservatives are over-represented is because there is a 5 per cent votes threshold for winning any Assembly seats at all – a measure that is designed to stop small parties like the BNP winning seats without gaining significant support. So the Conservatives (together with Labour and other parties who did win seats) benefit from getting part of the smallish seats share that would otherwise go to the ‘below threshold’ parties. Yet the threshold is a safeguard that most people will feel defends democracy against extremist parties, rather than diminishing it.

Summing up, the Supplementary Vote electoral system again worked very well in London in 2012. It produced a clear winner, accepted by all the participants and all London’s voters, for the fourth time in a row. And it allowed London’s sophisticated and intelligent voters to send strong signals about their multiple preferences, while yet deciding the race between the top two candidates. Similarly the Additional Member System used for the Assembly worked very well, producing a diversity of parties and reflecting accurately how people voted.

Patrick Dunleavy is Professor of Political Science and Public Policy at the London School of Economics and Political Science. He has authored and edited numerous books on political science theory, British politics and urban politics, as well as more than 50 articles in professional journals. 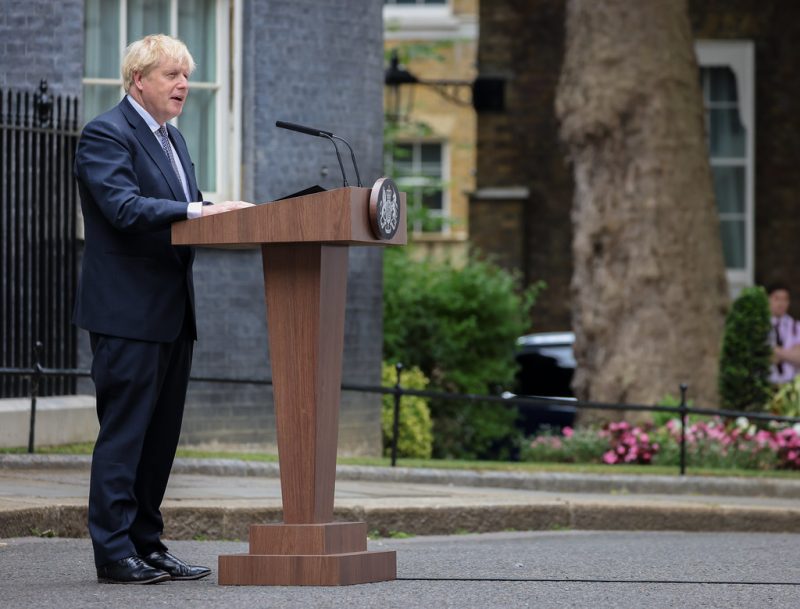