The internet is now a ubiquitous force in our lives, with more than four fifths of the UK population online. And in an age of fiscal austerity there is considerable pressure for government to more effectively cut costs by shifting more and more public services online. However, Chris Gilson finds that government policies aimed at getting more people online may not close the ‘digital divide’, and that the aims for UK broadband speeds are anyway underwhelming.

In some policy the new Conservative-Liberal Democrat government could be seen as essentially continuing the policies of the previous administration. Martha Lane Fox (one of the founders of the travel giant, Lastminute.com) was appointed by the Labour government in June 2009 as its Digital Inclusion Champion, with the aim of getting online the 4 million people who are most socially and digitally excluded. In March 2010, she became the head of the new Digital Public Services Unit. This quango has now been axed by the new government even before it stated life, but Lane Fox retains her Digital Inclusion Champion role.

On the 12 July David Cameron and Lane Fox launched the Manifesto for a Networked Nation, pledging to get online by 2012 everyone in the UK who is not yet online. The report estimates that around 10 million people in the UK do not have access to the internet, or have never used it, and that there are enormous benefits to citizens from internet use.

Yet on the same day as Lane Fox’s Manifesto launch, the Culture Secretary Jeremy Hunt announced that the previous government’s target for the provision of ‘universal’ broadband at a rate of 2mbps, would be pushed back from 2012 to 2015. As 2mbps is the realistic minimum speed for consumers to be able to use high-end digital services (such as the BBC’s Iplayer service), this means that many people, while technically being given access to online services, may miss out on some of the most important parts of the digital world.

In both historic and international terms, achieving 2mbps speeds is a fairly unambitious broadband target. In 2008 a survey suggested that the UK’s average broadband speed was already 3mbps, and this level has risen only a small amount to 5.2 mbps as of this week. Contrast this with South Korea, which aims to have 1Gbps download speed available by 2012 in major cities, and speeds of 50 to 100 mbps in smaller areas. Even the USA aims to have speeds as high as 100 mbps available to 100 million households by 2020.

This delay in getting what might be considered ‘proper’ broadband to a large group of people in the UK is especially worrying in the light of many increasing comments that those are not online are ‘second class citizens’. In December 2009, Lane Fox said; “I think that shutting down [non-internet] services would be the best way of carrying through the most amount of people”. Might this cause a new ‘digital divide’ between the ‘broadband haves’ and the ‘broadband have-nots’?

In any case, putting people online may also be affected by problems of illiteracy and innumeracy that are closely related to digital and social exclusion. Research by the then Department for Education and Skills in 2003 suggested that 5.2 million people lacked functional literacy and 6.8 million people lacked functional numeracy. More recent research suggests that around 20 per cent of 16-19 year olds are functionally illiterate and innumerate. Getting people in these categories online may only give them very small benefits: they may even find themselves more deeply excluded due to their lack of literacy and numeracy skills, which may preclude them from using ‘online-only’ services despite having internet access.

Certainly, virtually all UK public sector online services remain resolutely text-based, and demand a very high reading age to understand them. An LSE Public Policy Group study for the National Audit Office in 2007 found that government sites are almost completely devoid of the graphics, audio, video and social media features available on some private sector sites, and that position appears to have barely changed since.

These problems aside, it is important to stress that, if provided effectively, online access has definite economic advantages for the citizen and for government, especially if illiteracy and innumeracy can be overcome. Recent research from the LSE Public Policy Group, also using data from the 2009 Oxford Internet Survey, estimated that giving internet access to those with the deepest level of digital exclusion (about 4-6 million people) would generate benefits of at least £3.8 billion for citizens, and an in addition nearly £2.8 billion to the economy at large. The study calculated that it would cost nearly £3.3 billion over 5 years to put nearly 6 million people online, and so using a cost-benefit calculation over 5 years, there would be a net benefit of £2.3 billion, as the graph below shows: 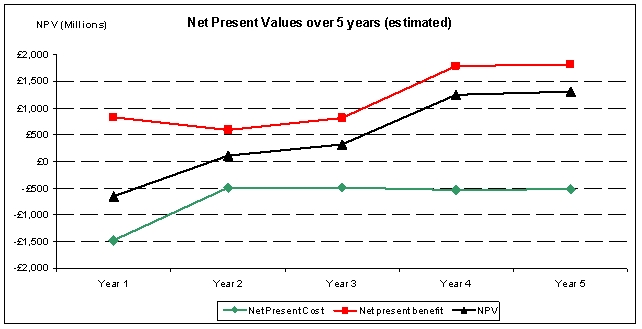 The UK faces a tough challenge in getting millions of people online. Online engagement, especially for the most marginalised groups will not be achieved if government goes about it in a piecemeal fashion. And as online access becomes more and more crucial to modern industrial developments, especially ‘cloud computing’ and new control technologies, the UK risks paying a high prices indeed if firms and customers gain access to ‘real broadband’ only many years behind the country’s leading overseas competitors.

If the government wants to introduce a real revolution in law and order, it should devolve powers and budgets for all criminal justice and emergency services to PCCs