Richard Layard and colleagues have recently published a report concerning treatment of mental health in the NHS. Here is the executive summary of that report, published by the Centre for Economic Performance’s Mental Health Policy Group.

There is one massive inequality within the NHS: the way it treats mental illness as compared with physical illness. Here are six remarkable facts.

Mental illness is generally more debilitating than most chronic physical conditions. On average, a person with depression is at least 50% more disabled than someone with angina, arthritis, asthma or diabetes. Mental pain is as real as physical pain, and it is often more severe. 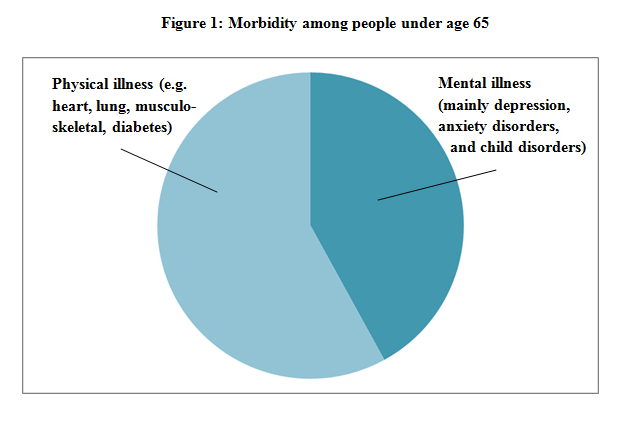 Yet only a quarter of all those with mental illness are in treatment, compared with the vast majority of those with physical conditions. It is a real scandal that we have 6,000,000 people with depression or crippling anxiety conditions and 700,000 children with problem behaviours, anxiety or depression. Yet three quarters of each group get no treatment. One main reason is clear: NHS commissioners have failed to commission properly the mental health services that NICE recommend. The purpose of this paper is to mend this injustice, by pressing for quite new priorities in commissioning. This might seem the worst possible moment to do this, but that is wrong for the following reason.

This is mainly because the costs of psychological therapy are low and recovery rates are high. A half of all patients with anxiety conditions will recover, mostly permanently, after ten sessions of treatment on average. And a half of those with depression will recover, with a much diminished risk of relapse. Doctors normally measure the effectiveness of a treatment by the number of people who have to be treated in order to achieve one successful outcome. For depression and anxiety the Number Needed to Treat is under 3. In the government’s Improved Access to Psychological Therapy programme, outcomes are measured more carefully than in most of the NHS, and success rates are much higher than with very many physical conditions.

Effective mental health treatment can also generate other large savings to the government, for example by increasing employment or improving the behaviour of children. As one example, the Improved Access to Psychological Therapy programme has almost certainly paid for itself through reduced disability benefits and extra tax receipts. Likewise, when children are treated for conduct disorder, the costs are almost certainly repaid in full through savings in criminal justice, education and social services.

The need for a rethink is urgent. At present mental health care is, if anything, being cut. It should be expanded. This is a matter of fairness, to remedy a gross inequality, and it is a matter of simple economics – the net cost to the NHS would be very small. When everyone praises early intervention, it is particularly shocking that the sharpest cuts today are those affecting children.

The NHS aims to save £20 billion on existing activities in order to finance new activities required by new needs, old unmet needs, and new technology. Nowhere is the case for extra spending more strong. In mental health there is massive unmet need and there are new treatments which are only beginning to be rolled out. We appeal to commissioners to think again.

Professor Richard Layard, the Baron Layard, is Director of the Well-Being Programme at LSE’s Centre for Economic Performance. He is a labour economist who has worked for most of his life on how to reduce unemployment and inequality. He is also one of the first economists to have worked on happiness, and his main current interest is in how better mental health could improve our social and economic life.