Can temporary protection from trade with advanced economies foster the development of ‘infant industries’ in developing countries? Reka Juhasz considers a natural experiment: Napoleon’s wartime blockade of British exports, which allowed protected regions to build capacity in the new technology of mechanised cotton spinning and later to compete successfully in international markets.

Legend has it that in the late 1960s, Park Chung­hee, South Korea’s military dictator, exhorted the car manufacturer Hyundai to start building ships, as there was a sudden increase in global demand for oil tankers. Not only did the country have no experience in shipbuilding, it didn’t even have a shipyard. The domestic market at that time was heavily protected from foreign competition, with firms like Hyundai highly subsidised and encouraged to export.

Bulding the ships and the shipyard went hand in hand. Lack of experience meant that entire parts of the ship had to be dismantled and reassembled when things went wrong. Despite these setbacks, two years later, the initial orders were delivered on time – and today South Korea is home to the three largest shipbuilders in the world.

Over the years, governments attempting to kick­start industrialisation have experimented with various forms of infant industry protection. Germany and the United States, two industrial powerhouses of the late nineteenth century, industrialised behind highly protective tariffs. China and the East Asian growth miracle are more recent examples. But we must add to this list all the cases in which seemingly similar infant industry protection failed spectacularly.

In the 1980s, countries across South America were left with globally uncompetitive but politically well-connected industries after decades of ‘import substitution’, a particular form of infant industry protection. And countries in Africa are littered with ‘white elephants’ – grand infrastructure projects that never delivered on the promised gains.

Despite centuries of policy ‘experimentation’, the debate on whether infant industry protection works seems no closer to being resolved. This is partly because measuring the effect of protection on the development of an infant industry is tricky:

My research uses a historical episode from the nineteenth century to shed light on the question of whether infant industry protection can work. I show how mechanised cotton spinning developed and subsequently became competitive in parts of the French Empire as a result of temporary changes in the extent to which different regions were exposed to British trade.

The appealing aspect of this setting is that regional differences in temporary infant industry protection – shaped by events determined outside the country’s borders – make it possible to compare regions in the same country that became better protected from trade with regions that remained more exposed to trade. Trade protection of various regions was shaped by the effect of Napoleon’s wartime blockade of trade between Britain and France.

During times of war, countries often blockade one another’s ports to impose economic hardship. Napoleon lacked the naval power to implement such a blockade of British ports, so instead he used his influence over much of Europe to attempt to stop British goods from entering continental ports. Ports were closed to British goods and the French military was active in enforcing the blockade along the European coastline.

From the outset, it was clear that the undertaking was huge: successful implementation of the blockade implied that all countries would adhere to the blockade simultaneously. In reality, trade between Britain and the continent did not come to a standstill as Napoleon wanted, but rather goods were smuggled into France via ports outside the French Empire that remained open to trade with the British.

Importantly for my analysis, while the blockade was generally effective along the coastline of the French Empire, it was unevenly successful outside the country’s borders. In particular, while implementation of the blockade was for the most part effective across parts of northern Europe, it was far less successful in southern Europe, where the British were militarily stronger (see Figure 1).

Figure 1: Ships sailing between Britain and continental European ports in 1802 (before the Napoleonic wars) and 1809 (during the blockade)

The inherent asymmetry in military power was further undone by the Spanish insurgency against Napoleonic rule. This event proved catastrophic for the blockade, as from the onset of the insurgency, the entire Iberian peninsula became open to British trade and provided a direct overland link to France.

Geographical variation in the effectiveness of the blockade outside the French Empire meant that trade between Britain and France became temporarily more expensive for some French regions than others. Regions within France witnessed smaller or larger increases in their costs of trading with Britain depending on the extent to which trade was displaced from direct to more indirect, and hence more expensive, trade routes. These routes entered the French Empire overland via ports that remained open to trade with the British.

My analysis focuses on the development of mechanised cotton spinning, as this was a new technology that French spinners had not adopted on a wide scale prior to the Napoleonic wars. Consistent with this technology lag, firms in France were producing cotton yarn at twice the British price.

Following the invention of the spinning jenny in Britain in the late eighteenth century, cotton became a hugely important industry. The new technology led to enormous productivity increases in the production of yarn, and it was key to Britain’s dominance of the industry. Cotton also played an important role later in Belgian, French, German and US industrialisation. The unskilled labour intensive textiles sector was generally the first to draw workers away from agriculture and into full­time factory work – and it was thus an important step in the development process.

Nineteenth century cotton manufacturing also had strong ‘learning spillovers’ of the kind that are important to infant industry arguments. In Britain, the early machines were crude devices and workers were instrumental in improving them. What worked in one firm was soon copied by others. A lot of the technology required in spinning was new, and for this reason, the cotton mills were built by a handful of men who had acquired their skills on the job. Each new factory was a little bit better because of the experience acquired from building the previous one.

Entrepreneurs and the government in France sent industrial spies to Britain to copy the new machines, which could not be exported because of a government ban. Despite artificial barriers on technology diffusion, many of the first cotton mills were set up by British engineers and entrepreneurs who brought workers across the Channel to show French spinners best practice techniques. Yet on the eve of the French Revolution in 1789, there were only 900 spinning jennies in France, while Britain boasted 18,000.

During the 10­year period of the blockade, cotton production capacity in the new technology quadrupled in France. But development was regionally uneven (see Figure 2). Consistent with increased protection in northern regions of the French Empire, spinning capacity in those regions increased enormously, while firms in areas around the Spanish border went bankrupt.

Larger increases in spinning capacity were systematically related to areas that received increased protection from British trade as a result of Napoleon’s blockade – and the effect of increased protection was large. To rule out alternative explanations driving the results, I show that the rupture in trade with Britain did not have the same effect on woollen spinning and leather tanning, two closely related industries that were less intensively traded with Britain and which did not experience the same degree of technological change.

Firms located in these regions were also more productive in the long term. French exports of cotton goods increased after the end of the Napoleonic wars, and they increased relative to British cotton exports, showing that the industry was able to compete successfully in international markets (see Figure 3). Was France bound to become competitive in cotton by this time? 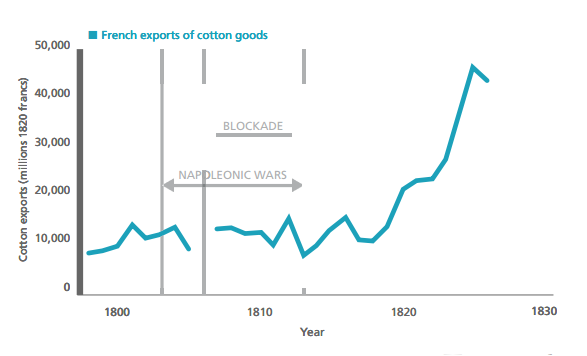 The evidence suggests that this is unlikely. As late as 1850, more than three decades after the end of Napoleonic rule, Belgium and France, two areas of the empire that enjoyed high levels of protection from British trade, had larger cotton industries than other European countries. Most strikingly, the domestic cotton industry was generally small in countries that had been exposed to higher levels of British competition throughout the blockade.

This episode provides evidence of the fact that a mechanism similar to the one emphasised by advocates of infant industry protection for centuries may be at work in certain settings. In many ways, industrialisation in France, in which the mechanisation of cotton spinning played an important role, is also representative of the development path that many countries have followed as large parts of their workforces move out of agriculture and into manufacturing. This suggests that similar forces could be at work in countries hoping to industrialise in the twenty­first century.

But a number of important qualifications are needed before translating the findings from this episode into policy prescriptions. Initial income differences between nineteenth century Britain and France were small in comparison with differences between rich and poor countries today. On the one hand, this suggests that mechanisms that inhibit countries from moving into certain sectors may be even more significant in modern settings.

On the other hand, small initial differences also meant that the conditions necessary for fostering modern industrial production were already in place prior to the Napoleonic wars. One reason why infant industry protection in practice may often fail is that policy­makers try to foster industries for which their country does not have the necessary underlying conditions.

A further difficulty in translating the findings in this setting to direct policy protection from British competition on mechanisation in France was made possible by the fact that protection was not a result of economic policy. In practice however, infant industry protection is almost always the result of political intervention in the economy. Another important reason for so many failed infant industry projects may be the fact that the political process is captured by special interests. As such, resources may be allocated not towards sectors in which the country has high growth potential, but rather, towards sectors in which the economy cannot and will not be able to compete in the future.

This article summarises ‘Temporary Protection and Technology Adoption: Evidence from the Napoleonic Blockade’ by Reka Juhasz, CEP Discussion Paper No. 1322.

Note: The article was originally published in the CEP’s Centrepiece magazine gives the views of the author, and not the position of the British Politics and Policy blog, nor of the London School of Economics. Please read our comments policy before posting.

Reka Juhasz is a Research Assistant in CEP’s globalisation programme. 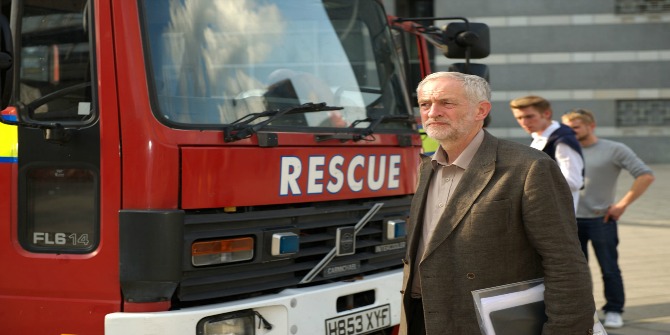