England’s most widely used indicator of young people’s education and labour market status is the NEET category – ‘not in education, employment or training’. By making comparisons with how France and Germany measure school leavers’ progression and achievement, Hilary Steedman of the LSE’s Centre for Economic Performance argues that NEET is no longer good enough.

Starting out in working life is getting harder for young people all over Europe. Accessing the high-quality training that eases the transition and ensures good career prospects is a particular struggle for young people with below average school attainments. To understand and act to improve the outcomes for these young people, European governments need good information on which to base policy decisions. Statistics collected by national governments underpin such decisions and these ‘headline numbers’ help to drive policy debate. They can also send a powerful message to young people and their parents about the education and training routes that lead to good labour market transitions.

Recognising the role played by headline numbers in shaping policy and aspiration, the official French government advisory body on education – the Haut Comité d’Education (HCE) – commissioned Eric Verdier from the University of Aix-Marseille and me to coordinate a comparative study of measures of education outcomes and labour market transitions of the least well-qualified group of young people. France, Germany and England were selected for in-depth study. Our study reveals both marked differences between countries in how the ‘at risk’ group of low-attaining school leavers is analysed statistically and the choice of variables on which to base the statistical description of school to work transitions. But it also reveals some important convergences.

France has moved away from a strictly education-based classification of school leavers – traditionally a combination of the final class completed and the highest nationally recognised school diploma obtained. The revised classification of school-leavers derives from greater commitment to the importance of a post-16 diploma for all – awarded on success in a two or three year vocational or general course of education and/or training. French statistics now distinguish between ‘early leavers’ (sans qualification) who have no recognised certification (9% of 20-24 year olds in 2009); those (sans diplômes) who complete a post-16 two or three year course but do not pass the examinations for a full certificate or diploma (a further 9%); and those (82%) who complete and pass successfully (diplômés). The employment rates for these three groups of young people are published annually. They tell a powerful story both to policy-makers and young people about the vital importance of gaining a full vocational certificate or general diploma or, failing that, at least completing the course.

The message for teachers, parents and school students is clear: a full vocational qualification reduces the probability of unemployment by almost two thirds relative to early leavers; and achieving the Bac diploma (the French equivalent of A-levels) reduces it by a factor of four. Even staying the full two or three year vocational course without passing the examination is beneficial for employment chances. France relies, perhaps excessively, on school-based nationally standardized vocational and general education for labour market preparation. This provision has inadequate capacity to react to rapidly changing labour market demands. French apprenticeships overcome this problem but they can provide for only a small proportion of those in vocational education. Nevertheless, the emphasis on successfully completing a two or three year course of vocational or general study at school produces a young population in which two thirds hold a Bac diploma and a further 20% have two or three years of vocational training.

The contrast with Germany could not be greater. Well over half of all school leavers expect to enter apprenticeship. School marks are of importance for these 16 year old German school leavers only because higher marks increase the likelihood of gaining an apprenticeship place. Without the labour market recognition that the apprenticeship qualification confers, the employment outlook for German school leavers is grim. ‘Not qualified’ in Germany equates to ‘not trained through apprenticeship’. German labour market transition statistics are overwhelmingly devoted to analyzing and understanding access to apprenticeship places. For almost 20 years, following the shock to the economy of the reunification of Germany in 1990, German states and the federal government struggled to meet the demand for apprenticeship places from young people. Many with low level school qualifications faced long ‘waiting periods’ spent in special measures and some never gained a place.

The most high profile measure of the German government’s competence in education policy was and is the annual ‘matching’ of apprenticeship applicants to places. Only in 2010 were apprenticeship places close to matching demand from applicants. In 2009, 15% of 20-29 year olds had not received apprenticeship training and consequently faced poor labour market outcomes. The remaining 85% had completed either a three year apprenticeship or three years of full-time education post-16.

Education statistics published in England do not identify a ‘no qualifications’ category of young people, as in France, nor a group without recognised occupational training, as in Germany. The most widely used indicator of young people’s education and labour market status is the NEET category – ‘not in education, employment or training’. Yet NEET young people are not a ‘no qualifications’ category. Nearly three quarters of the 15% of the age group classified as NEET in 2010 had some GCSE passes. Of a smaller group – those who have been NEET for more than 12 months – over half had some GCSE passes (see Figure 1). 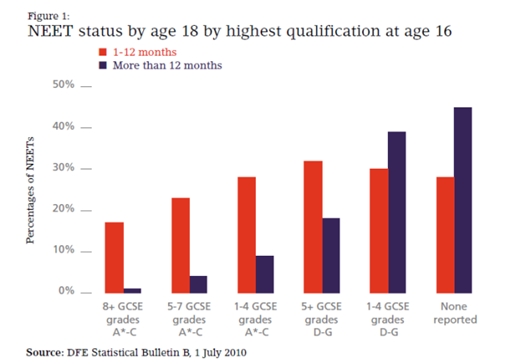 The difference from France and Germany is the emphasis in England on participation regardless of content or value – any job, any training, any course removes a young person from the ‘at risk’ category. In both France and Germany, the message from the headline number on school leavers’ transition to work is the importance of progression and achievement – progression to a recognized qualification through an academic or vocational pathway in France and progression through apprenticeship in Germany. These measures help to set clear goals for 16 year old school leavers, clear goals that are lacking in England. In contrast to France and Germany where 85% reach Level 3 equivalence, only half of all 19 year olds in England achieve any Level 3 qualification. Could these differences in goal-setting account for this failure?

According to Alison Wolf’s independent review of vocational education commissioned by the UK’s Department for Education and published earlier this year, ‘at least 350,000 young people in a given 16-19 cohort are poorly served by current arrangements. Their programmes and experiences fail to promote progression into either stable paid employment or higher level education and training’. As the Department for Education sets about implementing the Wolf recommendations for 16-19 education and training, the negative message of the NEET category needs to be replaced by a headline number that reflects and projects the more ambitious goals that Wolf proposes.

This article is based on Les élèves sans qualification: La France et les pays de l’OCDE and can be found online in the Centre for Economic Performance’s Autumn 2011 edition of CentrePiece.