Terrence Casey argues that macroprudential regulation, by smoothening the credit cycle, can temper the major problems with the neoliberal growth model. It is the tendency toward excessive credit growth, producing booms and subsequent damaging busts, and not productive exhaustions that weakens neoliberalism. If financial volatility can be removed, it is indeed a model worth saving as it has undoubtedly produced real growth, albeit in a two steps forward, one step back process.

Debates around austerity continue to generate a good deal of political heat, yet the underlying questions regarding the future of the neoliberal growth model in the wake of the global financial crisis (or GFC) are far more interesting. Many see the GFC as the final nail in the coffin of the free market program, showing it to be an exhausted growth model only kept alive through unsustainable infusions of debt. Major political-economic reconstruction is needed to put things right. Putting aside that such radical reforms have not been forthcoming, is this analysis correct? Is neoliberalism dead? As I detail in a recent paper, the main problem with neoliberalism is not a failure of production, it is a tendency toward excessive credit growth leading to downturns that undermine output gains. Tempering the credit cycle through macroprudential financial regulation is the corrective for this problem.

What, according to critics, is the terminal defect of neoliberalism? “Financialization”, a rather plastic term used to denote the rise in private debt and the increased size and significance of the financial sector, among other things. Far too many of the accounts of financialization fail, however, by interpreting descriptive data (the financial sector got larger) with causal explanations (its size caused the crash). The properly specified version is the debt-driven growth hypothesis (or DDG), epitomized by the works Robert Brenner and Colin Crouch. This starts from the proposition that neoliberalism is underproductive, leading to declining profits and wages. Corporations and individuals have to increase borrowing to maintain consumption and growth. Private debt continues to rise, which is unsustainable over the long term, leading to the disaster of the GFC. If neoliberalism simply restarted, a new debt bubble would form, producing perhaps even greater calamities. Neoliberalism as a growth model is dead yet lives on – a zombie political economy.

While a popular characterization of events, the supporting evidence is not compelling. For example, increased home equity withdraw is used as a primary indicator of debt-driven growth, and it did indeed rise in both the UK and US in the years immediately before the GFC. Conversely, it was at its lowest in the 1990s, when the economies of both states were flourishing. Debt did not drive growth except in the years immediately prior to the crisis. It is an argument for a bubble, not a structural flaw.

Yet there is another way to understand the GFC — the financial instability hypothesis (or FIH), associated with the writings of Hyman Minsky and Charles Kindleberger. Neoclassical economics sees markets as stable and self-correcting. The FIH highlights how markets artificially inflate assets values, inducing procyclical credit growth. Booming markets lead risk to be discounted, with ever more speculative investments being embraced. As more institutions do this, others follow. Risk, rather than being diversified, becomes synchronized. With everyone following suit, the health of each bank becomes increasingly dependent upon other institution’s health. This produces systemic instability and potentially collapse, dragging the real economy with it. Rather than being an equilibrium system that weeds out bad investments, free market economies – especially those with large financial sectors – go through cycles of stability, fragility, and crisis. This can be seen graphically in Figure 1, which shows the credit-to-GDP ratio for the UK (dark line) plotted against GDP. Credit spiked in the late 1980s and early 2000, in each instance just prior to a recession. The greater the spike in credit, the greater the crash. In sum, the evidence is more favorable to understanding the GFC as the collapse of a credit cycle. (Please see the full paper for a thorough exploration of the empirical evidence.) The problem for neoliberalism is not productive exhaustion, it is financial volatility. 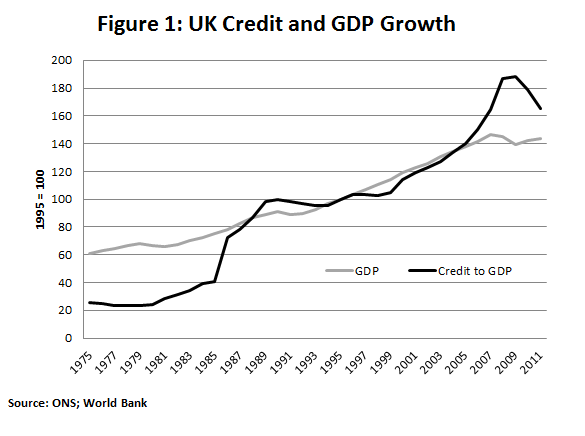 The solution is macroprudential financial regulations, or MPR, which seeks to monitor and control systemic risks. Much as Keynesians called for government spending to counter the business cycle, macroprudential regulations seek to constrain rising credit cycles before they inflate sufficiently to produce a crisis. Policymakers have an array of tools available to pursue this goal, including countercyclical capital ratios or time varying liquidity buffers to capture the dynamic movement of risks, or maximum leverage ratios, to put an absolute governor on financial institution’s risk portfolios. MPR also has the advantage, both from the perspective of the state and market actors, that it is not concerned with specific financial products. By focusing on the overall amount of credit in the system, MPR allows financial markets independence to develop new products and services, the successful regulation of which, because of the speed of innovation, has often eluded regulators anyway. It is still early days yet, but there is a growing recognition of credit cycles as a problem warranting government action, leading to the development of appropriate regulatory tools and institutions (e.g., the Financial Policy Committee within the Bank of England).

Why try to save neoliberalism at all? Critics see naught but failure – disappointing output and rising inequality punctuated by economic collapse. That is a vivid yet incorrect characterization. A more measured conclusion is that neoliberalism delivered the economic goods successfully for an extended period of time. To quote Cambridge University political economist Andrew Gamble, hardly an apologist for the free market, “The financial growth model adopted in the 1980s, whose main drivers were financial services, retail, property and construction in the private sector, and education, health and universities in the public sector achieved remarkable success for the UK economy in the 1990s and up to 2007” (from the British Academy report Economic Futures, 2011, p. 39). Liberalization is only one factor leading to rising inequality, with technological changes and the integration of hundreds of millions of new manufacturing workers from China, India, and elsewhere playing very strong supporting roles. The GFC wiped out income gains of the previous decade, not of the entire neoliberal era. Neoliberalism has produced real growth, but in a two steps forward, one step back process. This is concisely illustrated in Figure 2, comparing British with French and German per capita GDP. The average Briton is comparatively better off than at the start of the neoliberal era, yet it has been a bumpy rise. If that volatility can be removed, it is indeed a model worth saving. 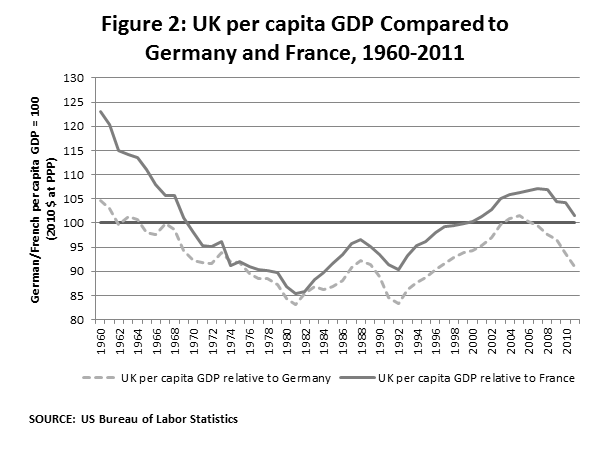 All that being said, MPR is a long-term solution for ensuring economic stability once growth has been reinvigorated, not a mechanism for recovery. Reinvigorating growth and educing both public and private debt is likely to be a long, hard slog. This is perhaps the strongest argument in favor of MPR: recognizing just how damaging credit cycles can be shows how vital it is not to get into that hole in the first place.

Terrence Casey is the Executive Director of the British Politics Group of the American Political Science Association, the editor of The Legacy of the Crash: How the Financial Crisis Changed America and Britain (Palgrave, 2011), and a Professor of Political Science at the Rose-Hulman Institute of Technology in Terre Haute, Indiana, USA. 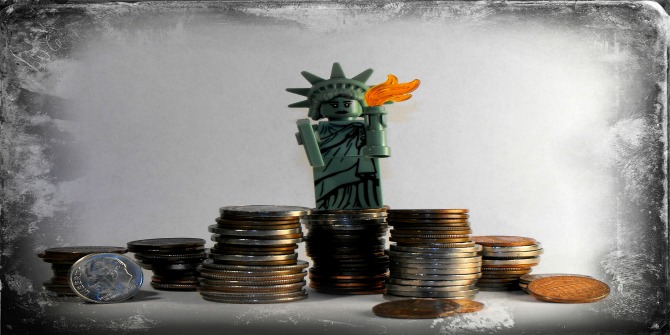